Celebrating the end of finals with my best binder page 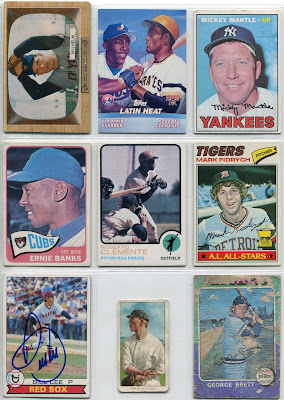 Today was my last day of finals for the semester, which means that I can finally put a little more time into writing for this blog.

I knew that the first thing I'd do once I got off for winter break was chime in on the "Best Binder Page" topic that's been batted around the blogs lately. The idea was the brainchild of one Junior Junkie, and I've had a ton of fun reading everyone's posts on the matter.

Even though I'm about a month late and will probably be the 76th out of 77 people to post about this, I'm honored to finally bring you my best binder page on this little blog.

I particularly enjoyed this topic for a couple reasons. 1) I'm a binder guy, so this fits perfectly within my collecting realm. 2) I like that this isn't necessarily asking for your nine favorite cards, because, as I've found, there is a distinction between good/favorite cards and meaningful cards.

Anyone can own a good card, but meaningful cards are unique to you and your collection.

So, without further ado, here is my best binder page. 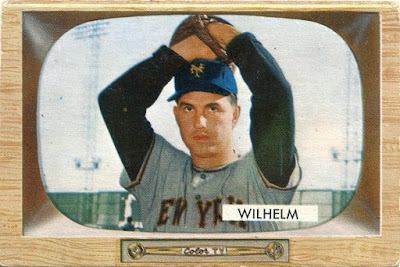 We begin, of course, with the Hoytster.

I learned early on that I probably wouldn't be able to afford collecting the Derek Jeters and Babe Ruths of the baseball card world. I needed to find a guy who I liked, but whose cardboard wouldn't cost me an arm and a leg.

Enter Hoyt Wilhelm. Since I'm a self-proclaimed knuckleball fanatic, Hoyt was the perfect fit. I rushed out to acquire my first "big" card of his soon after, and came back with this '55 Bowman beauty.

The "Color TV" set ranks right up there among my all-time favorite designs, and the fact that this is card #1 in the checklist earns a few bonus points as well. I've acquired dozens of new Hoyts in the years since, but this one remains my favorite.

At least until I spear that white whale... 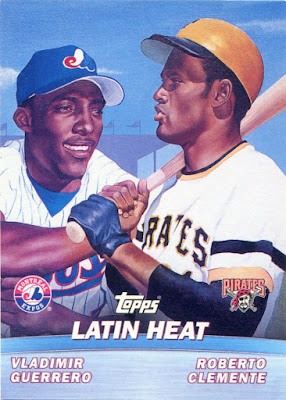 Up next is the only modern card in my best binder page, because I guess I'm just an old soul at heart.

Roberto Clemente and Vladimir Guerrero are 1-2 on my all-time favorite ballplayers list. To have a card that features them together is nothing short of paradise.

Now, I have a couple other Vlad-Clemente combo cards, but this one remains special to me because I've had it since my pre-teen collecting years.

It helps that it's simply a doggone beautiful piece of art as well. 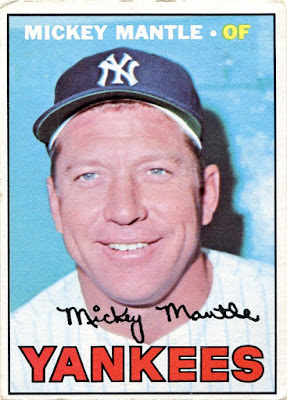 There's a good chance that any card of The Mick would've made this page, but this one was a lock because of the story of how I acquired it.

The longer version is here, but the short version is this: my mom stumbled upon a guy selling baseball cards at a garage sale a couple years ago. The guy had a bunch of boxes strewn around his basement, and, in one of them, I found The Mick.

I had long since assumed that I'd never own anything of Mantle because of the crazy prices his cards command. For $35, though, I took home about four of those long boxes and, while I needed a lot of the other cards I purchased, The Mick was obviously the centerpiece of the deal.

I said it then and I'll say it again: it really was the find of a lifetime. 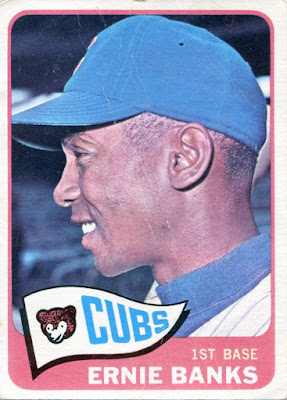 If you were to ask me which card in my collection holds the most meaning to me, I'd probably show you Mr. Cub here.

So many memories are held in this precious piece of cardboard. I acquired it at the now-defunct card shop that shaped so many of my early collecting experiences. I brought it in to show my third-grade teacher during conferences that year. My card-collecting friends oohed and aahed over it.

Of course, it certainly helps that it's a card of Ernie Banks -- the face of the long history of the Cubs -- on my all-time favorite design. More importantly, it is a portal for some of my fondest cardboard memories.

Even all these years later, I'm still oohing and aahing over it. 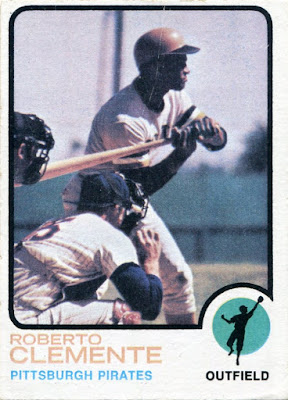 What I'm about to say will kind of spoil the Top 100 Vintage Countdown I've been planning (and have yet to get around to), but here goes: this is my all-time favorite baseball card.

Roberto Clemente is my all-time favorite ballplayer, and, since Clemente tragically died in a plane crash on New Year's Eve in 1972, this card was issued posthumously. I've always kind of liked that Topps didn't put an "In Memoriam" tag on it. They let the collector find meaning in the card itself.

Somehow, the image of Roberto Clemente checking his swing in front of a clear blue sky makes for a fond goodbye to one of baseball's all-time greats.

It is, and forever will be, the centerpiece of my best binder page. 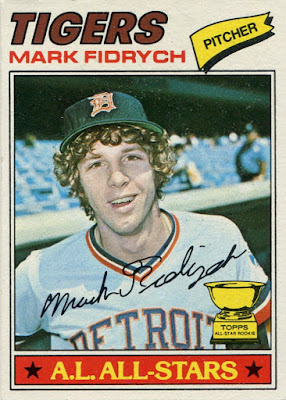 A large part of my upbringing was hearing my dad's stories about his card-collecting youth.

Perhaps the first of those stories might've been my dad's idolization of the man they called The Bird. With his goofy hair, goofy antics, and goofy personality, Mark Fidrych really wasn't far off from the way my dad and his friends acted during their pickup games at the local sandlot.

Though I never actually saw him pitch, I've come to admire Fidrych through my dad's stories, and this has been one of the most defining pieces of my collection for many years now.

When I see this card, all is right with the world. 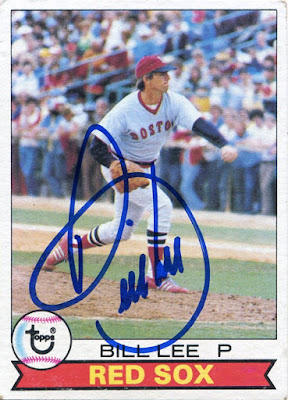 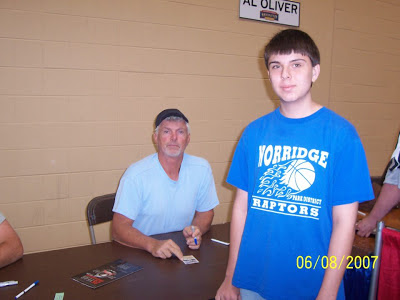 This card comes with a photographic supplement.

There's the freshman-in-high-school version of yours truly with the Spaceman himself at a local card show.

Though I also met Al Oliver -- another of my favorite '70s ballplayers -- that same afternoon, my memory of meeting with Bill Lee has stuck out a lot more over the years.

After Lee signed my copy of his 1979 Topps card, my dad asked him if he would've defaced a Graig Nettles card if I would've brought one up to him, since the two were involved in a nasty brawl that destroyed Lee's pitching arm.

True to form, The Spaceman calmly laughed and pulled out his wallet, which contained a heavily creased and beaten copy of Nettles's 1971 Topps card.

Turns out Bill Lee was playing "Wallet Card" before any of us were. 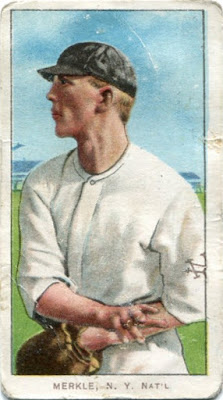 For a while, I was considering the possibility of not having a tobacco card in my best binder page.

Then I came to my senses and said WHAT ARE YOU, CRAZY??? OF COURSE YOU NEED A TOBACCO CARD IN YOUR BEST BINDER PAGE!!!!

This is the newest addition of anything in this page, as it was a Christmas gift from my dad last year. It had long been a pipe dream of mine to own a real Fred Merkle card, since I've always found his sad tale to be one of the most fascinating in the history of baseball.

On top of that, though, I find it incredible that I own a baseball card that's over a century old. A card that hit the streets before the first World War. A card that was produced nearly twenty years before my grandmother was born.

The list goes on and on...and that's why I needed a tobacco card in this page. 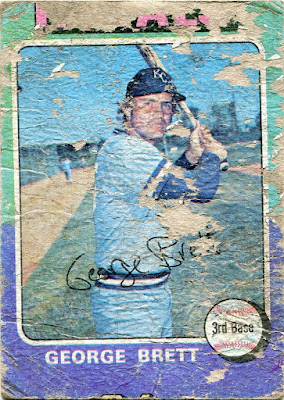 I grappled and grappled with what should occupy the final slot in my best binder page.

In the end, I couldn't come up with a card that had a better case than this one, which I found in a fifty-cent bin at a card show I attended the month before I launched this blog.

I take great pride in the backstories concerning the other cards in this post, but the sheer fact that I will never know the backstory of this "washer-used" Brett earned it a spot in my best binder page.

Who originally owned it? How did it end up in such miserable condition? Who saved it? Or, perhaps the better question, why did someone save it? Lastly, how in the heck did it end up at a card show in suburban Illinois almost forty years later?

I've always gotten a huge kick out of the fact that, as if the washer-used condition wasn't bad enough, this card is also badly miscut.

It's such a perfect fit for my kooky collection that it almost seems unreal.

So there you have it. My best binder page. Now, if you ever see me in the street and decide to ask me Nick, what cards would you take with you if you knew you were going to be stranded on a desert island for the rest of your life?...you'll have your answer.

But, seriously, send food and water first.
Posted by Nick at 7:03 PM

Personally, if I'm going to be stranded on a desert island, I'm asking for a boat to follow me, rescue me, and bring me back to the real world.

I love the Bill Lee story -- that's just a great laugh too.

So many great cards.. C'mon Nick you can have your white whale "Starting at as low as $42 for 24 months!"

That is a pretty darn good page; I'm especially fond of the Merkle and Banks cards. It's funny how much sentimentality we attach to pieces of cardboard, isn't it?

What a selection of cards - Mantle Banks Clemente The Bird - Merkle? You have an incredibly well-rounded collection, all in the same binder page!

That's a great binder page! I love how you found that Mantle, the stuff collecting dreams are made of!

A lot of history and stories in that page. Nice selections!

Congrats on the semester ending! That was always a good feeling. Some great choices for the cards. That Brett looks to have some interesting stories.

I had forgotten that your washing machine George Brett card was so miscut.

"The Spaceman calmly laughed and pulled out his wallet, which contained a heavily creased and beaten copy of Nettles's 1971 Topps card."

I think that is the greatest sentence I have ever read. I remember a few years back ESPN (I think) ran a special with Lee taking a bunch of minor league players (I think) on a baseball tour of Cuba. Anyway - hearing Lee just talk about baseball and his stories of the game really set the stage of his love of baseball.

Fantastic binder page Nick! That Merkle is a thing of beauty and the stories you shared about each card were great.

Glad to get a mention!

And remember what Bill Lee said after he pulled out that card?..."that's so he can kiss my ass for all eternity!"

Great stuff, Nick! Thanks for sharing.

On helluva page. Played in a charity softball game with Lee once. He hung out after the drank a few beers with the guys and told story after story.

Wow, great page! Mr. Cub is a true gem. The Merkle is out of this world, too. Aw hell, they're all great!

I've been excited to see what you went with, and you don't disappoint!

I, too, have a Merkle card, but it's about his boner.

That Mr. Cub card alwaystud reminds me of the profile portraits on coins. Fitting tribute to Ernie.

Great post. My binder page would also have the 75 Brett. I'd keep that card no matter what happened to it. Also like the Lee story :-)