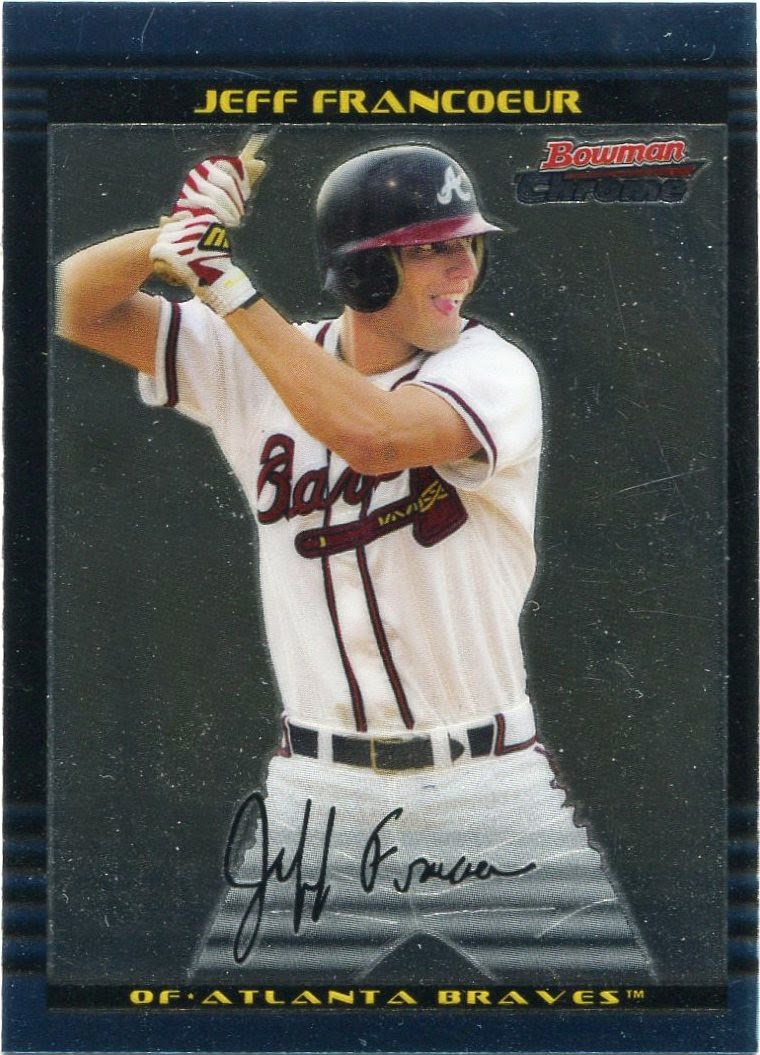 In Part 1 of this mini-series, I went through all my dime box finds from Sunday's flea market excursion.

Tonight, we'll be taking a look through the more high-end pickups of the day. I'm talking quarter, fifty-cent, and, yes, even dollar box material. The biggies. The budget busters.

Some weeks, I limit myself to my main vendor's dime boxes without even taking a peek through anything else. I almost did that on Sunday. In hindsight, it's a good thing I didn't. Otherwise, I would've missed out on my finds of the year and perhaps the finds of my entire flea market career.

But more on that later.

For now, we'll start out with the quarter bins. Of the 44 quarter cards I snagged, this Jeff Francoeur rookie may have been the most fascinating. I have vivid memories of his stuff going through the roof when he was looked like an up-and-coming star for the Braves around 2007 or so.

In 2014, he was an outfielder-pitcher for the Padres' Triple-A affiliate. He hit a paltry .083 in a brief ten-game call-up with the big club in September. Oh, how the mighty have fallen.

Most of you probably know how I feel about book value by now, but that doesn't mean it can't be good for a laugh every now and then. My big, hopelessly outdated Beckett book o' cards was published in 2008, right near the heart of Francoeur-mania.

Not only is this card the header for the 2002 Bowman Chrome section, but it's listed with a book value of forty dollars.

Now it's quarter box fodder in a discount bin near you. 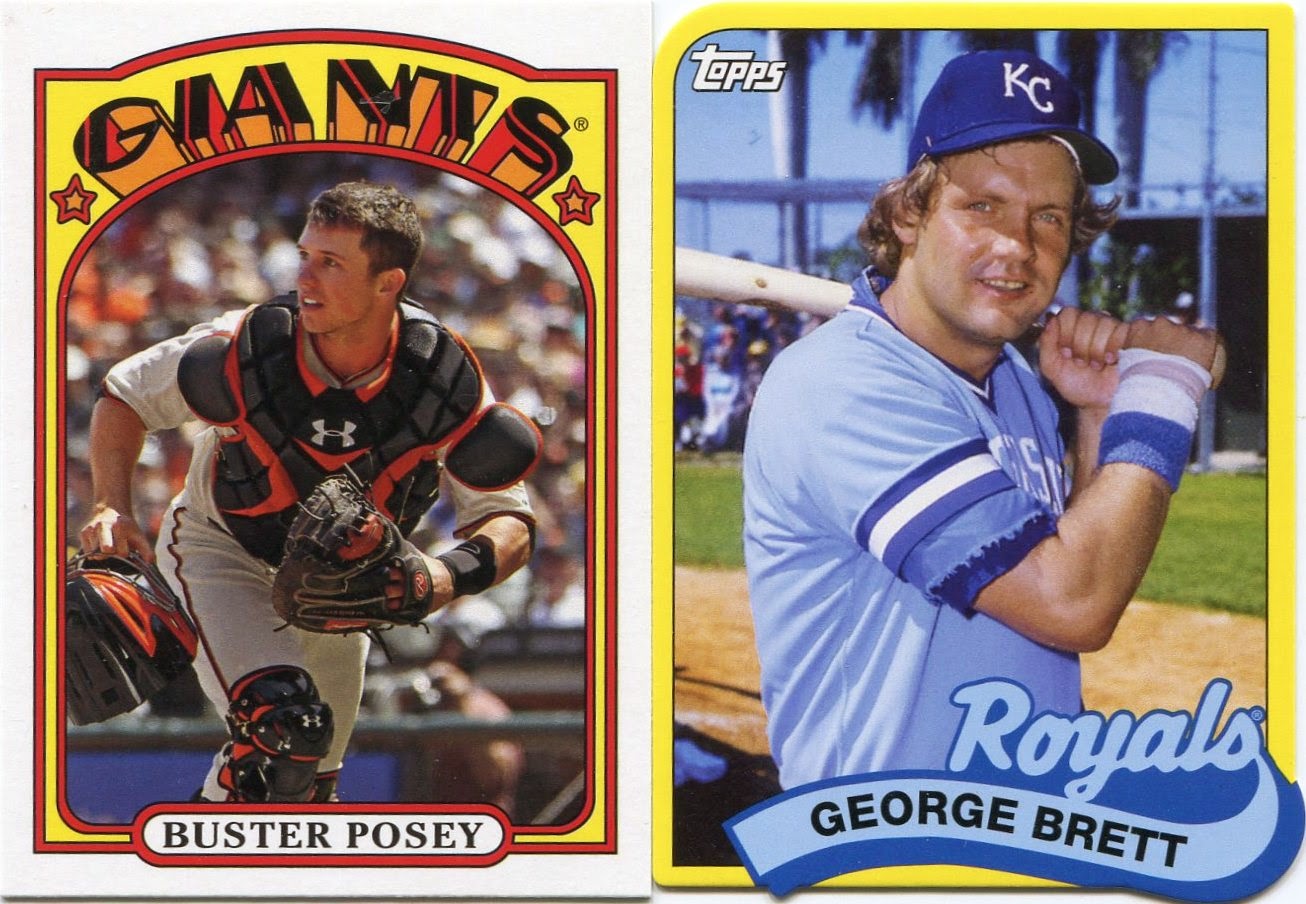 These two quarter minis feature a pair of teams still alive in this year's playoffs.

I can't say I care much about the Cards-Giants matchup, but I'll definitely be doing my best to watch every minute of the O's-Royals series.

Although Kansas City knocked out both my preseason pick to win the World Series (A's) and my runner-up (Dodgers), I don't harbor any ill will towards the Royals.

That said, I'm picking the O's to go all the way.

Although I wouldn't be surprised at all if the Royals prove me wrong once again. 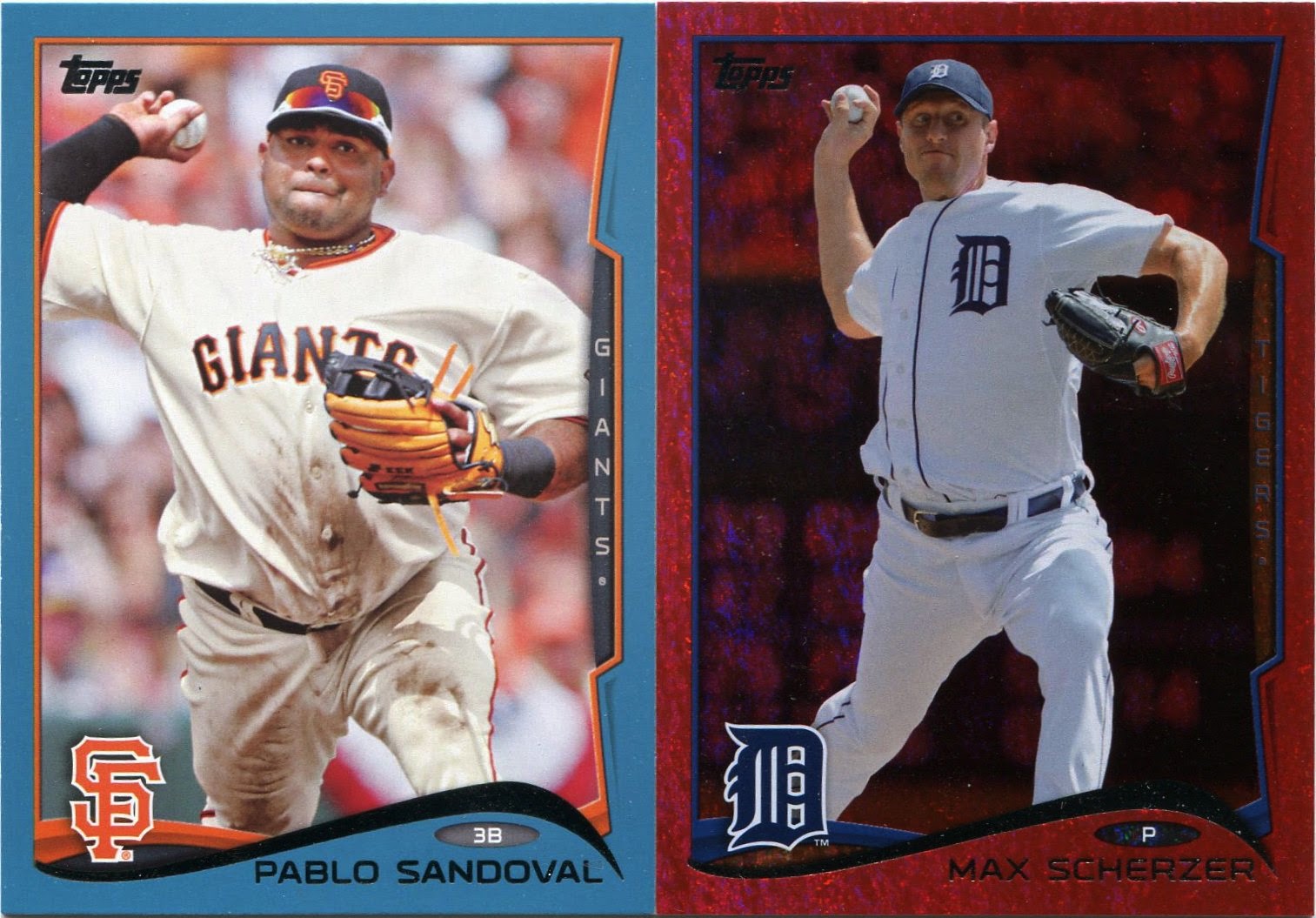 I swear this quarter bin postseason-mania is just a coincidence.

I'm not a frontrunner. 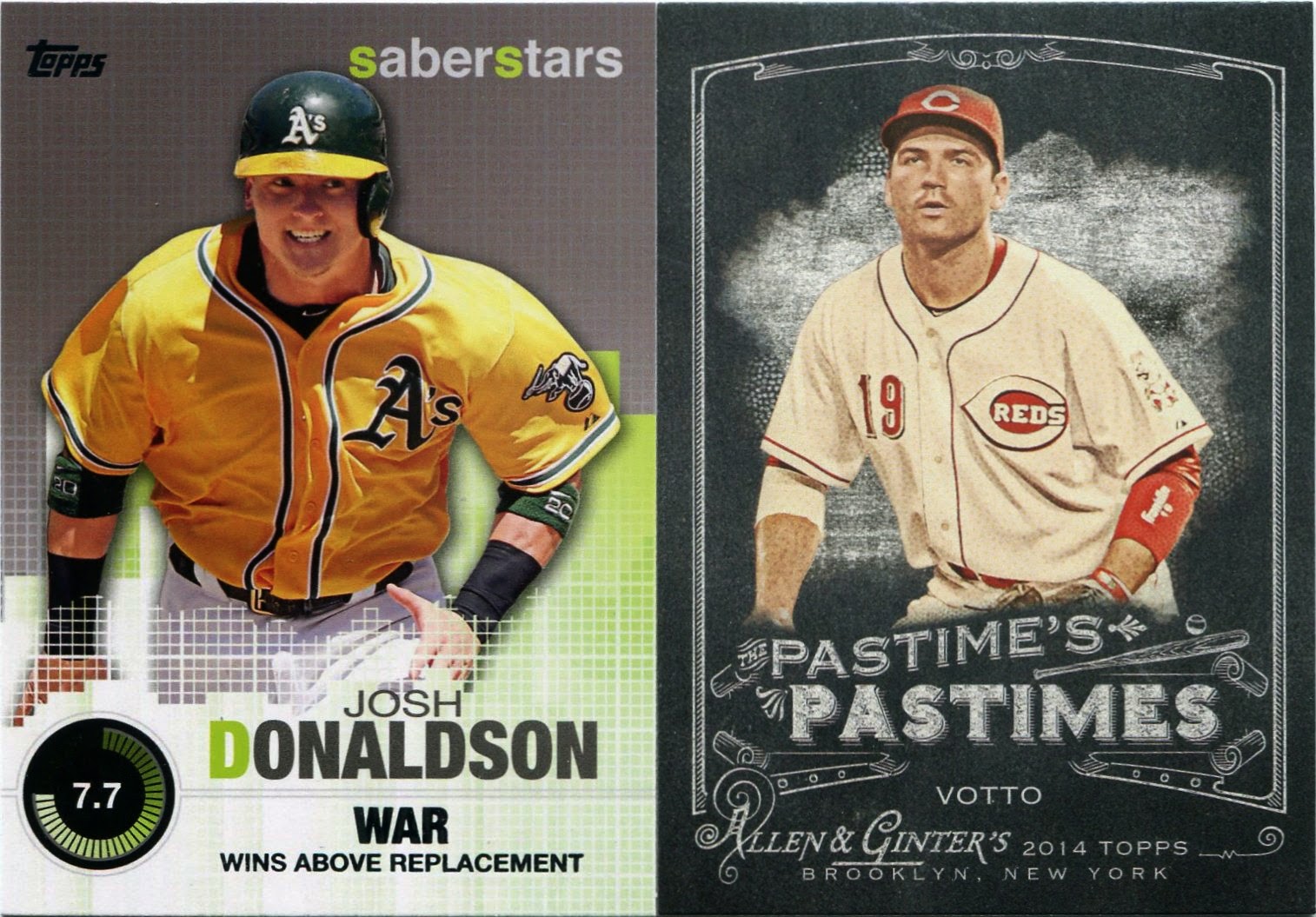 A&G's "Pastime's Pastimes" is definitely a nice-looking set, but I wonder if Topps didn't overdo the whole "hobby" idea. The back of that Votto lists his pastime as Family Man. 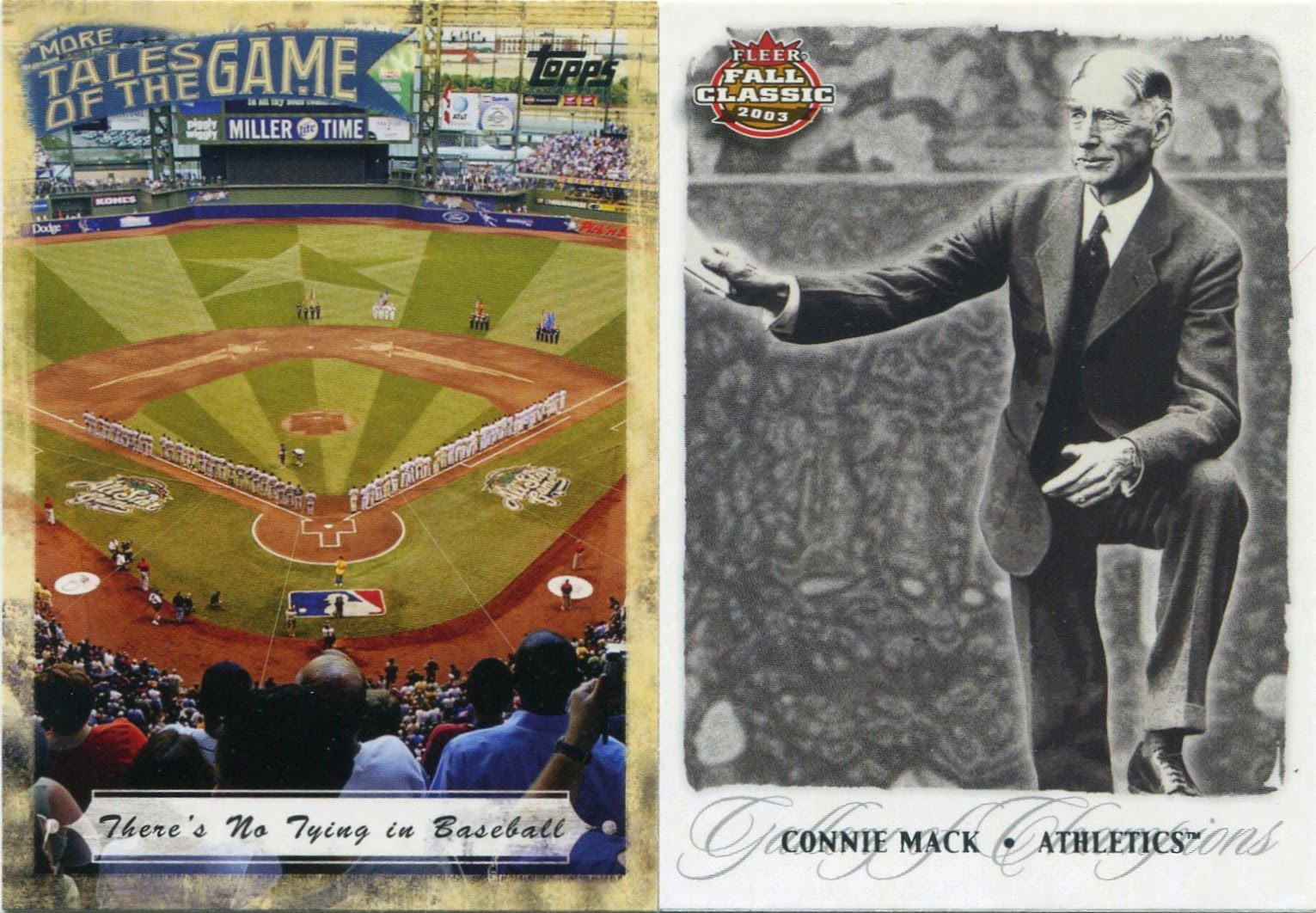 The card on the left honors (is that the right word?) the 7-7 tie in the 2002 All-Star Game. Still one of the most aggravating single moments in my history of watching baseball. Even the word tie makes me shudder.

Managers should go back to wearing suits and ties on the bench.

That's a quote from my dad after he caught a glimpse of that Connie Mack while helping me sift through the day's finds. 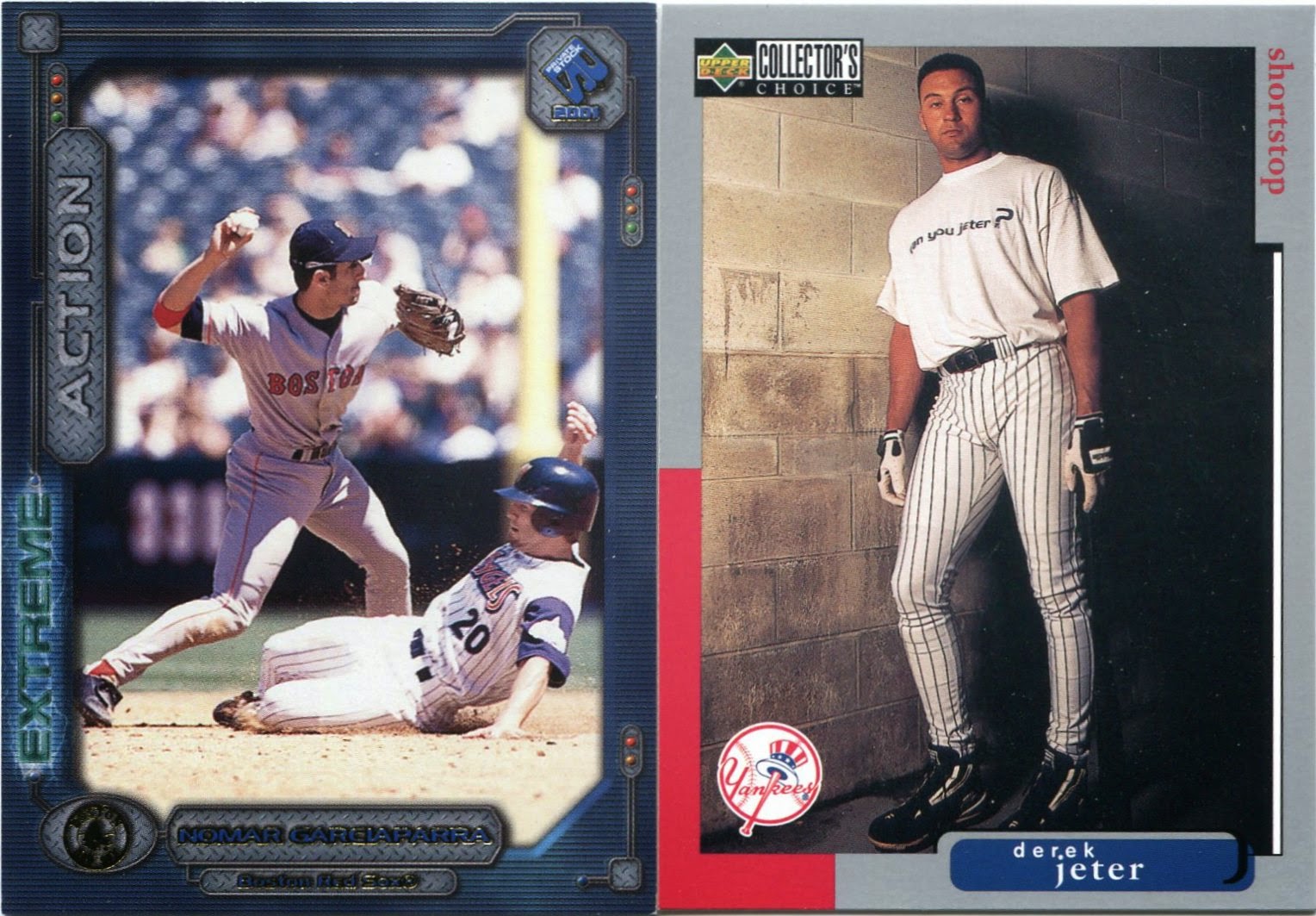 Though I can't say I have much of an opinion on either team, the famed Red Sox-Yankees rivalry was a big part of my childhood growing up.

Both Nomar and Jeter were outstanding ballplayers that each just so happened to play shortstop for the clashing clubs. I picked each of these up for the pictures alone. The Nomar for the double dip, and the Jeter for the t-shirt. 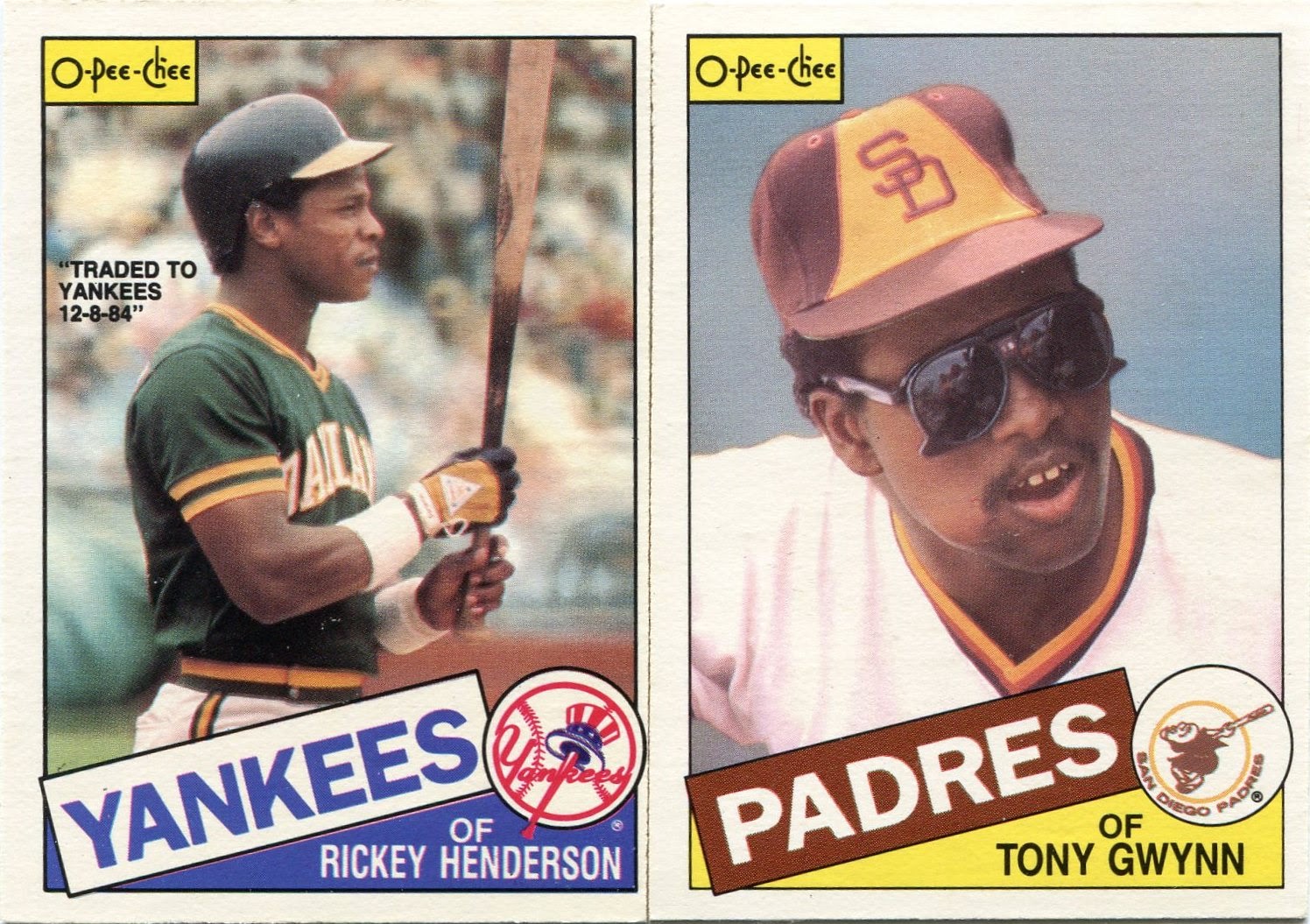 I think we already established that everyone loves O-Pee-Chee in my first flea market post.

Here's a couple more to quench my OPC thirst. The Gwynn is arguably my favorite card from the '85 checklist, so I was ecstatic to add that one to my collection.

No matter how hard you try, it's impossible to go wrong with O-Pee-Chee. 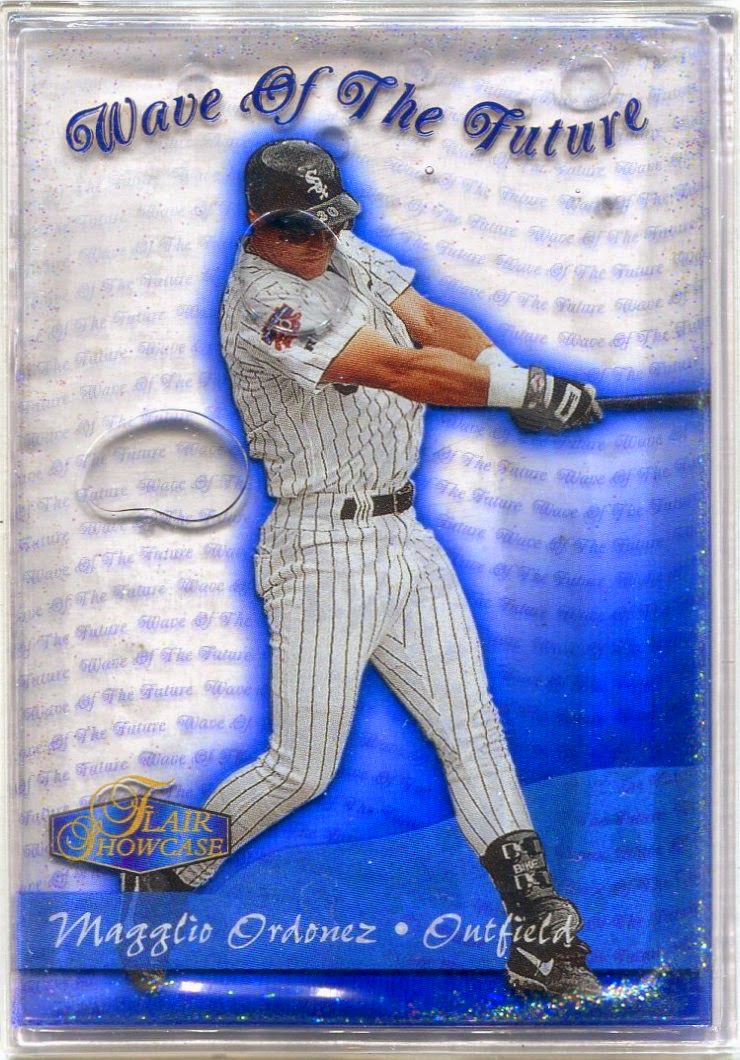 I'm not one to tell people how to collect, but everyone should at least hold one of these in their hands at some point.

Rather than just featuring a generic water-logged background on their 1998 "Wave of the Future" insert set, Flair Showcase went the extra mile and put water (actually vegetable oil) inside the cards to drive the point home.

These things are relatively thick and gooey to the touch. I feel like a four-year-old kid oohing and aahing when I roll my fingers over the front, watching the little bubbles going back and forth.

Definitely a steal for a shiny Washington, and perhaps the best quarter find of the afternoon. 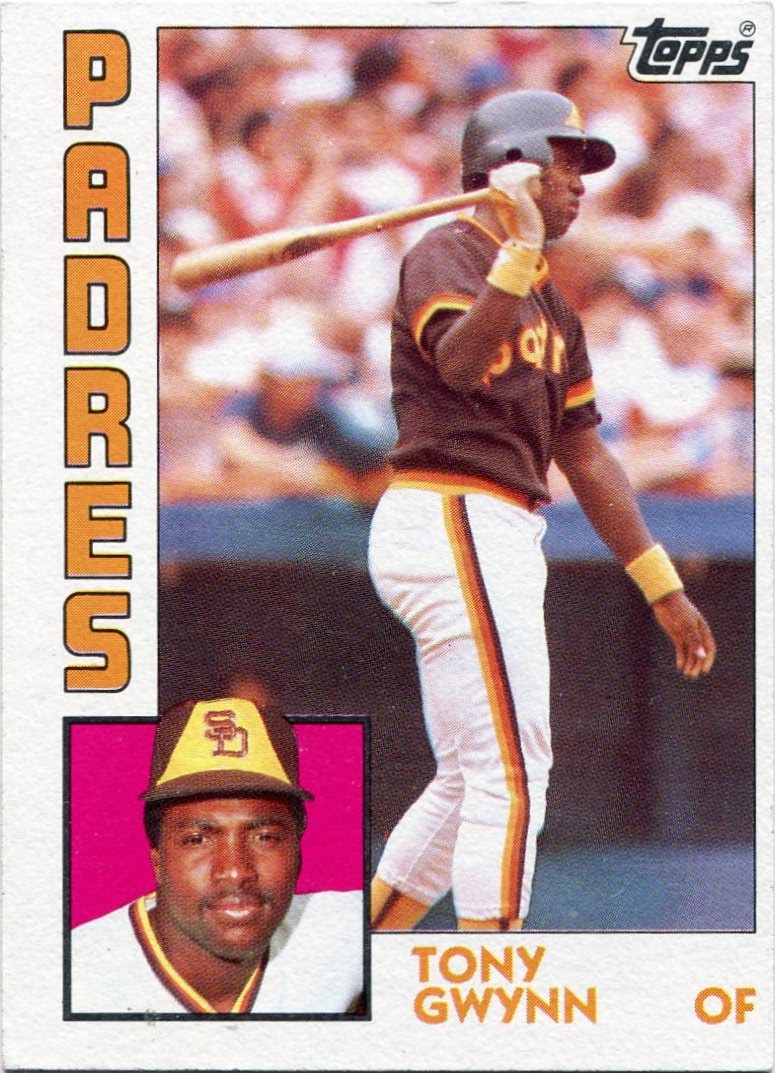 The higher the prices go, the more conservative I get.

I choose cards willy-nilly when it comes to dime boxes because they don't add up as much. I have to be a little more selective when it comes to quarter bins, but there's still a lot of room to work with.

It starts to get serious with the fifty-centers. I better have a real good reason for wanting the card, or else it goes back in the box. Only a dozen from the fifty-cent bin made the cut on Sunday.

Was this '84 Topps second-year Tony Gwynn worth the fifty-cent price tag? You better believe it. Especially after I found his '84 Fleer and Donruss issues during my last flea market run.

Now, if only I could find one of Gwynn's rookie cards on the cheap. 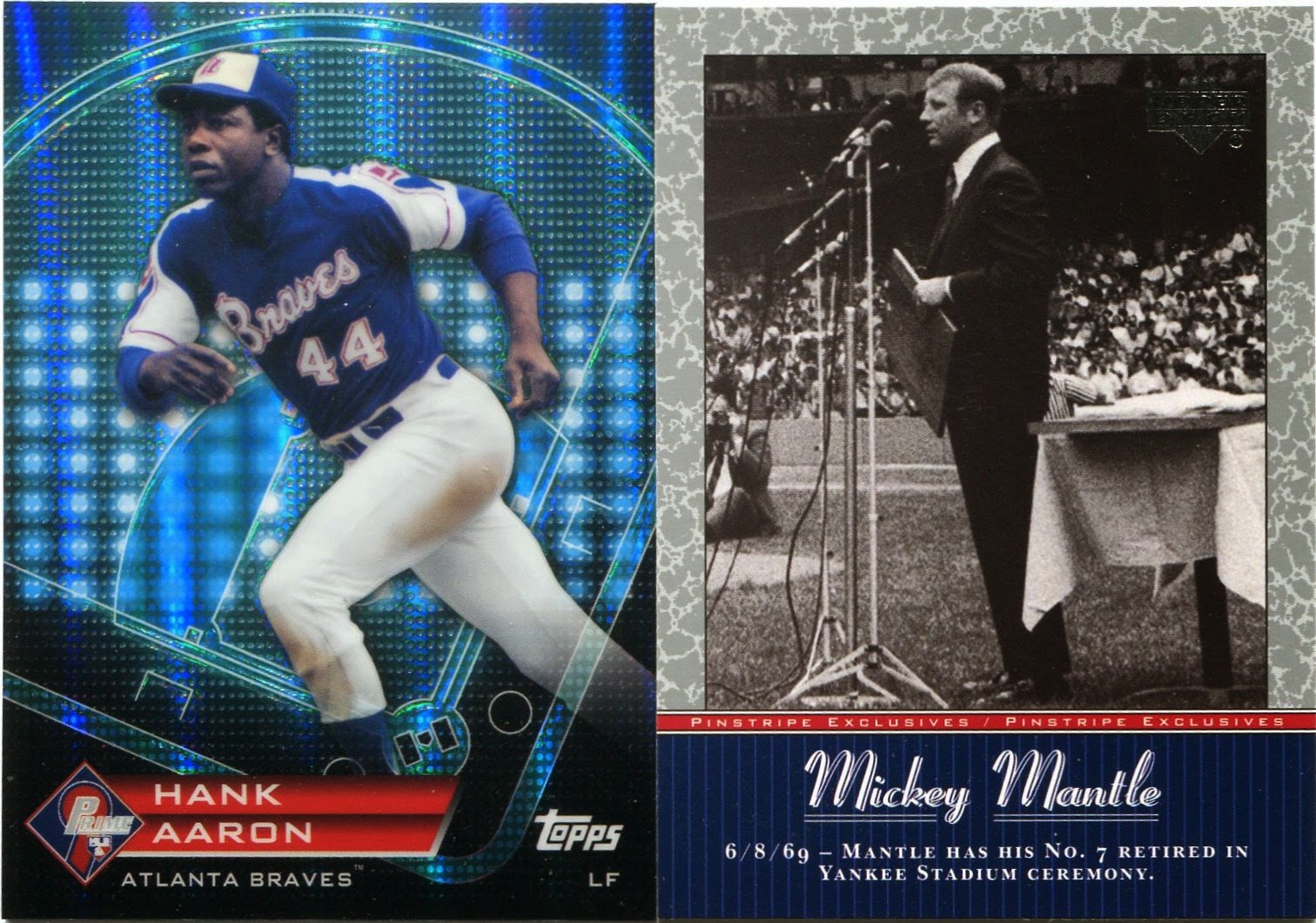 I'll definitely shell out a pair of quarters for nifty inserts of "Hammerin' Hank" and "The Mick".

Those "Prime 9" cards were part of another hobby-shop exclusive set back in 2011, which, of course, means I didn't see them until last year. 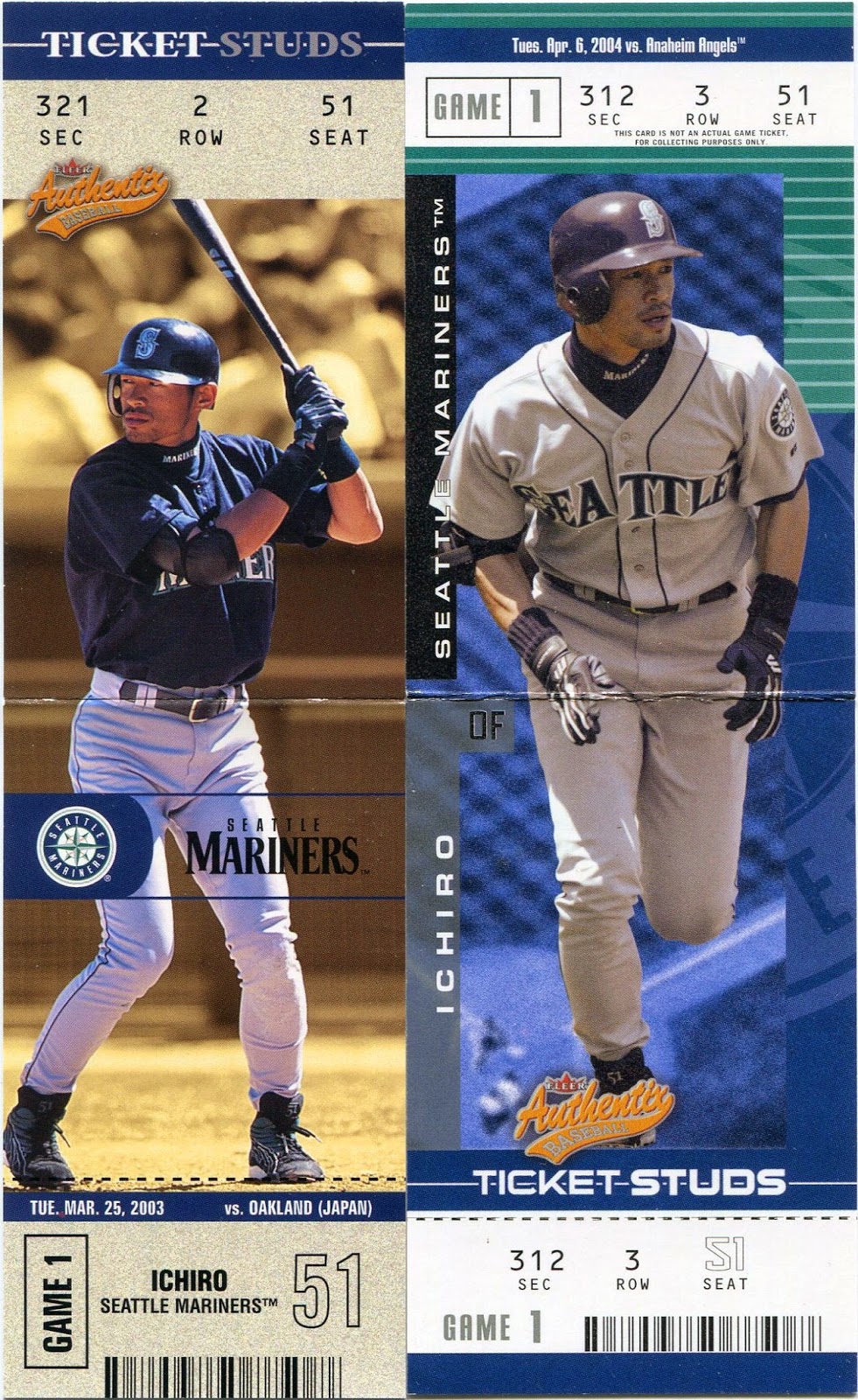 I'll have to fold these in half to store them in my binder, but I felt I should show the full picture for the blog.

Coming from the aptly-named Fleer Authentix brand, these two Ichiro inserts are obviously meant to look like actual tickets.

If this set were to be released in 2014, they'd come in the form of big, boring, white pieces of paper folded six times with a giant StubHub logo on the front.

I know I'm a little late to the party, but I'm starting to make a concerted effort to pick up more Jeters here and there.

The guy is one of my dad's favorite players, and, despite the predictable overhyping of his retirement this year, "Jeets" is still an all-time Yankee great and a future Hall of Famer.

Whether they come from dime, quarter, or, as in the case of these three, fifty-cent boxes, I figure it couldn't hurt to snag a couple more cards of his every now and then.

Especially ones as awe-inspiring as these. 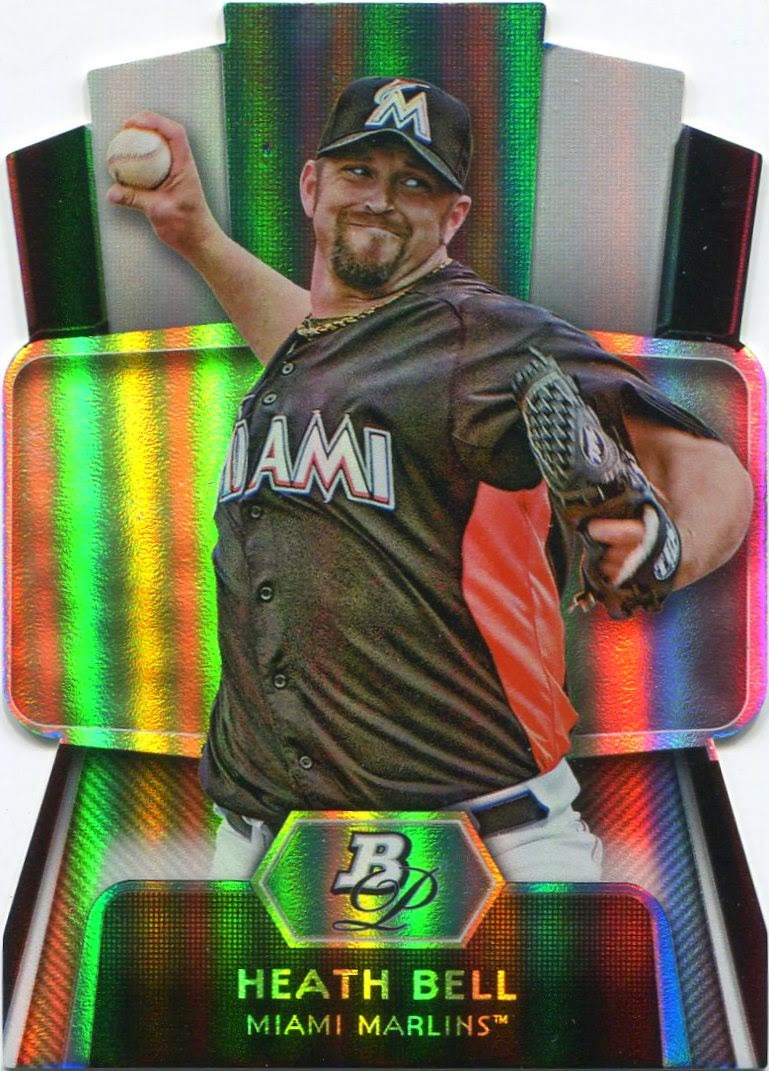 Now we're getting into the big money.

I only picked out four dollar cards from the guy's selection, but I tried to make them count. As I alluded to earlier, two of them are probably my finds of the year and perhaps the best I've ever scored in my years of attending the flea market.

But the other two weren't anything to sneeze at, either. I've seen this Heath Bell card in this vendor's dollar box all summer. I passed it up each time, thinking Eh, it's not worth a buck.

I don't know what made me finally pull the trigger on Sunday. Maybe it's the fact that this might well be my last flea market trip of the year. Maybe the shininess got to me. Or maybe plain old reason won me over.

I'm a Heath Bell fan. This insert is nothing short of crazy. And, yes, the shiny factor does help its case.

It took a good five or six months, Heath Bell, but you're finally going to a good home. 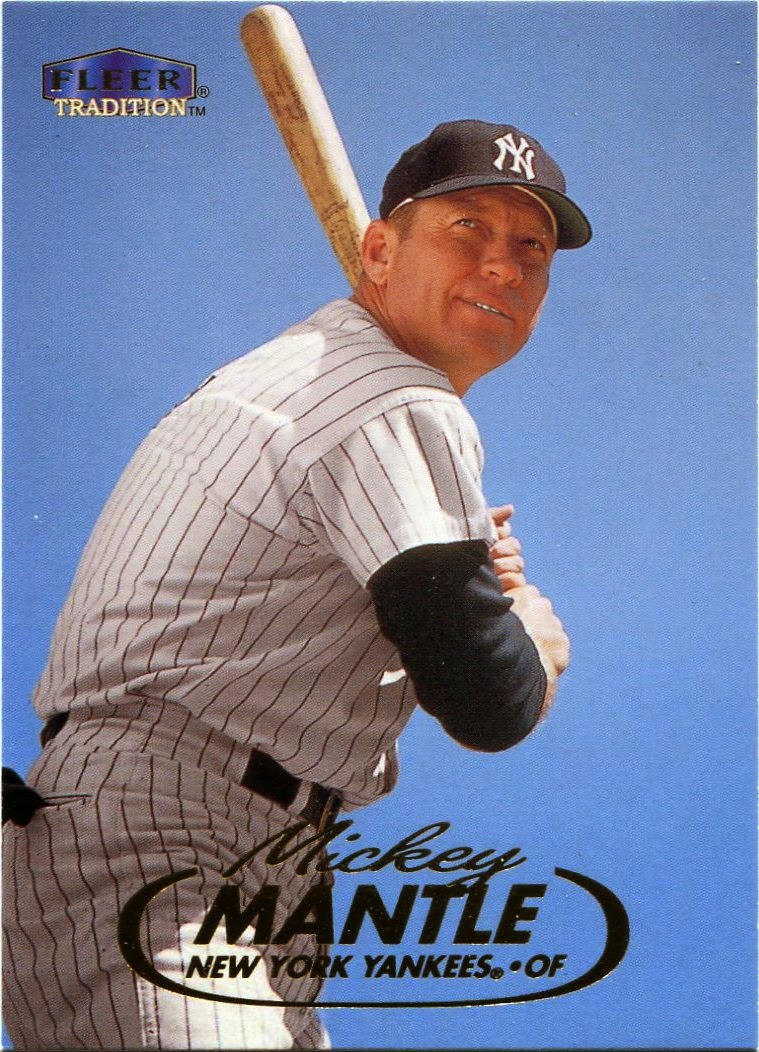 With the way Topps watered down the Mantle market in the late 2000's, it's refreshing to see a flat-out stunning card of "The Mick".

This one, complete with the back-to-basics 1998 Fleer Tradition design, is nothing short of legendary. Only after I got home later that afternoon did I notice that it was numbered "NC-1" on the back.

Apparently, this was given out at the 1998 National Convention held in, you guessed it, Chicago. This flea market is located about ten minutes away from where the National is held when it comes to the Windy City.

So, to sum things up, it took sixteen years for this card to travel about a mile. After Sunday, it made another two-to-three mile trek into my binders. This time, for good.

Now comes the moment I've been waiting for. The big reveal.

I've alluded to a couple huge dollar box finds at various points in this post. I have wanted these two cards for virtually my entire collecting life. I always assumed I'd have to fork over at least five, maybe ten bucks a pop for each. If I could track them down at all, that is.

Yet, to my utter shock and amazement, they fell out of a flea market dollar box on Sunday.

No, they're not vintage. They're not some super-duper short-printed gimmick or anything like that, either. In fact, neither of them really even fit into any of my player collections. Anyone? Anyone? 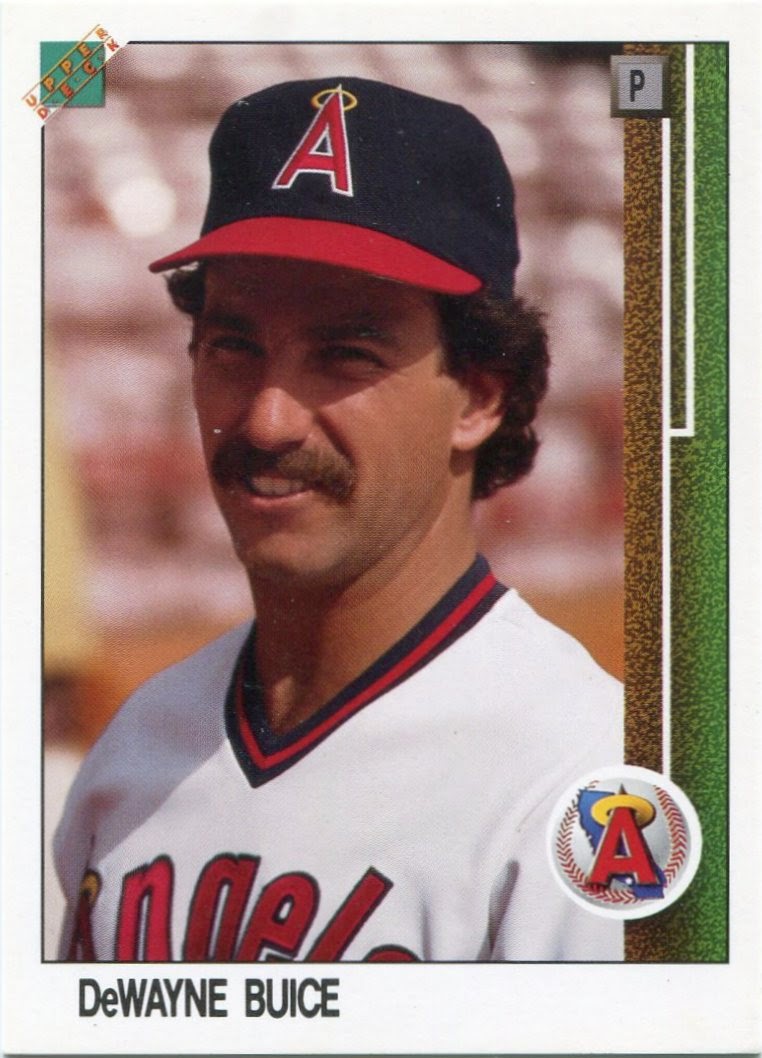 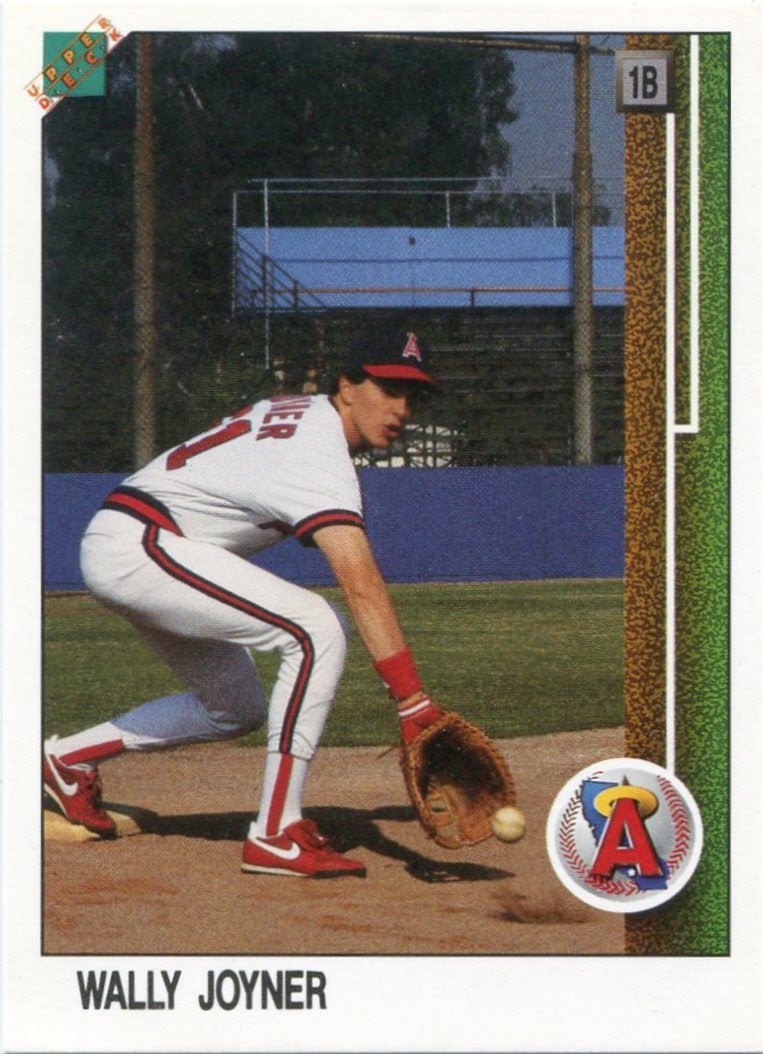 These, as you might already know, are the two promo cards Upper Deck released in 1988 before taking the hobby by storm.

Still in its primitive stages at the time (although not much different than the design that would wind up on their inaugural product), UD distributed these to collectors at the '88 National. I've read that only 25,000 of each were printed, and I bet not all of those have survived to make it to 2014.

Wally Joyner would still be a fairly well-known name even without this historic promo, but I doubt anyone would remember DeWayne Buice had it not been for his early involvement with Upper Deck.

The middling reliever spent two mediocre years with the Angels in the late '80s before calling it a career after seven games with the Blue Jays in 1989.

Still, who knows how much the fate of the baseball card would've changed had he not accidentally walked into a card shop called "The Upper Deck" while in search of a Chinese restaurant in 1987. (True story.)

Buice and the owner ended up becoming good friends, and the pitcher helped advance the shop's silly little idea of producing a baseball card set.

The former Angel was given a stake in UD's stock (for which he earned $2.8 million), but sued for back payment and eventually won a $17 million settlement from the company. This compared to the $212,500 Buice made during his three-year MLB career.

All because the guy got lost on his way to a Chinese restaurant.

With a story like that, how could I not want these two cards? This pair of innocent little pieces of high-gloss cardboard forever changed the scope of the baseball card industry.

As I've already mentioned, they're probably my two best finds of 2014 and perhaps the best from my five-plus years of attending the flea market.

Sure was a great day!...glad we could spend it together!

A very good day indeed. I must say, I laughed out loud at your little commentary about tickets. I've gone on this rant multiple times; the character of the item is completely eroded.

blew me away with that old BV on Francoeur, I too LOLd with the Ticket comment, and enjoyed the Buice story, I hadn't heard that before. Thanks!

I recently picked up my first Wave of the Future liquid card and I was pumped. By the way... awesome Gywnns. And the two UD promos are even awesomer.

Great story behind Upper Deck ! I kinew about the hobby shop, but didn't know how instrumental that player was. And now, I NEED one of those Flair inserts.

So true about ticket stubs! And a very interesting story about UD origins. I never knew of the existence of those promo cards.