Covering the Bases, Pt. 10: The inaugurals 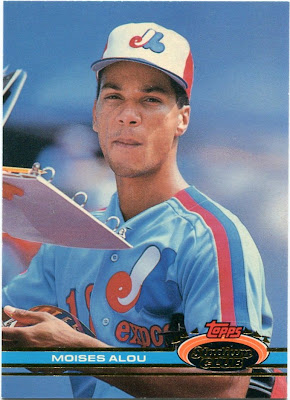 I've always had an obsession with firsts.

I couldn't tell you exactly why, though. It's just another niche in my endless quest for useless trivia. All I know is that if it's a first, I'm interested.

Firsts are especially fascinating when it comes to baseball. Off the top of my head, I can tell you who hit the first homer in National League history (Ross Barnes), who pitched the first known perfect game (J. Lee Richmond), and who the first catcher to sport shinguards was (Roger Bresnahan).

See, little things like that are what drive my thirst for baseball knowledge.

Cardboard also has its fair share of great first as well, obviously.

One of my favorite things to do is go back and look at the very first designs for some of the hobby's most prominent card companies.

They're almost like "pilot episodes" for baseball cards. Most of the time, it's only a faint glimmer of what that particular brand would go on to become. But, in hindsight, you can spot clues of its future greatness. (Much like the Seinfeld pilot, I must say.)

In tonight's "Covering the Bases" topic, I'll be ranking the inaugural designs for nine major brands.

I've also decided to leave out pre-war sets like Goudey, T206, and Play Ball, because...well, I don't have any cards from most of those inaugural releases.

For now, we start at #9 with a rather two-faced brand of baseball cards. 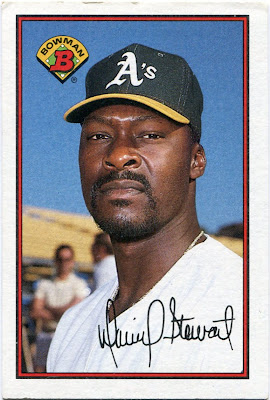 Yes, I know Bowman got its start way back in the late '40s.

However, I've decided to nominate the set's grand return in 1989 as their unofficial inaugural release for a couple reasons.

Like a lot of other older sets, I simply don't own any cards from Bowman's first official release in 1948. (Although I hope to one day.)

Plus, I think the 1989 release served as the basis for the Bowman we know today. Rookie-based, mostly boring photos, stuff like that.

I've gone on record saying that the ugly, oversized '89 Bowman checklist is my least favorite set of all-time. While it's starting to get some competition from 1990 Donruss, it's still right at the bottom of the barrel. 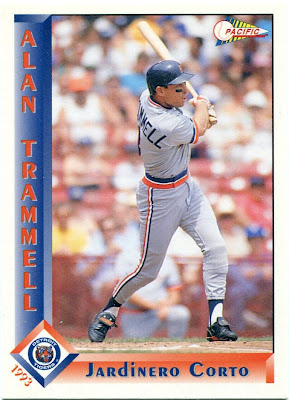 Again, there's a bit of a question as to when the Pacific brand really started.

Officially, they put out quite a few stellar "Legends" and Senior League sets throughout the '80s and early '90s.

For this post, though, I've decided to go with their first foray into the current game of baseball in 1993. The Spanish-based checklist isn't widely remembered these days. (None of Pacific's efforts are, really.)

I'll admit, I almost forgot about the little old Pacific brand while prepping for this post. And even after I remembered it, I didn't think I had anything from their first official release in '93.

Luckily, Alan Trammell swooped in to save the day.

Cards from Pacific's inaugural set in '93 are usually tough finds. Even so, they're not all that exciting. Not awful, but not overly flashy.

I guess it's not surprising that '93 Pacific is all but forgotten these days. 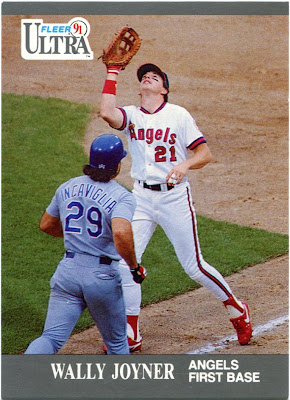 This is the one semi-offshoot set I decided to include in this list.

From its start in 1991 to its demise in the mid 2000's, the Ultra brand was run by Fleer. Because it lasted so long by doing its own thing, though, I've come to think of it as an entirely separate set. It's not Fleer Ultra to me.

The brand's first set in '91 is another one of those under-the-radar releases from the overproduction era.

Ultra's inaugural effort has a few flashes of greatness, but they're relatively few and far between. The Joyner is near the top as far as photography goes. (As is this one, I might add.)

I could be wrong on this, but I'm pretty sure Ultra was regarded as a semi-high-end set back in the day.

With a name like that, you kind of have to be. 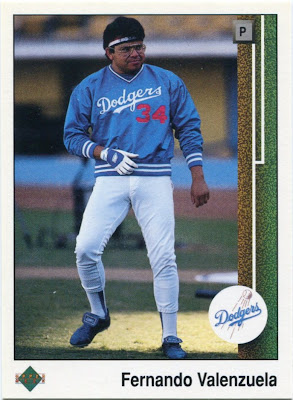 I already said most of what I have to say about '89 Upper Deck in yesterday's post, so I'll keep it brief here.

While many of UD's future hallmarks were present in their first high-end release in '89, I think it was one of the more average efforts in their two-decade history. Not surprisingly, it ranks right near the middle on this list.

I'm still not sure what possessed the folks at Upper Deck to use this rather unsightly shot of Mr. Valenzuela, though.

The one on the back would've been so much better. 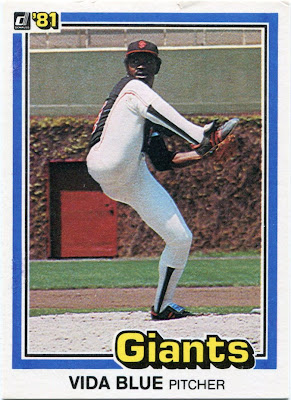 Famously, Donurss was one of two card companies to enter the hobby in 1981.

After nearly three decades of pretty much having the hobby all to themselves, Topps finally received a bit of legitimate competition. It's the main reason I mark '81 as the beginning of the "modern era" for cardboard.

From what I've read, the people at Fleer and Donruss didn't have a whole lot of time to prep for their first releases in 1981. Considering that, the inaugural design for Donruss was a pretty darn good one.

Rushed photos are a big drawback from the time crunch they had to work around, as out-of-focus and just generally subpar shots are common within their first checklist.

However, I still rank the inaugural design as one of the best in Donruss history. I'm an avid supporter of color-coded borders. And between the team name, player name, and position, the fronts tell you everything you need to know without being intrusive.

And, hey, there are a few hidden gems in this checklist as far as photography is concerned. 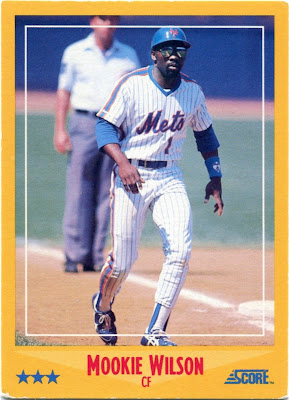 Score's first set might've been their best one.

I know other collectors might not be huge fans of the concept, but I applaud the different colored borders that Score used in their early years. If I were a set builder, I'd imagine any late '80s/early '90s Score cards would look great together in a binder.

Plus, yellow is a vastly underused color in this hobby. Save for '91 Fleer, I can't think of another set that used it so prominently. (Plus, something about yellow just fits with Mookie Wilson. I'm not quite sure why.)

The only downside I can see with '88 Score is the little white box that they shoved onto each photo. I never quite saw the point of those. They'd look a whole lot cleaner without 'em.

I say this about a lot of individual sets, but I think the Score brand as a whole never got its fair due. Considering they had to deal with cardboard giants like Topps, UD, Fleer, and Donruss during much of their decade-long run, I guess that's not much of a surprise.

To me, Score was always a force to be reckoned with. 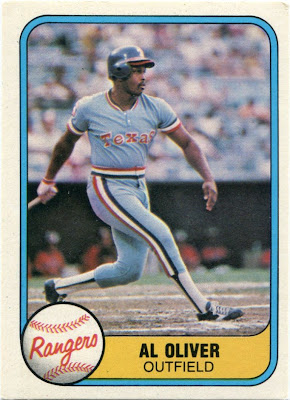 Some of my ties to '81 Fleer are emotional.

One of the first card-related purchases I can ever remember making involved a giant stack of these from a local flea market for a few bucks. Many of those, like Mr. Oliver, are still in my collection to this day.

It's a set I've known ever since my childhood.

But, taking emotions aside, '81 Fleer is still pretty darn nice. I've always been a fan of the team name baseball. And, again, color-coordinated borders are always a huge plus for me.

It was basically a dead heat between Score and Fleer for the third spot on this list.

In the end, Fleer ranked higher because of that hallowed childhood purchase. 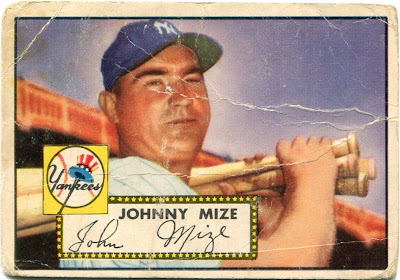 I know technically the first Topps cards were the '51 Red and Blue back sets. As famous as the '52 design might be, it wasn't actually the true beginning for Topps.

Unfortunately, I don't own anything from the '51 Topps set. I can't say it's from a lack of effort, though. Most are just out of my price range.

Besides, many collectors generally agree that 1952 was the first "official" Topps release. For the purposes of this post, that'll serve as their inaugural year.

Although it's only my fourth or fifth favorite Topps design of the '50s, the soon-to-be famous company did a nice job with their first mainstream effort.

The nameplates, team logos, and facsimile signatures were innovations that would dominate the hobby in the years to come. As did the genius idea of putting stats on the back of these '52s.

Being the first official Topps set and all, it's quite possible that the iconic '52 Topps might be a tad overrated. But that's not taking anything away from them. They're still sweet pieces of vintage goodness.

The Mize is one of just three cards I own from the groundbreaking '52 checklist.

Not a bad 21st birthday present, I'd say. 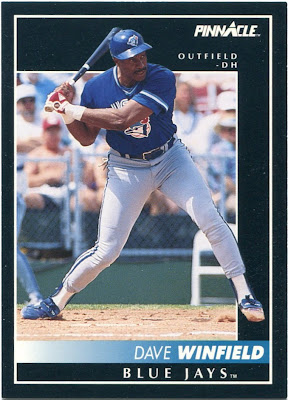 The number one set on this list came out the very year I was born.

To me, Pinnacle is still the single greatest first set we've seen to this day. And it's not even all that close.

The darkness. The (again) color-coordinated nameplate. The nifty photography. It's all there.

And I especially like how each photo seems to pop out of the frame. It makes Dave Winfield seem like a giant. (Then again, Winfield was a giant.)

The Pinnacle brand wasn't around for very long, but it managed to do a great deal of damage during its time in the hobby.

From what I've seen, Panini recently revived Pinnacle for 2013 in a very unceremonious piece of news over the last couple weeks. Sadly, I haven't been impressed with what I've seen so far.

I guess it's silly to think that the brand could ever return to what it once was.

As far as firsts go, Pinnacle is at the top of the class.
Posted by Nick at 4:52 PM

In general I agree with your list of first issues, I think that the 81 Fleer is very good for a first try and rates high on my list(which I never took the time to actually compile)best first issues.