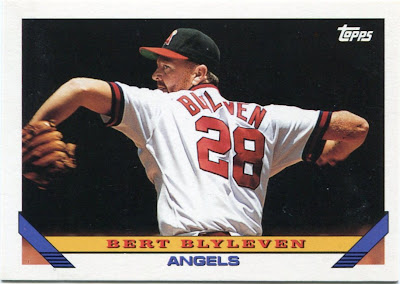 To me, it seems like much of the hobby works in ebbs and flows.

I've always believed that the "offseason" doesn't apply when it comes to baseball cards. I don't care whether the thermometer says five degrees or 90.

I'll always be dedicated to this hobby, no matter what time of year it is.

That being said, there are periods where the card market seems more laid back than others.

And I'm starting to believe it causes a lull with Listia, too.

For a while, it was all the rage around here. Judging by the "gems" I found in the months after I joined, I was certainly on board with the program.

Lately, though, I haven't been frequenting the site as much.

I've barely seen any nice little "treasures" lately. That, coupled with the increasing amount of credits needed to acquire a card, have gotten me a little bummed about the place.

I'm hoping it's just a case of "ebb-itis" at Listia.

Still, I can't say that I've been completely shut out within the last few weeks.

I did manage to pick up a nice four-card Angels lot for a mere 100 credits the other day.

Once I saw that Mr. Blyleven was a part of the package, I instantly pulled the trigger. I'd long wanted to add his '93 Topps issue to my "sunset" collection.

And, as per my rules, any "sunset" card immediately qualifies as a "gem" of the overproduction era. (Okay, I just made that "rule" up. But it's true.)

Any horizontal "sunset" card is a huge plus in my book. Plus, although I don't think it's a night card, I just can't get over how much I love the "darkness" in the backdrop.

A definite "gem" any day of the week.

Due to my intense focus on the Blyleven, though, I basically ignored the other three cards that were included in the auction.

One of them proved to be a Chili Davis card that I'd already had. Nothing too special.

The other two were quite the opposite. 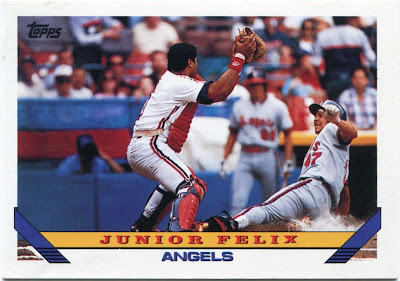 A play at the plate.

Those always make for fun cards.

Plus, the backdrop for this one appears to be from the old Cleveland Stadium. I can't help but think of Major League in this situation. 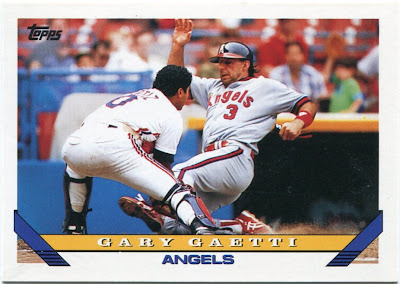 Isn't that the same stadium?

And isn't that the same Indians catcher?

And isn't that the same checkered-shirt guy in the backdrop?

Hold the phone. I think these two shots are from the same game.

Bear with me here, but I'm about to try my hand at the proverbial task of "dating" this pair of cards.

My "research" found that there was basically only one possible game where both of these photos could've been snapped.

All sources point to these two shots coming on consecutive plays during an Indians-Angels matchup on May 2, 1992.

In the top of the fourth, Gary Gaetti lined a single to left that scored Junior Felix. From the looks of it, I'd guess that Felix was indeed safe on his '93 Topps card.

The very next batter, Angels' catcher Mike Fitzgerald, whacked a single to center. Apparently, Mr. Gaetti tried to test the arm of center fielder Kenny Lofton. Not the smartest move.

Unsurprisingly, he was out at home on the play, something that looks to be the case on his 1993 Topps issue as well.

The only possible gap I could find is the striking amount of fans that seem to have left their seats in between at-bats.

But, having been to quite a few baseball games myself, I can tell you that a decent amount of the people that attend ballgames seem to have short attention spans.

On top of that, you just never know when you'll get a craving for one of those delicious ballpark franks.

Besides, this was the only game of the '92 season that could possibly fit the "plays at the plate" featured on these two cards.

That was pretty fun.

I love playing "detective" with my collection every now and then. I can't explain exactly why, but being able to pinpoint a specific moment in time within a baseball card is an awesome feeling.

Although the Blyleven still proved to be my favorite card from the package, the Felix/Gaetti combo proved to be an extra-special treat as well.

I hope to see you again once "flow" season comes around.
Posted by Nick at 1:30 PM

Pretty cool to put the history of that game together via cards. Well done!

And I'm loving that Bert up top. Wonder if that was at the same game?

The flying dutchman ! Nice one !

Hey Nick, the Junior Ortiz card photo was snapped the frame right before the Gaetti card. If I have another I'll send it your way. They look great together in a binder. Great stuff.

Here's an extra bit of trivia: All of the home games in 'Major League' were actually filmed at Milwaukee's County Stadium, then home to the Brewers, not at "The Mistake By The Lake" Municipal Stadium.

as majpasqua mentions, the junior ortiz card features the same gaetti play. i wrote about it way back in the early stages of my blog

shortly after writing about the gaetti and the felix cards

they are three of my favorite cards from the 1993 topps set - i'm glad to see them get more exposure thanks to your blog!