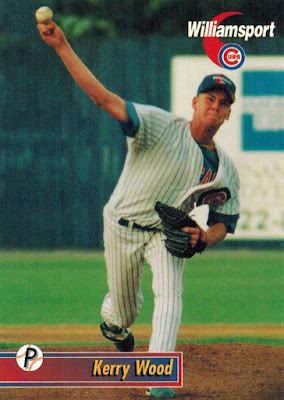 One of my lifelong dreams is to help curate a set of baseball cards.
Chances are, of course, that this will be a fantasy forever unfulfilled - even if by some wild miracle Topps actually asked collectors to help create their stuff, I feel like they'd back away slowly if I told them I wanted a set of obscure guys like Ben Weber, or maybe something involving "Lost Uniforms" with stuff like a Royals card of Orlando Cepeda. I suppose there's always customs, but I don't have the means or artistic talent for those. And besides, just making a custom of something I want has always felt a bit like cheating - the surprise is gone.
Dreams are dreams, and until those dreams come true I guess I'm stuck with every set featuring ten different Ronald Acuna Jr. cards, and barely a whiff of anything else. 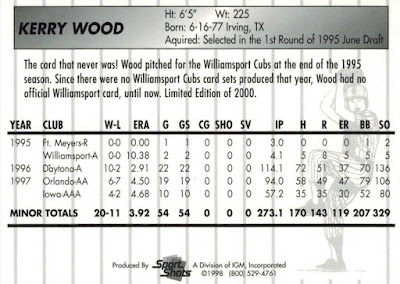 But recently I learned that, in at least one instance, a baseball card company has indeed teamed up with a fan for the sole purpose of making that fan's wish come true.
Some of you may remember the insane generosity of a reader named Alex I showcased earlier this year and I'm happy to report that generosity hasn't stopped in the interim. Among the new goods he sent was this minor league Kerry Wood, which, as Alex told me, was actually released by the Williamsport Cubs at the request of a fan who wanted to see Wood's brief time with the A-ball team documented on cardboard.
Kind of like a "post-rookie" rookie card, three years after the fact - and a card that would've never existed without the dedication of one determined fan. 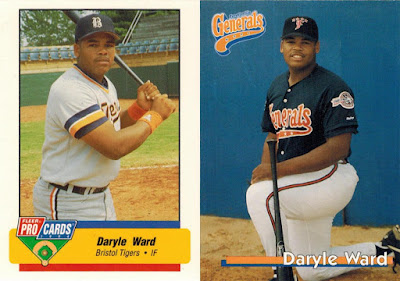 As I've mentioned before, Alex is a minor-league card aficionado, which helps me because I know (and own) very little about the gads of minor league stuff out there.
I once made an offhand comment in a post about collecting Daryle Ward, and somehow Alex remembered that and sent me my first two cards from Ward's early stint in the Tigers' system - further proof that I am forever indebted to the eagle eyes and long memories of my readers. 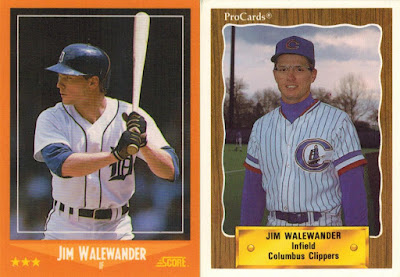 I was first introduced to Alex through our shared fandom of Jim Walewander, and with his generosity he's inflated my Walewander collection to levels I never could've dreamed of.
Alex threw a couple new Walewanders my way here - you'll have to believe me when I tell you the Score is actually a glossy parallel. Side note: a weird thing happened with the package that contained these two - it got lost in the mail for a good three months before it finally dropped on my doorstep, complete with a couple tire marks on the bottom. Even weirder is the fact that it showed up the very next day after a different package from Alex had already arrived!
Let me know when any of you figure out how the post office works. 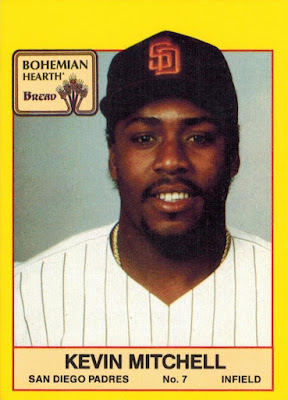 If I didn't know any better, I'd almost think that Alex has a special form of ESP that allows him to just know what cards I want.
I've been chasing this Kevin Mitchell oddball for what seems like forever - it's only the second card of him as a Padre I know of, not counting the split-screen '87 Fleer Update - and in the snap of a finger, there it was almost before I could even say thank you. 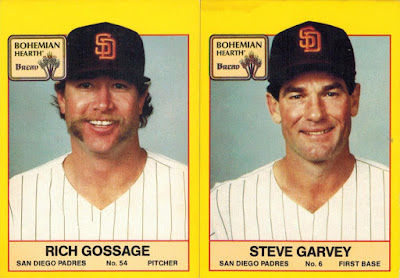 And Alex even sent along a couple other familiar names from that very same Bohemian Hearth set along for the ride! 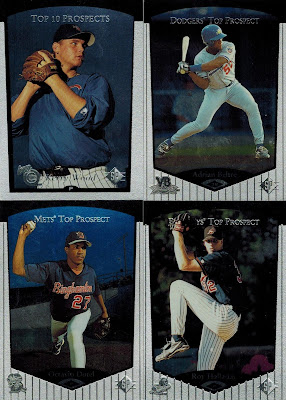 I forget what prompted it, but at one point Alex asked me if I needed any cards from the 1998 SP Top Prospects set.
So I consulted the checklist and found out that, dang, I did need quite a few of these things. I always love pre-stardom stuff of future big names, and for whatever reason this set seemed to have a copious amount of those.
My only complaint is that the names are impossible to read on the scans, so I feel like I need to elaborate here - from left to right: that's Kerry Wood, Adrian Beltre, Octavio Dotel & Roy Halladay for all of us who aren't blessed with paranormal eyesight. 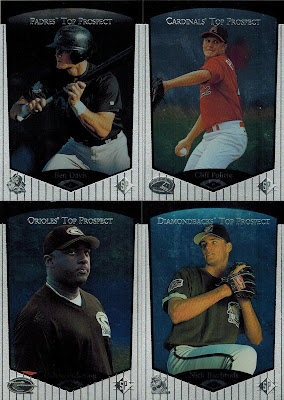 There's even a bunch of kinda obscure dudes I love that we'll never see in a set for another thousand years.
(Ben Davis, Cliff Politte, Calvin Pickering, John Patterson.) 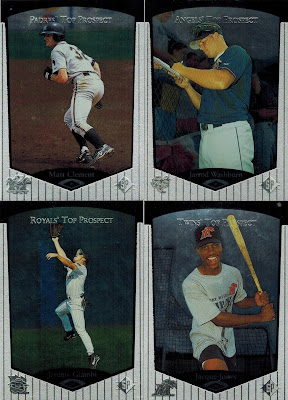 And here's a good amount of mini-collection hits and generally fun stuff, which has me wondering how this set ever managed to fly so low under my radar all these years.
(Matt Clement on the bases!, Jarrod Washburn signing autographs!, Jeremy Giambi, Jacque Jones.) 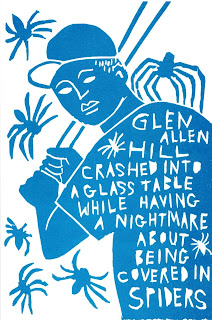 And finally the coup de grace from Alex - a trippy cartoon postcard that documents one of the weirdest injuries you're ever gonna hear about.
Apparently this comes from a "Bizarre Injuries" series made by a small art company called Left Field Cards, which talk about an idea that would go straight into any set I'd want to curate. This one makes everything comes full circle here, because Alex played a big role in helping me track down a minor league card that apparently showed Hill getting over his deathly fear - more power to him, because that's a fear I don't see myself ever conquering. This certainly isn't a card I ever thought I'd see, but one you better believe is on proud display in my room right now.
Sure, I know there's a good chance Topps'll never come knocking on my door - but if nothing else, I guess actually holding a real, actual card of a tarantula-themed injury in my two hands makes me think there's hope for us fans yet.
Posted by Nick at 5:30 PM

That Hill/spiders thing is wild... your friends are really tuned to your wavelength!

I would think Ben Davis and/or John Patterson would have a much better chance than the other two in being included in a future set. IF and only if Topps does another Rookie Cup set like in 2005. I don't that either would be included, in fact I am almost positive neither would be. Maybe a one in a million chance, but as Jim Carrey famously said, "So you're saying there's a chance." But maybe they included a full reprint set of cup cards from then the two of them could be.

Still unlikely though, although I would buy that set.

I'm so bummed that I didn't buy that Bizarre Injuries set back in the day.

When you curate that lost uniform set, please be sure to include a bartolo colon twins card and a boog Powell dodger card.

Wow, Alex is a quite a DUDE. Excellent stuff and the sort of weirdo arrivals that make trading so much fun.