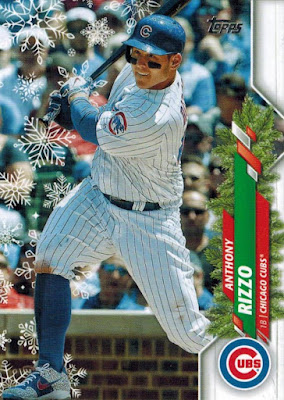 Topps Flagship, Topps Opening Day, Topps Holiday, Topps Mini, Topps UK Edition, Topps Chrome, Topps Chrome Sapphire, Topps Chrome Ben Baller, Topps Chrome Update.
That, if my counting and research is correct, is a list of nine different sets issued in 2020 that are basically variations of the same exact cards. And that list doesn't even account for the offshoots of other Topps brands (A&G Chrome, Stadium Club Chrome, etc.), nor the million different parallels included within each of those nine variant sets. This is collecting in the modern day. Overkill, to say the least.
I guess this explains one of my main complaints with today's hobby: it feels like I'm collecting doubles a lot of the time. 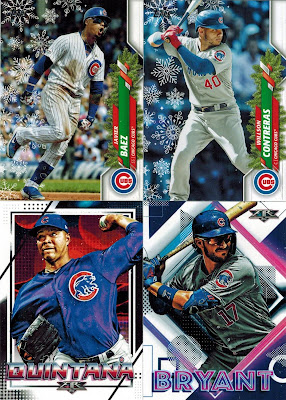 While my goal has never been to consciously collect every single card of, say, Anthony Rizzo that hits the market each year - who can keep up with nine different sets? - fact is I do welcome any and every Rizzo out there, even if it's the same card repeated with minor tweaks five or six different times.
Sure, there is a bit of Stockholm Syndrome here - I've gone on record as saying that I like how a half-dozen variants/parallels of the same card look next to one another in a binder page, and that's still true. But this is another way my collecting brain fights a war against itself: what I like and what is necessary are often two different things, so I live with the double-consciousness of both wanting and refuting such parallel sets.
I think of all this now because I recently received a couple different packages from John of the prolific "Johnny's Trading Spot" blog that included a bunch of 2020 stuff I needed, including a few things from one of those variant sets in Topps Holiday. 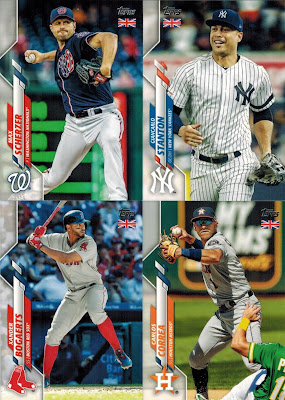 John also sent a few Topps UK variants for the binders - the little Union Jack in the corner of these isn't much of a difference, but it's enough to qualify them as "different" and thus needed for the collection. 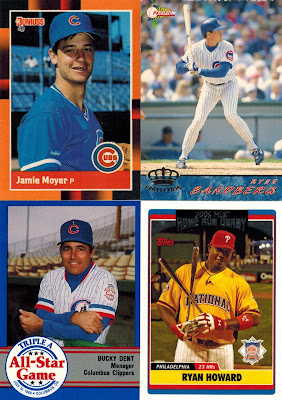 Here's a bit of non-2020 cardboard from John - I'm so used to Jamie Moyer as a grizzled 40-something veteran that seeing his early Cubs cards still kinda startles me. 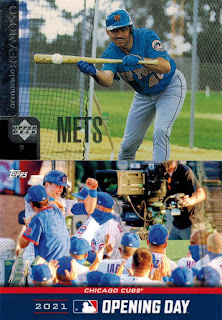 Pitcher at the plate and a 2021 Cubs insert need here.
Topps Opening Day has been around so long now that it's become an ingrained part of each card year for me - but even though I'd like to say it's more necessary than whatever that Topps Chrome Ben Baller set was, it probably isn't. 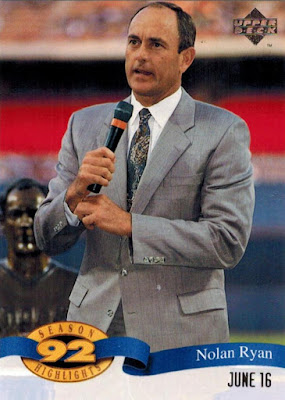 Here's a nifty card for my "interviews/speeches" mini-collection that I'd never seen before John sent it along.
Also I'm thinking it's time to come up with a more catchy name for that mini-collection. 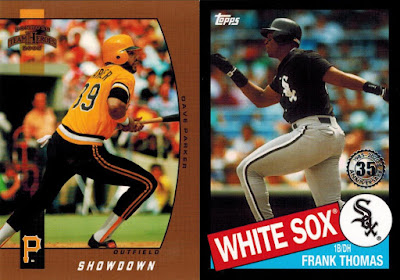 One of the better blogosphere developments of 2021 was seeing the return of (a different) John from the long-defunct "Cards from the Quarry" blog, one I devoutly followed and read way back in my early blogging days.
Coupled with that was the return of his "Sunday Trade Bait" posts, which yielded a handful of great binder additions over the past few months - that Big Hurt is a fine example of how great '85 Topps would've looked with black borders. 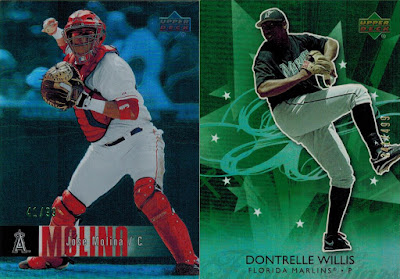 Colored parallels are basically glorified doubles, although at least these add a fun splash of pizzazz and not just a small stamp in a corner. 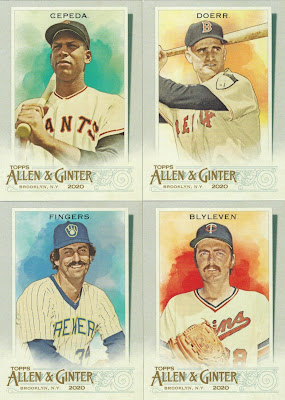 These 2020 A&G SPs came along for the ride with one of my Trade Bait claims - always love a Brewers Rollie Fingers sighting. 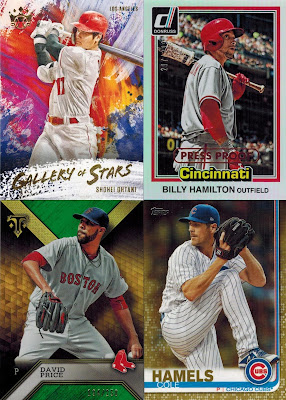 A few more inserts and parallels that caught my eye, including a DK insert that I have to admit doesn't look half bad. 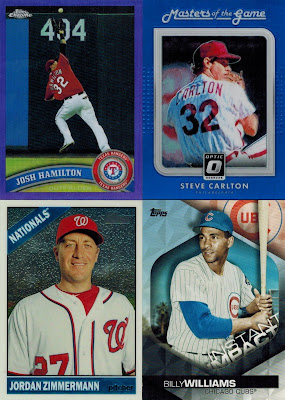 Purple refractors and Heritage Chromes and Cubs, oh my! 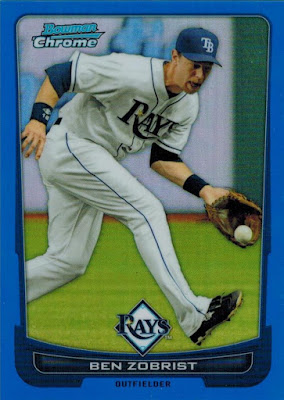 If you were to look through my binders right now, you'd find a lot of pages that feature three, four, five versions of the same card.
It comes with the territory in collecting modern cards. While I don't mind the standard Flagship/Opening Day/Chrome triumvirate that's been around for a good 20-plus years now, nine variants seems extreme, and I wouldn't be surprised one bit to see that number go into double-digits in the coming years. It's hard to know who to blame - Topps for pushing all this rehashed product out, or breaker-happy "collectors" for demanding it? Neither? Both? I don't know.
All I can say is I shudder to think of what other variants Topps has up its sleeve for the near future, variants that could be sacrificed for even a small bit of originality.
Posted by Nick at 5:55 PM

I don't buy them ...but every te-re-re master/mix/etc of albums everyone bought 4 copies of already.. I get ya!

If you're a fan of early 1980's synth-pop, you can name the collection Talk Talk.

Glad you found some keepers in there.

Nine different 2020 sets that essentially use the same design is just sad. When you factor in all of the parallels among those nine sets... it's even sadder.

Adding to what Fuji said... I think I'm right at 60 cards (including parallels) in my Vogelbach binder which use the 2020 Topps flagship design.

It's like Topps has let their design department go and is just recycling designs they have.

I'd call that interview mini-collection "[Players] On the Mic". (you have Pitchers At The Plate, so it fits.)

Activation of amazon Prime should be possible from either connect www.amazon.com/mytv or Primevideo.com/mytv. Both connection give admittance to amazon prime sign in and activation. User should have 6 Digit Activation code before login to this connection. Amazon prime membership can begin after you login to these connection.
Read more…