Keep it a secret 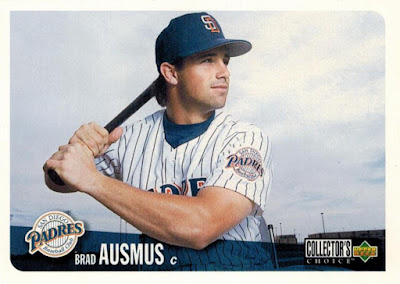 There's a certain thrill in being in on a really good secret.
I've been blogging for almost ten years now, and the blogs in general have long occupied a substantial place in my card universe. But every time I find myself scrolling through chats about group breaks and PSA slabs and all the other hot-button topics of the day, I'm reminded of how much of a secret the blogs remain to the vast majority of collectors out there, how little of a space we occupy. When you zoom out a bit, and see the whole landscape of the current card community, I really don't think a whole lot of people know we're here.
And honestly, I'm kinda okay with that. 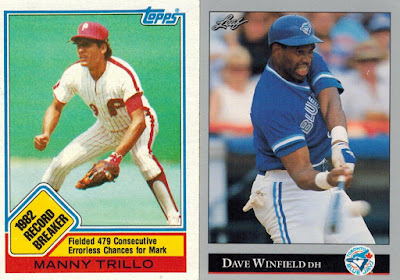 While I love seeing the blogs constantly grow with new faces and names, I often worry about an influx of chasers and profit-seekers ruining an otherwise peaceful place, a beautiful co-op full of collectors who support each other and send stuff back and forth for no other reason than simple generosity.
Even though I don't blog as much as I used to, make no mistake - I still get more solace out of the blogs than any other place in the hobby. 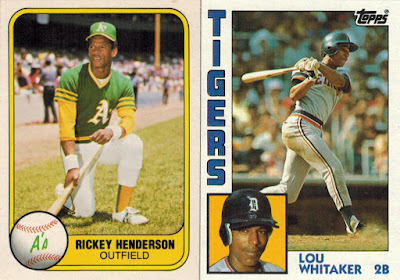 Even the readers among us, those mysterious folks lurking in the background, have repeatedly shown themselves to be among the most gracious members of this community, and I've had the good fortune to receive some excellent cards from a couple of those readers lately.
A reader named Dave S. has sent me a flurry of packages in recent months with many stacks of cards that contained, let's see - one, two, three, four, five... 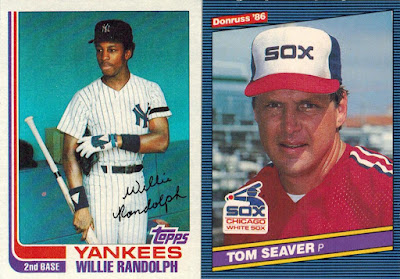 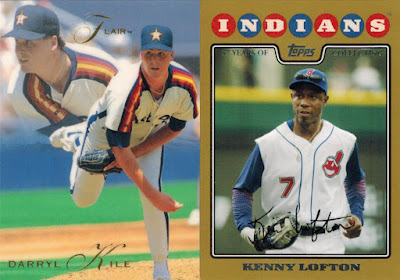 As if seven Dime Box Dozen needs wasn't enough to tide me over, Dave also sent along a bunch of stuff for my bigtime player collections. 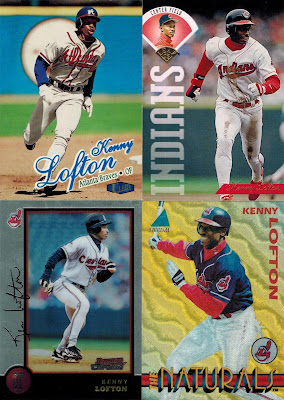 Send me all your Kenny Lofton cards. 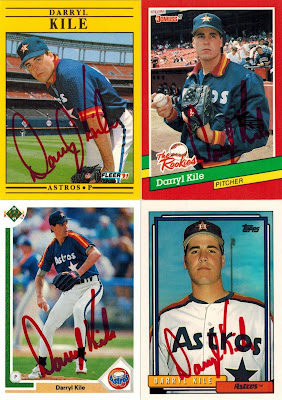 Then came the four(!) Darryl Kile autographs.
I've never been a huge TTM/in-person autograph guy, but these are much, much appreciated, and will forever be cornerstones of my Kile collection given that he's tragically no longer around to sign for his fans. 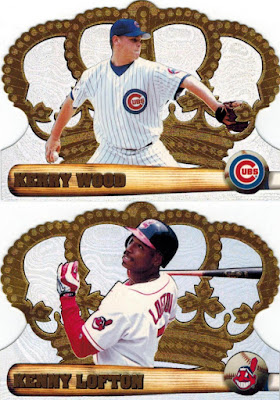 Only the '90s could pull off crown-shaped baseball cards. 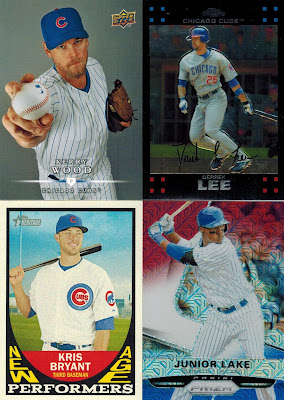 I'll always take any spare Cubs people have sitting around - and yes, I still hoard Junior Lake cards for some reason. 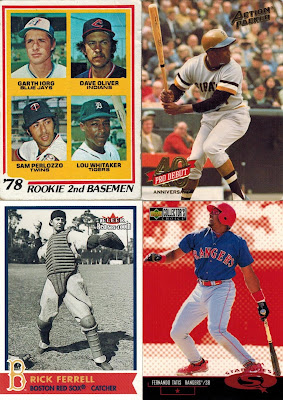 Like any good blog trade package, there was a whole lot of randomness in the cards Dave sent me - from old-time catchers to Lou Whitaker rookies, there was a lot to like. 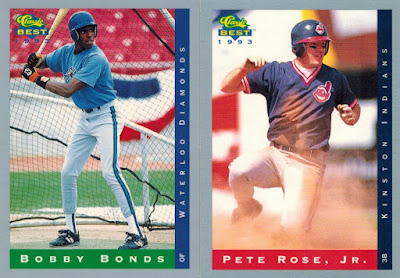 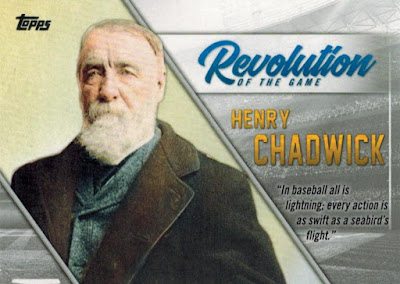 I'd have to check to be sure, but I'm pretty sure this is my first Henry Chadwick card, and that's a shame since he's considered by many to be the father of baseball.
I'm a bit ashamed to admit that I had no idea this card existed, and there's a good chance it would've remained a secret if Dave hadn't come along - just another reason we bloggers are sitting on the best-kept secret in the collecting world. 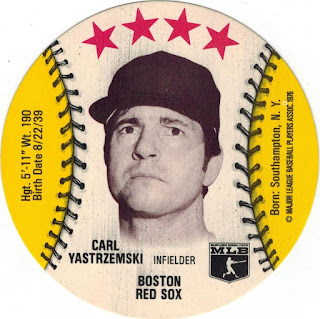 It's hard to explain the excitement I feel over seeing an I'm sending you cards! email pop up in my folder.
It's even harder to explain how I feel when that email says I'm sending you a '70s Yaz disc! like the one I received from a different blog reader named James C. a while back - seriously, who just has these to give away?! 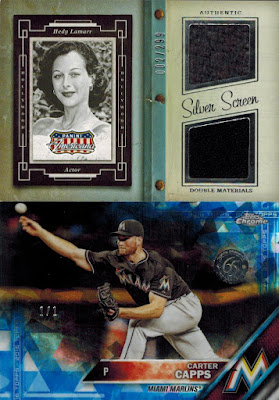 James also sent along a couple other things I feel wholly unworthy of even owning in the first place.
These two don't fit snugly into anything I collect, but no matter - I won't turn down 1/1s or dual-relics of Hollywood legends like Hedy Lamarr. 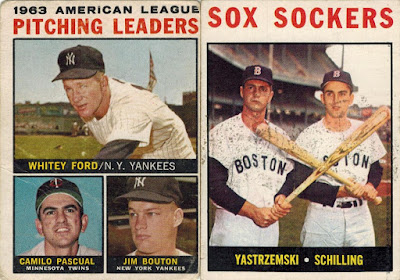 I'd received a different package from James a month or so earlier that somehow even managed to pack more of a punch, mostly because you just don't see this kind of vintage fall out of trade stacks very often. 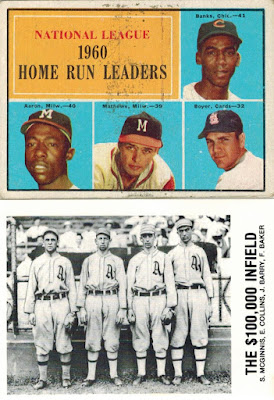 I can't say I'm the biggest Leader Card collector out there, but no way am I passing up a chance to own a card with Ernie Banks, Hank Aaron and Eddie Mathews on it (oh, and Ken Boyer, who kinda seems like an afterthought). 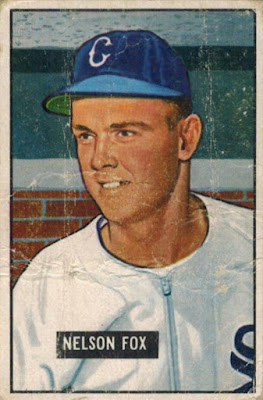 But all that somehow paled in comparison to the real gem from James: a '51 Bowman Nellie Fox rookie card!
This predates the next-oldest Fox I own by nearly a decade, and I've actually seen this exact card with asking prices hovering around $100 at card shows. It's on that long list of heavy-hitting cards I pretty much assumed I'd never own. And someone sent it to me for free, just for the heck of it. I'd bet good money that the blogs are the first and only place where anything like this happens, or would ever happen. Easily.
The joyous and unworthy blogger in me feels like shouting right now, but I'll try to keep it to a whisper when I ask you: isn't this little corner of the card universe great?
Posted by Nick at 5:30 PM

Yes...it is a great little corner that I stumbled across. The blogs were an unknown to me...then I found The Dime Box and all the fascinating tangents and people it has led to.

Keep up the good work my friend...I'll be here...lurking, learning and loving it.

The "Blogs" are a great place for us. 2013 seems like a long time ago now when I stumbled across the Dimebox den. Remember, your blog was the cause of mine. As I'm sure that many other bloggers today's started up after giving you a read. Great package from Dave.

One of my favorite blogs.
Wonderful post.
Jaw-dropping cards, especially that Nellie!
The best secret ever.

I'm very happy to fly under the radar in this hobby.

Great mix of cards, as always!

I love our little corner of the card universe... but I wouldn't complain if we saw it expand. When it comes to our hobby, I've always been the more the merrier kind of guy. That being said... I think other forms of media will prevent that from happening. That's okay too, because the blogosphere is a great community of collectors regardless of how big or small it is.

P.S. Reader Dave and reader James sure hooked it up. Great stuff.

Blogs are great. I'm glad to be a member of the community even if I don't post all that often either. And Hedy Lamar is of course Hollywood Legend but she's also an inventor whose work paved the way for modern wifi.

The name Hedy Lamarr always makes me think of the running gag in Blazing Saddles.

I agree 100% on your statement of blogs vs other medium. It's almost like a fraternity.

Congrats on the bounty of so many great cards! It's hard to choose a favorite. I'm obviously partial to the Red Sox cards like the Yaz disk, but the beautiful Lamarr and Fox rookies are awesome!