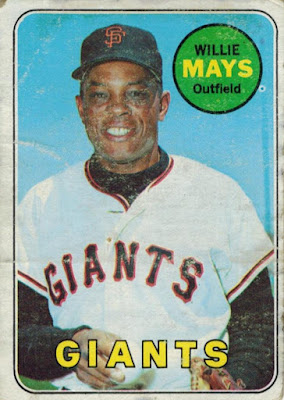 Good news from Dime Box HQ: yours truly is fully vaccinated!
I'm obviously glad to be vaccinated, but with the stressful firestorm that the last year has been, I feel more relief than anything else. I'll also freely admit that one of my first thoughts as I was driving home the other day was: hey, I can do card things again! I don't even remember the last pre-COVID card show I went to, and the excitement at the possibility of going to one came flooding back to me in that moment.
But even though a couple local shows have started to open up again, I had to catch myself and say let's wait a little bit. I don't wanna immediately jump back into huge gatherings right away, because there's still risks and responsibilities in post-vaccination life. The flea market around here is re-opening this week, and for now I'm planning on shooting for that since it's outdoors. Apart from that I think I'm still a month or two away from truly feeling comfortable at a card show, or large enclosed spaces in general. (Still planning on the National this summer!)
But even without card shows, there still hasn't been a lack of incoming card excitement around here, by any means - take the above '69 Topps Willie Mays I randomly won in a contest from Kevin of "The Diamond King" blog, a card that just so happened to also be on my Keep Dreaming want list, too! 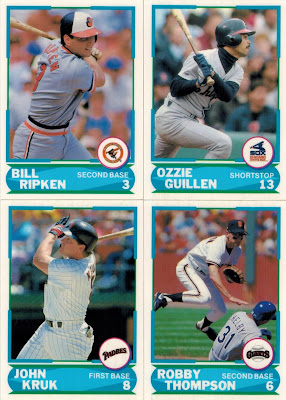 I also requested this fun quartet of Score Superstars from Bo of "Baseball Cards Come to Life!" recently, all of which hit various player- and mini-collections of mine.
(Is it wrong that I get just as much enjoyment out of my Billy Ripken cards as my Cal Ripken Jr. cards?) 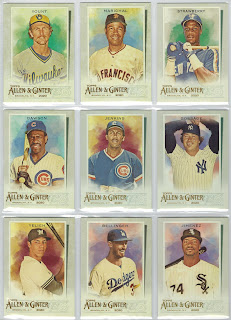 Blogging legend Mr. Fuji of "The Chronicles of Fuji" was nice enough to help me out in a big way with my 2020 A&G wants, which was nice because I seem to buy less A&G retail with each passing year. 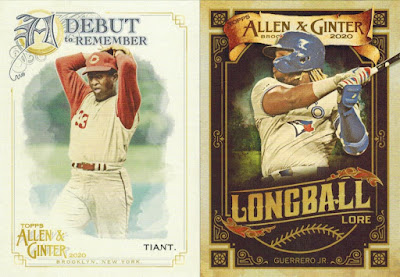 Fuji also helped me out with a couple A&G insert needs, and I'm especially fond of that Luis Tiant since he's criminally underrepresented in the world of modern baseball cards. 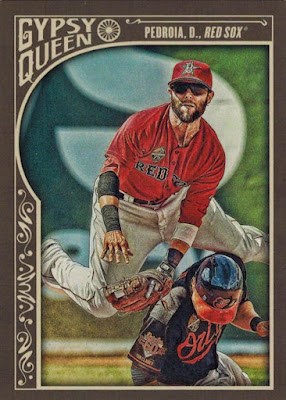 I've also had a steady stream of surprise PWEs show up from longtime friend of the blog gcrl of "cards as i see them" fame, one of which featured this nifty Dustin Pedroia double dip off my Dime Box Dozen list.
As is the plague that afflicts many card collectors, I owned a mini of this one without having the standard base card, and I just couldn't abide that. 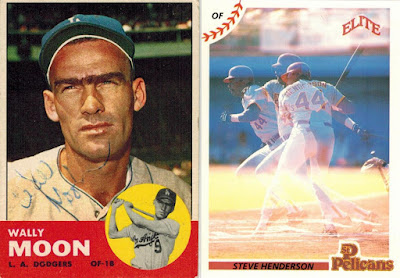 A couple big surprises here - not sure if that's a real signature on the Wally Moon, but even if not it's a cool card of the Mighty Unibrow I didn't already have.
Also even though Senior League mostly became a short-lived footnote in baseball history, I love that their baseball cards were high-quality enough to feature fancy multiple-exposure shots. 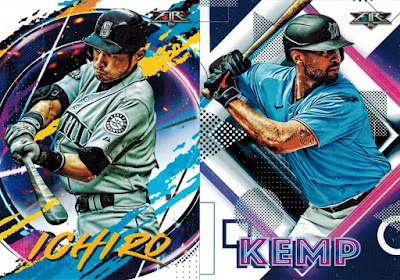 I never did see a single pack of 2020 Topps Fire at any of my local Targets - not a huge tragedy, but I probably would've bought some if I had.
Thankfully people like gcrl were luckier on that front, and decided to spread the wealth - the Kemp is especially welcome since it's a zero-year card that somehow got the green light from Topps, as he never played a single game with the Marlins. 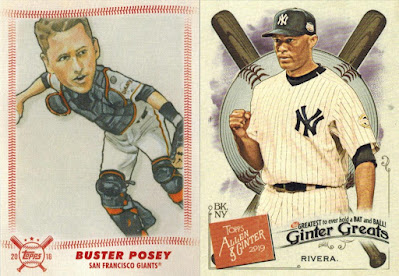 Another envelope I recently received from gcrl suggested he'd done a deep dive through my want lists - don't get to cross off many cards from my 2018 Topps Big League needs these days. 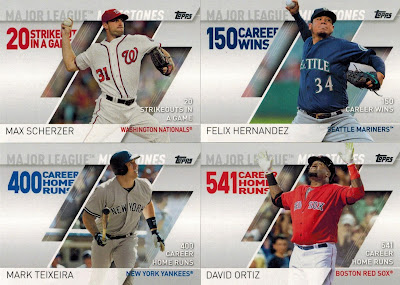 It was such a deep want-list dive, in fact, that he found cards I forgot were even on there in the first place - I have absolutely no recollection of creating lists for these.
Gotta love when that happens. 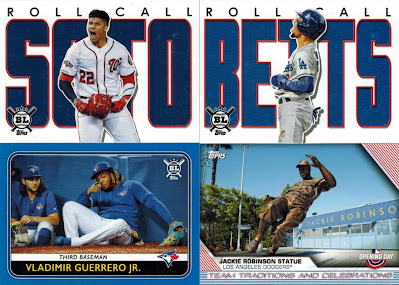 Greg of the legendary "Night Owl Cards" blog also sent me a stack of cardboard out of the blue recently.
No card shows means less current cards coming off my want lists, but thankfully people like Greg have been nice enough to help me whittle those needs down bit by bit. 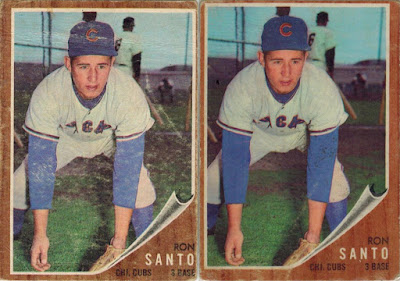 Greg also sent one of the more puzzling items I've ever received in a trade package - a laminated baseball card.
On the left is the weathered '62 Santo that's been in my collection for many moons now, and while it's tough to tell from the scan, the card on the right is indeed laminated(!). Never once have I ever thought to laminate my baseball cards, and I can't help but wonder why someone else would. I found myself in a bit of a conundrum deciding which copy to keep.
In the end, I decided to hang on to the beat-up Santo since I've had it for so long, but I thank Greg for allowing me the odd pleasure of holding a laminated baseball card in my hands. 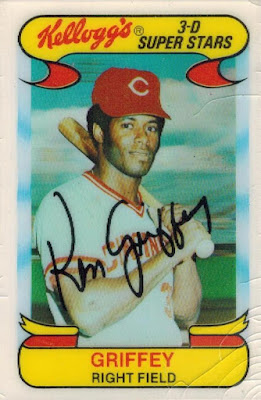 A million bonus points to Greg for sending me a Kellogg's card I needed with this spiffy Griffey Sr. 3-D beauty.
(How long until we have to start saying things like Fernando Tatis Sr., or Vladimir Guerrero Sr.?) 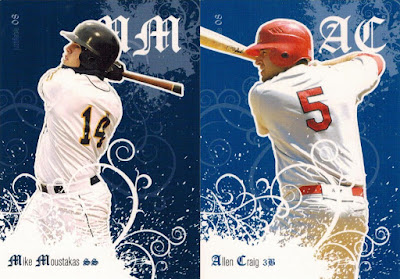 I claimed a nice little lot of minor league cards as part of an anniversary giveaway from Gregory of the "Nine Pockets" blog.
This design....well, isn't the best, but I always love getting minor league stuff of guys I collect - yes, I still want your Allen Craig cards even though he fell off the face of the earth sometime around 2015. 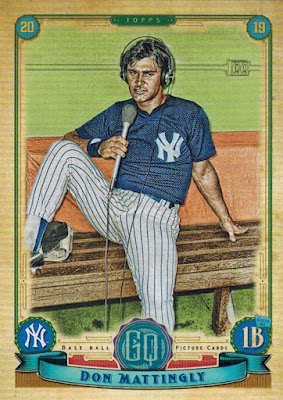 Finally comes a quick two-card envelope I received from local blogger Tom of "Waiting 'til Next Year," someone I'd like to meet in-person at a local show sometime in post-COVID life.
We've exchanged a number of cards and packages through the mail over the years despite not living terribly far from one another, and Tom floored me by tracking down this tough Donnie Baseball Gypsy Queen SP off my Keep Dreaming list, which is an especially glorious hit for my interview mini-collection. 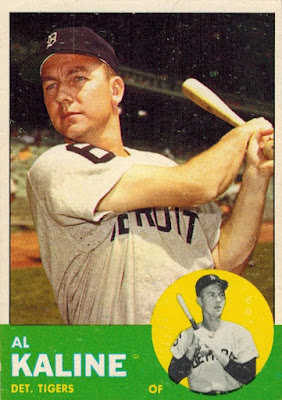 I don't know what I was expecting when I saw that package from Tom on my doorstep, but I certainly didn't think I'd see a 1963 Topps Al Kaline in there!
It's understandable that I'd want to start planning my post-COVID schedule the minute the vaccination needle dried, but again, I have to remind myself there's absolutely no rush here. There's a light at the end of the tunnel, yes, but still a ways to go before things are truly back to normal. Anything to keep me from fantasizing too much about those sacred dime boxes and discount vintage. In due time, Nick.
But I can't really call the COVID era a dry spell for my collection, not when people are sending me '63 Al Kalines and stuff.
Posted by Nick at 5:30 PM

Congrats on the vaccination (PSA: remember it takes a couple of weeks after the 2nd shot before you're fully 'covered'), and congrats on the 1969 Willie Mays and the other cards. A nice batch of cardboard!

Wow to the Mays and Kaline! You've got some generous pals!!

That's the Nick! Congrats, two weeks to settle those antibodies. I've been fully vaxed for 2 months, and man I it feels so good to go places without a mask. Keep in mind many places (hotels ie: most card shows) still require masks, and I get that as travelers come from all over the place. Be safe, envious of the National (as always).

Went to a card show in Kansas last week. WAY too crowded with desperate collectors.

That laminated Santo is so weird. I appreciate you sending it my way and I'm glad the Mattingly and Kaline were a hit.
Congrats on getting that second vaccine! The biggest difference for me is being able to hang out with my parents without all the safety measures and masks in place. We're so much more relaxed now that we're all vaccinated.

Congrats! I imagine that is a weight off your shoulders.


Laminating the card must be like the vintage version of encasing the card in plastic like PSA does today. Only drawback is that you can't free a laminated card from its prison.

Congratulations! I'm not in any rush to hit up a show either.

Glad you got your shots! I'm getting my second one next Tuesday. Planning my first card show for May 16 if it's happening on schedule.

Very nice pickups! Glad to hear you're vaccinated. I just got vaccinated on the 10th but I'm still planning on quarantining at least through the end of the month. And even after that I still don't plan on letting my guard down.

Congrats on being fully vaccinated

That Mattingly cartoon card is one of the worst I've ever seen.

Congrats on being fully vaccinated! I assumed you've been vaccinated for more than 2 weeks at this point.

Congrats on the vaccination! I got my 2nd shot Tuesday. Oh, and sweet cards too ;)

I like that Mattingly card, weird pose but does a good job capturing his personality. He was never one for formality. That Mays is a fantastic contest win!
Glad you like those Score cards. Already pulling cards for our next trade!

Hoping the National happens and I get to meet some other bloggers in person.

Wow that's a killer Kaline! I like the Pedroia and Ichiro Fire, too. And the Steve Henderson is neat, I've never seen Senior League triple exposure cards before.

Hope you're able to to attend card shows again soon - especially the National! I really wanted to go to last year's, which was supposed to be in NJ.