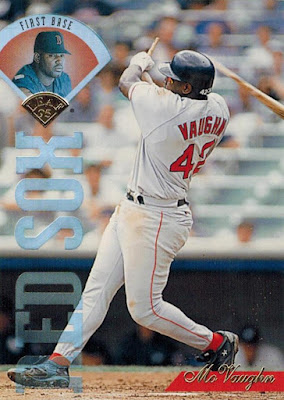 Sometimes, if my brain insists on torturing me, I start to realize how daunting collecting baseball cards can be.
There is a very basic concept at the heart of collecting these weird rectangles: I will never own every single card I want. Nor will I probably even come close. My collection will never be complete, and that's about 1,000 times more true given the array of different things I'm interested in. This is a given in the collecting world, and most of the time, it doesn't bother me - in fact, it makes the thrill of the chase even more delicious. There will always be something out there I want. That's awesome.
But then sometimes I get a package like the one I recently received from Bob of "The Best Bubble" that shows how much great stuff is still floating out there in the card universe, right under my nose, which in turn makes me remember the scores of other gems I might never discover, and gets my stomach churning. 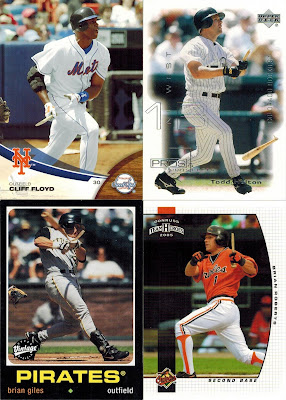 Broken bats are a mini-collection of mine, and it always seemed to me I have a harder time finding them than, say, cards of guys signing autographs, or plays at the plate.
But then someone like Bob sends along not one, not two, but five new broken bats for my binders - including one of an upper-tier player collection with the '95 Leaf Mo Vaughn. 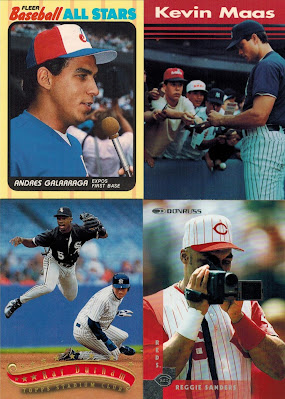 To even think of securing all the cards featuring one of my mini-collections is daunting enough - much less the dozen-ish different themes I'm currently going after.
Also I learned that autograph shot is from an all-Kevin Maas oddball set that I could've easily gone the rest of my life without knowing about - also an all-Kevin Maas set is such a classic bit of overproduction-era absurdity. 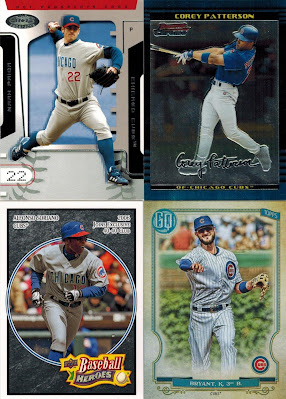 In this lifetime, I can only hope to get a fraction of a percent of all the Cubs cards I'll ever need, but thankfully my trading buddies are helping me get closer to reaching that fraction. 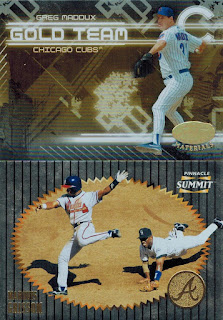 Shiny stuff is always a hit with me. 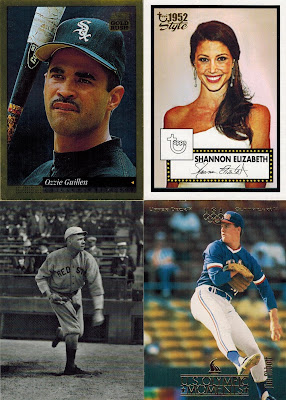 A few other randoms from Bob, including a Red Sox Bambino sighting and a cool Olympic Jim Abbott card I'd never seen until now.
Also I think that Shannon Elizabeth is from a basketball set, but I figured it warranted a cameo here. 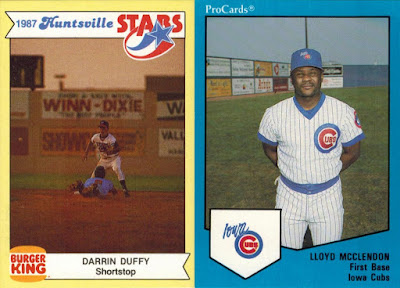 Minor league stuff might be the most daunting of all baseball cards, mainly because there's so many of them out there you never see made by Burger King and the gazillions of other strange, wonderful brands.
These two from Bob do a good job of showing one of the more consistently pleasing parts of minor league cards - outfield wall ads! 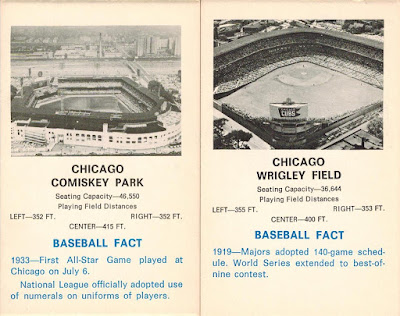 It still floors me how often I receive cards that totally stump me - I have absolutely no idea what these are, but I sure like 'em.
It's one thing to imagine all the cards I know I need that are still out there, but it's another thing altogether to think about all the stuff I don't even know exists in the first place (if that makes any sense). Budget also plays a big role in the sometimes-daunting nature of baseball cards - I just don't have the money to secure a lot of the big vintage cards I want, and I doubt I ever will (unless someone wants to just send me a '59 Bob Gibson or something).
I do, however, make do with what I can, and I certainly won't ask questions like Who is Herman Wehmeier? when someone like Bob sends me something from '53 Topps out of the blue. In better times I realize I'll find what I find in this collecting lifetime, and have fun doing it. It's dangerous to think of collecting in terms of an end game. Every time I'm lucky enough to welcome a new card into my collection is an absolute joy. Knowing there's no end in sight to my world of baseball cards is a thrill. A perpetual thrill.
Collecting cards should never be daunting, and in those moments of weakness where I start to believe the opposite, I'm quick to tell my brain to just shut up, please.
Posted by Nick at 5:30 PM

Some great cards! I believe the stadium cards are from 1969 fleer cloth stickers. I have the dodger stadium card from that issue

Shut up brain. Don't you know that's exactly what baseball cards are for?

The Wrigley and Comiskey cards are very cool. I hope one of your readers has information on them.

Can never go wrong with Shannon Elizabeth. Those broken bat cards are nice. Mo probably broke one every other bat. Good cards and post.

Bob has a good eye for stadium backgrounds.

Getting another package ready for you. Any new mini collections?

The photographer is far too close on that minor league Duffy. Should have been many more miles away before clicking the shutter.