The non-sport heroes of A&G 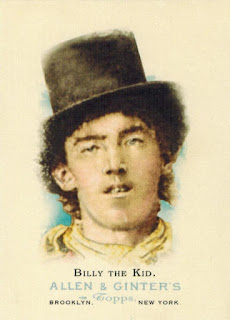 The other day, I was trying to explain Allen & Ginter to a friend of mine who knows almost nothing about baseball or baseball cards, and even I was surprised at how crazy I sounded.
It's these cards they make now, they're based on a set from the 1800s. But it's not all baseball players though. It's got historical people in it, too. Oh and weird current celebrities. Oh AND some inanimate objects. Not surprisingly, I got a quizzical stare in return, and pretty much stopped trying to make any sense out of it. Because, really, when you think about it, the whole thing is a bit insane. Why would anyone who collects baseball cards also want cards of ancient Greeks and movie stars? It's not logical.
While I was thinking about that conversation, I decided to have a sit-down with the non-sport A&Gs I own. All of us probably have cards we don't look at as often as we should - and these are near the top of my list. As I went through the strange stacks of A&Gs I've accumulated over the years, I was reminded of how diverse the selections have been, and how much fun they've been to collect. True, Topps's non-baseball picks have (mostly) ebbed in interest as the brand has gone on, but taken as a whole, there's still a lot of fun stuff in here.
At some point I had the idea to pick my favorite non-sport card from each of A&G's 15-year(!) history - and while I know there's a large community out there who don't care for A&G's non-sport stuff in the slightest, I truly hope there's at least one piece in here that grabs your attention, makes you say hm, never thought I'd see THAT on a baseball card. 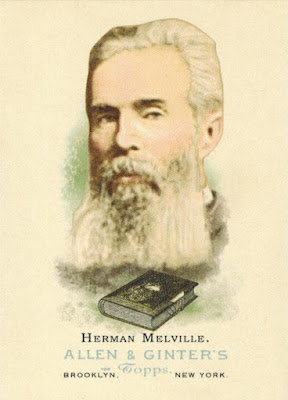 2006 - Herman Melville (Card #341)
I actually remember the first time I opened a pack of A&G, way back in 2006.
Even though I was fully immersed in sports cards by that time, my reaction then was a bit like my friend's was the other day: why am I getting cards of Paul Konerko and Billy the Kid in the same pack? It was weird, and unlike anything I'd ever seen on cards before. But even then I knew I wanted to collect as many of those wacky non-sport heroes as I could. Billy the Kid, Abraham Lincoln, all of them. This was a set for me.
And while it took another decade or so for me to become a full-on book nerd/Lit major/general fiction fanatic (and a huge Melville fan!), it was obvious way back in 2006 that I needed the Herman Melville card, because what the heck is that guy doing in a Topps set?
(Runners-up: Billy the Kid, Takeru Kobayashi, Buffalo Bill) 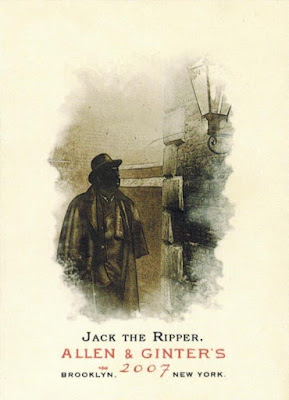 2007 - Jack the Ripper (#228)
As if authors and hot-dog-eaters weren't enough, A&G hooked me even more by including Jack the Ripper in their sophomore set, and it remains one of the spookiest (and coolest!) baseball cards I own.
(Runners-up: Groundhog Day, Ken Jennings, Mark Twain) 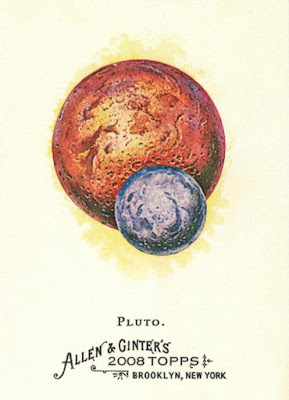 2008 - Pluto (#233)
If I had to choose, 2008 was probably the pinnacle of A&G's non-sport selection - I remember these better than almost anything that was in the standard baseball portion of that year's set.
Tough to pick a single favorite out of such a prestigious lot, but the Pluto card remains a perennial legend.
(Runners-up: Billy Mitchell, Friedrich Nietzsche, Oscar Wilde) 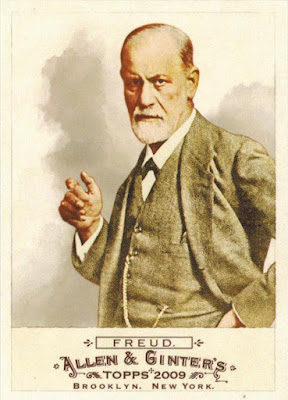 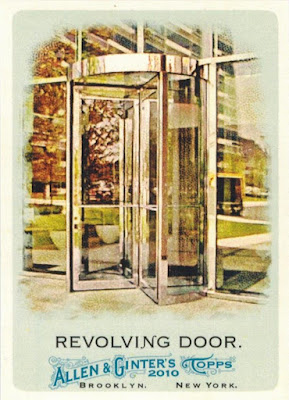 2010 - Revolving Door (#286)
I feel like this is the standard by which all non-sport A&Gs are judged - whenever I complain about the lack inspiration in present-day A&G, I always find myself asking where are all the Revolving Door cards??
It's just such a niche and quirky object that I never in a million years would've thought to put on a baseball card, yet here it is.
(Runners-up: Betelgeuse, X-Rays, King Tut) 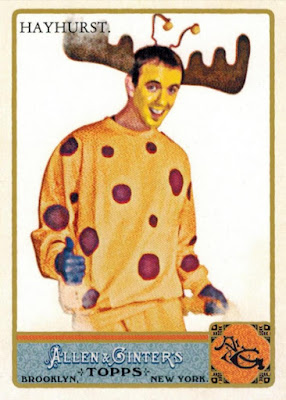 2011 - Dirk Hayhurst (#32)
I'm cheating a bit here - Dirk Hayhurst was a big-league pitcher for a couple years, and his famous Bullpen Gospels book series documents his climb through the minors.
A&G, however, chose to show him in his "Garfoose" alter-ego rather than a baseball uniform, and so he qualifies for non-sport inclusion on this list.
(Runners-up: Wee Man, Peter Gammons) 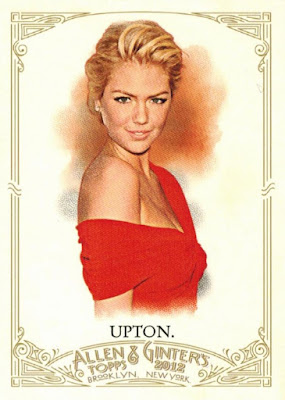 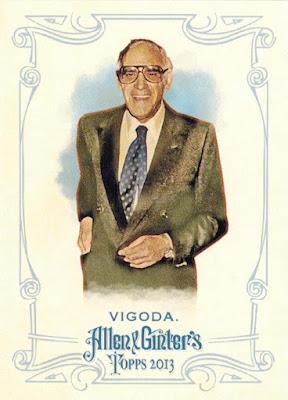 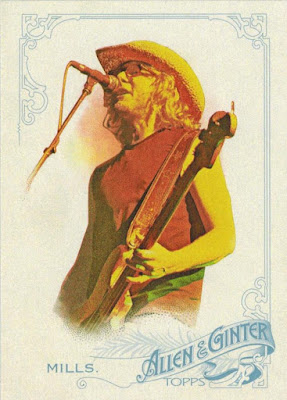 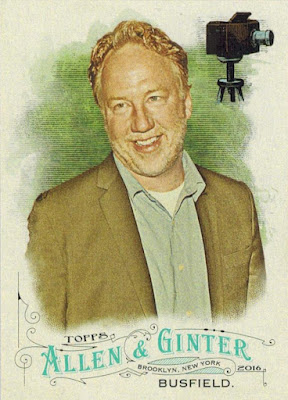 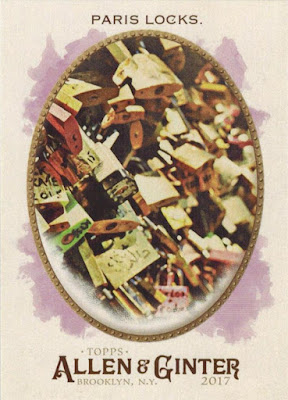 2017 - Paris Locks (#143)
A&G can be educational, too - apparently for years it was a thing in Paris for lovers to place locks on a bridge as a memento, and over time it turned into a kind of shrine, which is documented on this excellent non-sport A&G card.
(Runners-up: Giant Panda, Harriet Tubman) 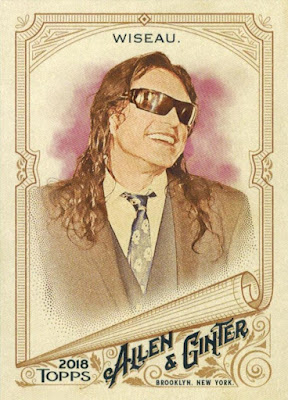 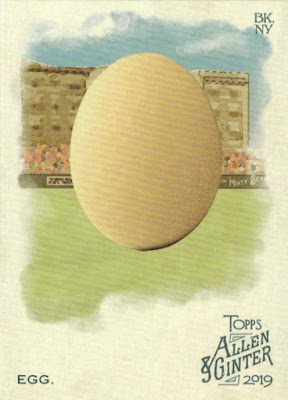 2019 - Egg (#213)
A lackluster non-sport selection saved by one of A&G's all-time greatest cards (baseball or non-baseball).
(Yes, I know The Egg is currently going for crazy amounts of cash, but I'm not selling mine.)
(Runner-up: Mike Oz) 2020 - Ken Jeong (#167)
Last year's non-sport selection was by far the worst in A&G history - the only one I have is of an actor I kinda know from a couple movies/shows I kinda liked.
(Runner-up: None)
I've been thinking about it for a good week now, and I've gone through every single non-baseball A&G card I own, but I still can't come up with a sane way to explain this set to someone who doesn't collect baseball cards. If nothing else, maybe the Plutos and Jack the Rippers of the A&G universe show that sometimes there just isn't any logic to hoarding baseball cards.
I guess for now all I can do is tell people Hey, check out this card of a Revolving Door!...and let the confused looks fall where they may.
Posted by Nick at 5:30 PM

I'm generally not an A&G fan, but my biggest complaint about the non-baseball subjects is not that they exist, but that many of the celebrities I want are only available as autographed inserts... like "Jeopardy James" Holzhauer.

As you know,I LOVE these!! I would have picked Mark Twain and Oscar Wilde in their respective years ...but CAN'T go wrong with Abe Vigoda!!

Billy the Kid, Jack the Ripper, Tommy Wiseau, Harriet Tubman are my favorites.

Jack never got caught, so he wins the round.

I know how I missed that Mike Mills had an A&G card -- I disliked the '15 set so much that I stopped trying to complete A&G -- but that's a big miss on my part.

A&G is a set that makes you expand your idea of what "a baseball card set" is. It's funny how some people can be so open to other card things but closed-minded when it comes to this set.

As a photography nut I tend to explain my interest in just the non-sport AG stuff in terms of how it reminds me of the entangled origins of spots cards and photography. Actually wrote a long post about this recently. https://sabrbaseballcards.blog/2021/03/10/images-as-currency/

Mark Twain > Herman Melville. Melville is okay, but a little dull. And I'm not someone who is easily bored by books .Twain is one of my favorites. Have you read his short story "Blue Jays"? It might be my favorite of his short stories.

I've been pretty down on A&G the past few years and would be okay if they shelved this product for a few years. That being said... your post sure brought back some nice memories. I'll never get tired of looking at cards of Kate and Pluto. I'd love to one day add the Jack the Ripper card to my collection.

I'm totally curious about the hype over the Egg card. Crazy amounts of cash? Why?

I’m not a fan of non sport cards to begin with. I do understand why they are in A&G and that fine with me. I only collect the Tedsox anyway

My interest in a&g peaked from 2008 to 2010 but I do enjoy seeing the checklist each year due to the various non-person subjects.

Mike Mills! Ginter at Their Most Beautiful.

Pluto. Egg. Revolving door. It really is pretty special, I have to admit. I know I sent you several of my non-sport A&Gs from this year, and I hope I didn't give up anything as good as "Egg".

The non-sport selections have been lame recently, but the inserts have been pretty good. If they shelve it, I won't collect any Topps sets unless Heritage comes to another great year. Flagship is nothing but Heritage and Archives and a bad design, and GQ is hideous. Not much left that isn't rookie saturated.

I have come to really enjoy the U.S. historical political figures as well as some of the random celebrities I enjoy (Frank Caliendo, Ken Jennings, etc.). The barbed wire is a new one to me!

Revolving Door is one of my all time favorite cards. I have it in a mini one touch.