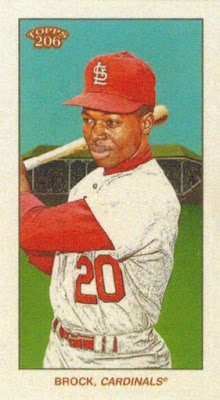 Maybe it's just me, but I find it hard to enjoy something without knowing at least a little bit of the history and background behind it.
If I'm reading a good book, I look up everything I can about that book's author. If I stumble upon a great song, I instantly want to know everything about the band - its members, its albums, its influences. This is perhaps most true for me with the great game of baseball. I feel like baseball, more than any other sport, relies more on its history to continue its legend, and I've devoted much of my life to absorbing as much of that history as humanly possible. I couldn't imagine enjoying the game without knowing who Lou Brock was, what teams he played for, and what his baseball cards looked like.
One of the reservations I have about the recent influx of new "collectors" is that a lot of them don't seem to know the first thing about baseball, or particularly care. I remember once at a card show, way back in the day when Yasiel Puig was the Next Big Thing (seems like a long time ago, eh?), a guy came up to a table I was at and was trying to hock a few Puig cards for a healthy profit. He pronounced Puig's name in a way that rhymed with "twig," and mentioned that he didn't even like baseball all that much. I sighed to myself and continued flipping through a dime box.
That moment couldn't have lasted more than ten seconds, but it's stuck with me ever since - mainly because it goes against everything I love about baseball cards, and everything I believe about truly enjoying something at all, rather than just wringing it dry to satisfy some other motive. 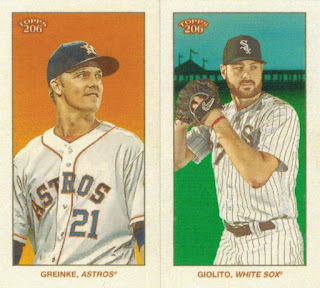 I don't mean to come off as some elitist saying the only true fans of baseball are those with an encyclopedic knowledge of baseball and its history, because that's just as bad.
I just can't help but think that a groundswell of baseball card buyers who don't like baseball doesn't exactly bode well for the future, near or distant. Part of the reason I enjoy the blogs so much is that everyone here is well-versed in the game - I can say the name "Zack Greinke" and everyone will know who I'm talking about. Plus it seems like I'm learning something new every time I click on a blog post. And what's more, some of those cool bloggers will just give you stuff for absolutely nothing - including people like Kerry of "Cards on Cards" who's been running Free Stuff Friday giveaways on his blog for a while now.
I was able to snag a few of last year's Topps 206 minis from Kerry's free-for-alls - I admittedly kinda like these, but they didn't seem to stir up much excitement with the higher-end collectors they were marketed towards. 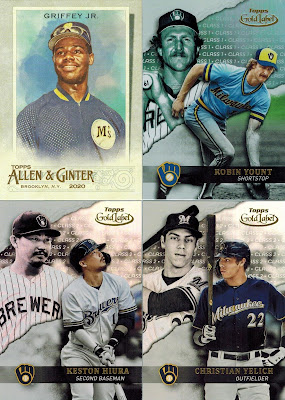 I've never opened a pack of Topps Gold Label in my life, but I've managed to accumulate a fair amount of 'em thanks to dime boxes and such.
Of course, with card shows currently MIA, these three Brewer Gold Labels I claimed from him remain the only three cards I own from last year's checklist (with a Griffey A&G thrown in for good measure!). 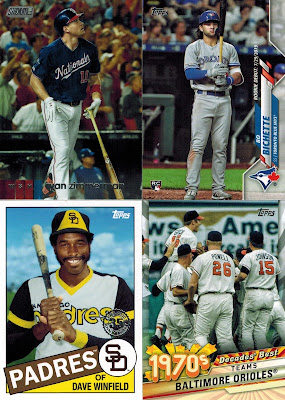 Kerry was nice enough to pad the cards I claimed from his giveaways with a few miscellaneous surprises from my want lists - all are much appreciated, though that '85 Winfield is by far my favorite from this bunch. 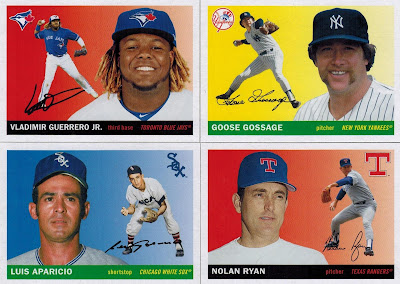 Seems like so long ago now that people were fighting over Archives in the card aisles, and I doubt many of those people even care who Goose Gossage is. 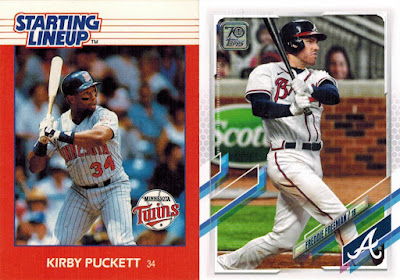 The Puckett was a Free Stuff Friday claim - I'm always here for Starting Lineup cards - and the Freeman has the special honor of being the first 2021 card I've received via trade. 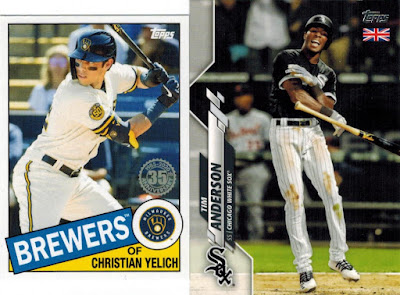 Two cards of dudes I collect from sets I honestly didn't even know had been released - Topps Mini and something called Topps UK Edition(?) which appear to be Flagship doubles with a Union Jack in the corner(???). 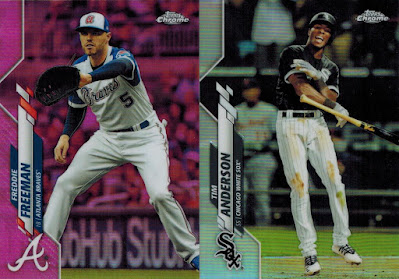 Topps Chrome also qualifies as Flagship Doubles, I suppose, but at least these shiny refractors are a bit flashier - also I think Kerry's subliminally trying to get me to collect a Tim Anderson rainbow. 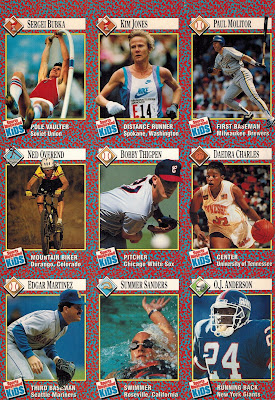 I really only wanted the baseball cards from this SI for Kids page, but I claimed the whole thing because seeing one of these intact shoots me right back into my childhood days of stealing them from my grammar school's library.
Ah, youth. 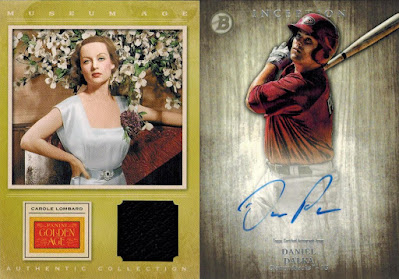 I also recently received a surprise stack of cards from Jeff of "2x3 Heroes" fame, one of the few bloggers I've actually had the privilege of meeting in-person - with any luck, hopefully another such blogger meet-up can become a reality again in the somewhat near future.
I am, admittedly, not the biggest cinephile in the world, and I honestly had no clue who Carole Lombard was, but it's a cool off-beat relic nevertheless - sure beats the 842nd different Nolan Arenado jersey card or whatever.
Daniel Palka is one of those weird middling hometown-team guys I've grown a bit attached to for no particular reason, which made an autograph from his pre-White Sox days an unexpected treat. 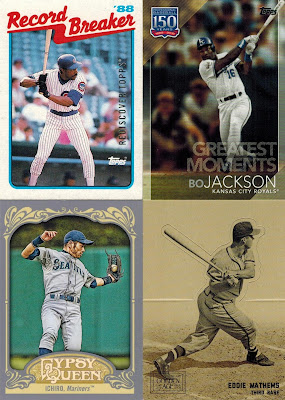 A quartet of randoms from Jeff - the Ichiro is a photo variation SP, and I begrudgingly counted that Andre Dawson buyback as a "new" card for my Cubs binder. 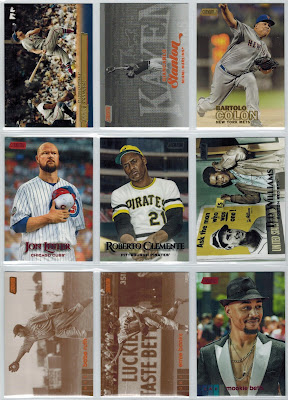 I don't actively seek out Stadium Club parallels, but I'm happy to have any that fall in my lap - especially whole pagefuls like these from Jeff. 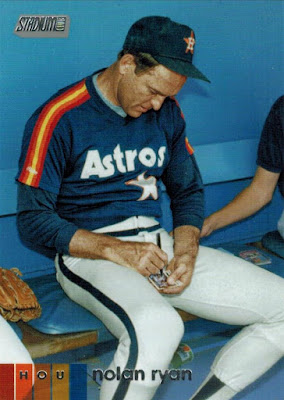 Here's something I never planned on owning - this Nolan Ryan is a photo-variation SP from last year's Stadium Club, and a scarce hit for my mini-collection of guys signing autographs.
Nolan looks to be holding a baseball card here (with a small stack of others at his side waiting to be signed) but for the life of me I can't seem to pin down what card he's signing. Any help on that front would be much appreciated, because I'm always willing to learn everything I can about my baseball cards, and baseball as a whole.
But if someone comes up to me in a Target card aisle and asks me who some old dude named Nolan Ryan is, I'm walking in the other direction.
Posted by Nick at 5:30 PM

Couldn't agree more about knowing/enjoying baseball and it's history. Without that, card collecting seems like a dry, joyless hobby to me.

Great bunch of cards. I love Gold Label, and those look quite nice. The Eddie Matthews popout card looks sweet. And that Nolan is great!

Dude,Carole Lombard was a huge star in her day.. that is cool!

So are Topps UK.. never heard of those!

My guess is that Nolan is signing his 1980 Topps card - looks like a blue banner at the bottom.

I heard a story on a hobby podcast yesterday about some newbie collector knowing enough to show off the notable card they pulled from a pack -- Tatis Jr. -- but not knowing what the "SS" meant next to his name.

So, these folks know just enough to be dangerous, and that's the issue.

That's how Wikipedia has it. Not sure how you pronounce it.

The Ryan, Lombard, and Yelich are my favorites.

You know bloggers are generous when they just casually give away 1988 Kenner SLU cards of hall of famers. And that SI for Kids sheet is sweet. I was really into mountain biking back in the 90's and I remember Overend. And Summer Sanders went to Stanford.

That Winfield jumps off the page. I like the Yelich, Mathews, and Ryan cards, too.

And Elliptical Man, it's pronounced Pweeg

The timing of this post is funny, because I'm waiting on a card of a person I knew nothing about, and I just had to Google this person and find out as much I could about them. The card is a lot cooler to me now simply because I took the time to learn about the subject, and I can't wait to show it off in a future post!

I think Ryan is signing his 1988 Topps card - also has a blue banner on the bottom and matches the photo better.

Never saw that Ernie Banks card before - that's my favorite from this post.

Even my wife knows who Nolan Ryan is.

I wonder what the hobby would be like if it were run by a geared toward people who actually love baseball and baseball cards. How fun would that be? But that's a world where monetization hasn't become the friggin' Meaning of Life for so damned many people. What a sad way to waste a life.

That poor girl was torn to shreds, she was/is new to the card world, baseball and dared ask in a post in a group on facebook what the ss stood for and guys made a mountain out of a molehill, it carried over to the next day in a separate post and even as far as here.The hobby buzz is so huge that it has touched just about everyone.It made for a really bad start to her initiation to cards.