The year of the online dime box 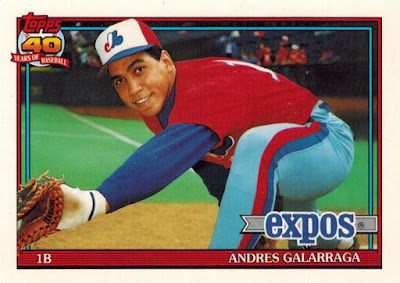 Obviously, 2020 hasn't been a prolific year for dime boxes.
I was able to make it to a card show back in February (seems like a long time ago) before the pandemic  shut everything down. To date, that's the only real dime boxing I've been able to do this year. Even though a few of the shows in the deeper suburbs around me have opened up again, I've made a pact with myself not to attend any for the remainder of the year. I miss card shows more than ever, but I still don't think we're anywhere near the point where they should be starting again -- and I know I'm not personally comfortable going to one.
All this insanity, of course, has made me all the more thankful for the angelic emergence of the Online Dime Box here in the maddening year of 2020. 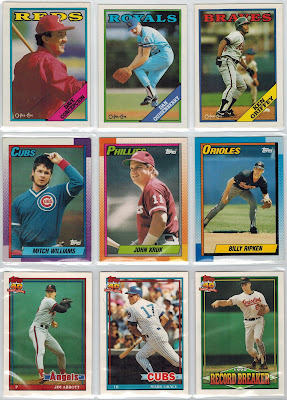 The Online Dime Box (aka baseballcardstore.ca) has been a hit around the blogosphere, and while it took some trials and tribulations to get used to the site itself, I placed my first magical order from them over the summer and was instantly hooked.
It didn't take long for the dime box itch to strike again, and so I recently received my second stack of cards from the Online Dime Box a couple weeks ago, an order that was every bit as fun as the first. Better yet, they've since instituted a program a la COMC where you can build up purchases over time and have them shipped whenever you want, so what you'll see in this post is actually a culmination of a few different trips to the dime box.
As I mentioned the last time, the company itself is based in New York, but the site has a Canadian domain name... 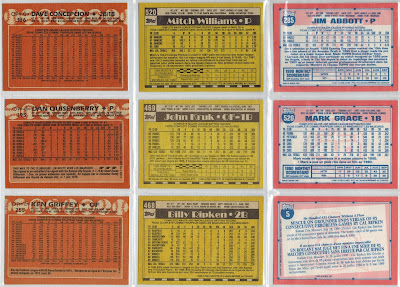 ...which I guess explains why they have so much glorious OPC!
These haven't exactly been common fodder in my dime box experiences, so finding a few dozen of 'em in one easy swoop -- including new pieces for top player collections like Jim Abbott and Mark Grace -- is an unexpected treat. 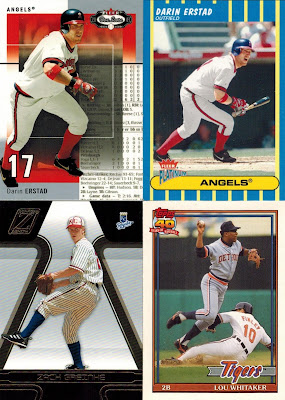 One of the cons of online dime boxing is that it's a lot harder to find mini-collection cards -- most of the cards on the site don't have pictures, which means I have to do a lot of cross-referencing with TCDB and COMC.
Nevertheless, I was able to score at least a few new themed hits this time around (yes, that Whitaker is another OPC). 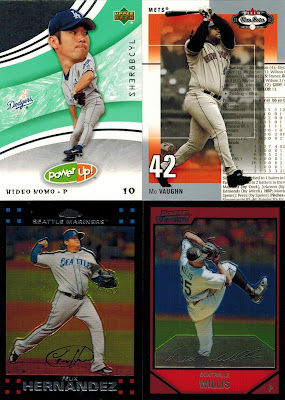 Cards for some of the newer additions I've made to my player collection pantheon -- with a windup like that, I should've been collecting Dontrelle Willis a long time ago. 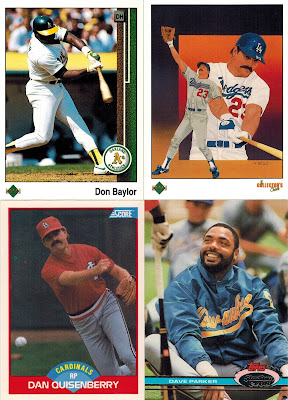 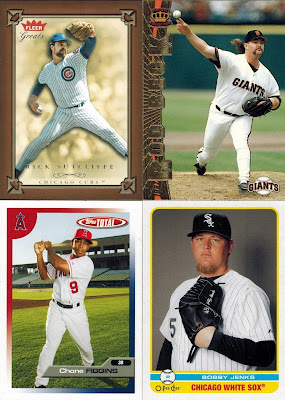 Cool dudes from sets I miss. 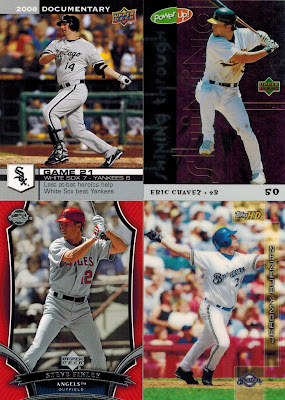 Cool dudes from sets I don't miss and/or never cared about in the first place. 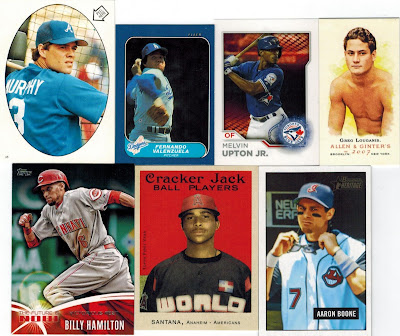 Simply looking up the keyword "mini" in the site's inventory has become an especially prolific search for me.
In the end, I came up with sets from Cracker Jack to Bowman Heritage, and guys from Fernando Valenzuela to Greg Louganis(!). 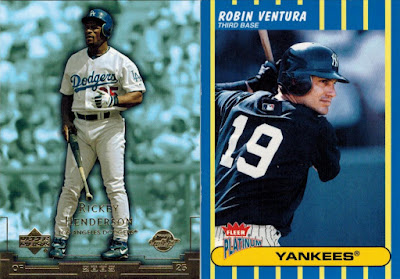 If you've read this blog at all, you know I always enjoy seeing legends in not-so-legendary uniforms. 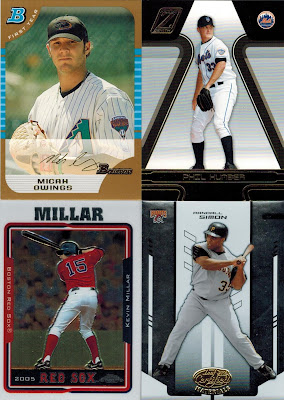 I collect all these guys, and while I don't know if I can classify any of them as obscure, the main trajectory of their playing careers have little to do with why they're in my binders.
Micah Owings was a pitcher who hit better than he pitched, Philip Humber sprinkled a perfect game into an otherwise lackluster career, Kevin Millar's probably more known as a TV personality, and Randall Simon, of course, saved himself from an otherwise unremarkable career by disrupting a sausage race in a particularly memorable way. 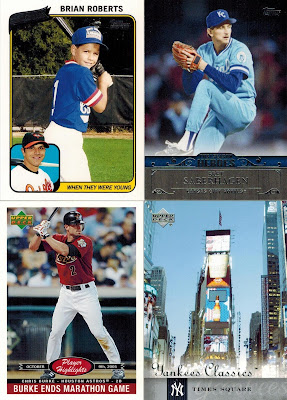 None of these fit snugly into anything I collect, but that didn't stop me from saving them from dime box obscurity (has it ever?). 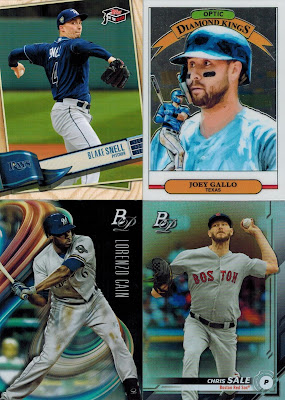 There's even a little latest-and-greatest flavor to the Online Dime Box, which has been a treat since card shows are where I used to take care of less-pressing needs from sets like Donruss Optic and Bowman Platinum. 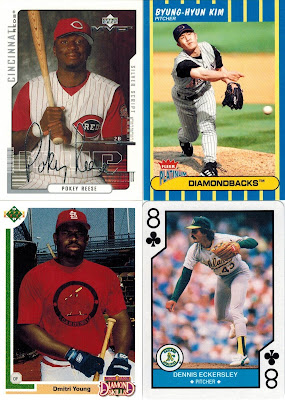 Unbridled randomness is a cornerstone of any good dime box. 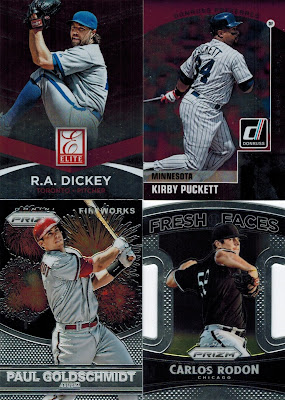 Almost enough bells and whistles for you not to notice that none of these cards have logos.
Almost. 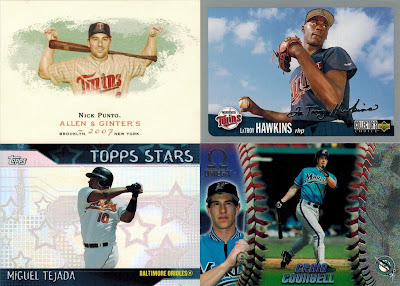 I've never understood why some people don't like horizontal cards.
I enjoy the mixture of verticals and horizontals in my binders, and some photos (like the Hawkins, for example) just wouldn't work as well as plain ol' vertical baseball cards. 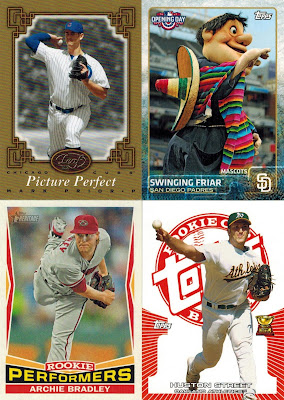 I'd say a good 98 percent of the Online Dime Box's inventory is composed of base cards, but I did manage to find a few scarce inserts and parallels in the stacks.
(And no, I don't know what's going on with that Swinging Friar card, either.) 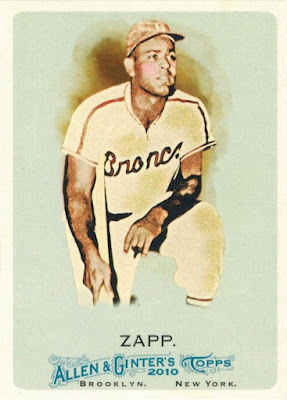 Here's something I can't say about many dime boxes -- I found a card I needed for my Negro Leagues collection!
I think part of the reason this year's been so strange is that, while the pandemic has obviously had a huge impact on the general everyday workings of the world, it's also negated a lot of the pleasures we used to look to when things got a little too crazy or out of control. A lot of the things we used to mark on our calendars just aren't there anymore. Things like card shows. Things like dime boxes.
But at least I know a nice virtual trip through some dime cards is always waiting for me, which is enough for me to decree 2020 as The Year of the Online Dime Box.
Posted by Nick at 5:30 PM

Nice haul. I’ll have to check the site out.
I love the randomness and long forgotten names like Owings, Simon, and Chone Figgins.

As much as you miss card shows,I miss going with you...we're going hog wild when this is behind us!

Louganis has Ginter cards? I wonder if he has an autograph. The only time I've ever been interested in diving is when he dove in the 84 and 88 Olympics.

Henderson with the Dodgers and Robbie with the Yankees. Nice. Liking the Erstad throwbacks too.

I've been using baseballcardstore.ca based on your recommendation from a previous post. It's been great. Like you said without pictures it's been hard finding the sort of random cards I might buy based on just the look. It has been extremely good for me in adding to my various player collections. Especially players that I collect who aren't so hot in collecting circles. I've been kicking around starting a Dontrelle Willis collection myself and I think this post may have just convinced me.

That’s really an awesome haul Nick. Has their site improved any at all? I just couldn’t get past the clunkiness of it when I tried to use it initially.

It's nice to see that I'm not the only one who took advantage of their awesome OPC selection.