It's not easy watching your favorites get old 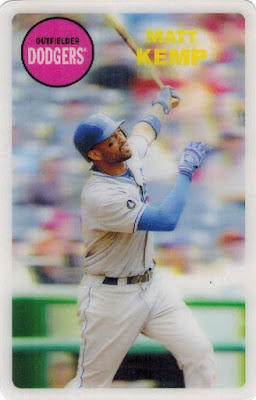 I was watching a Rockies-Dodgers game the other night when, to my surprise, Matt Kemp stepped up to the plate...in a Rockies uniform.

I've been a fan of Kemp's for a while now -- mostly thanks to a particularly touching interaction he had with a fan few years back -- but I honestly forgot he was even still in baseball. The Rockies picking him up after the Marlins let him go earlier this season. Matt Kemp's 35 now, and even though he came out of nowhere to be an All-Star in 2018, his best days looked way behind him when I saw him hit the other night. He looked less agile, slightly pudgier, and just generally over-the-hill. And even though, in reality, he's only seven years older than I am, Matt Kemp just plain looked old.

It didn't really affect me at the time, but the more I thought about it, the more I wondered if this was a marker of something larger. 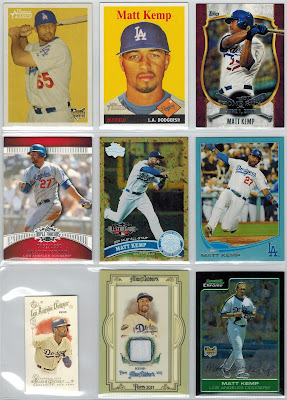 Kemp struck out in the at-bat I watched, and looked awful doing it.

If there's a silver lining here, it's that Kemp did wind up hitting a game-winning two-run homer against his old team later that game (though I was in bed when it happened). But still, the image of him walking back to the dugout after an easy strikeout, looking older and nothing like the Matt Kemp I remember, has stuck with me in the days since.

It's true -- I guess I'm at the point now where I'm starting to see some of the players I grew up watching get old, chewed up and spit out by the baseball machine. 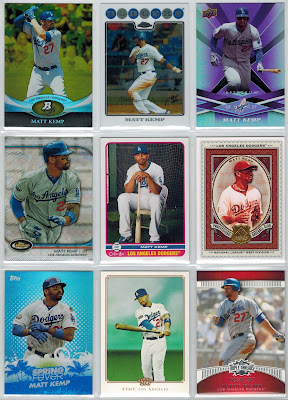 Part of the beauty of baseball cards is that they offer permanent reminders of the heydays of our favorite players, as is the case with the smattering of prime-era Kemps I recently received from ex-blogger and current Twitterer Michael S. -- you veteran bloggers might remember him as Spiegel from "Nomo's Sushi Platter."

I traded with Michael a lot in my earlier blogging days -- it was great to see him reach out to me on Twitter and, better yet, offer to send me some cards! The two pages I've shown here were just a fraction of all the Kemps he sent me over two separate packages, most of which were new to me.

(Also, I didn't even notice he sent me two different copies of that numbered Triple Threads Kemp -- maybe I should consider cornering the market on those.) 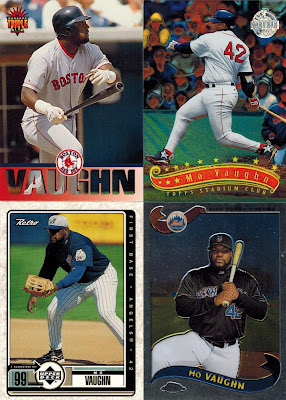 Michael slipped in some side orders with the main course of Kemps -- here's a few adds to my new Mo Vaughn collection.

I've always liked Mo Vaughn, and I vaguely remember his last years with the Mets, but for whatever reason it took until last year for me to really start hoarding his cards. 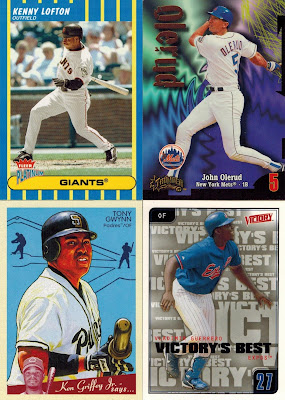 A bunch of fine adds to some of my more tenured player collections. 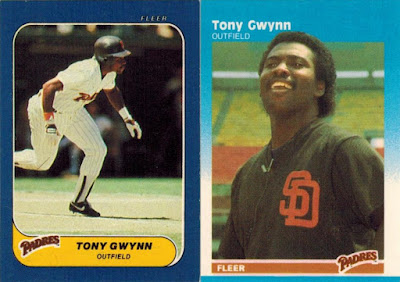 Sadly, I have no memories of Tony Gwynn as a player -- I bet people slightly older than myself went through a similar version of my Matt Kemp experience watching Mr. Padre get older.

Gwynn's quickly blossomed into one of my larger player collections, and while I've never put much effort into chasing these '80s Fleer minis, I'm thrilled to add them to the binders. 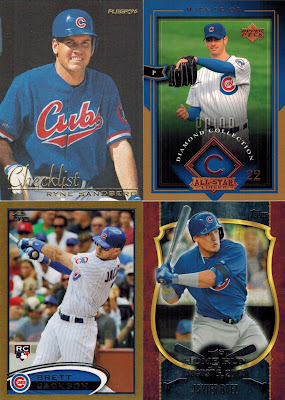 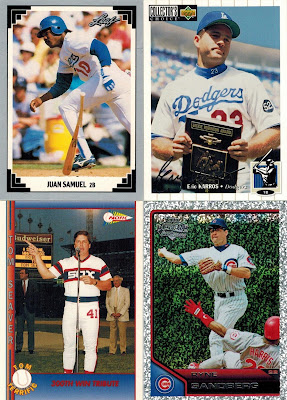 Michael even found a few new mini-collection hits for me -- I darn near missed the busted bat Juan Samuel's flinging away there. 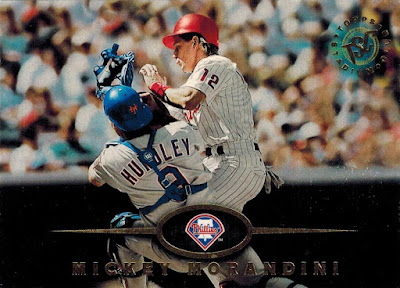 As the players wander into the past, so does the game itself, in some ways -- given today's rules, I doubt we'll see another card quite as violent as this one ever again.

Being a baseball fan is mostly a joy, but the emotions of the game often wander past the simple limits of watching your favorite team win or lose. Sometimes the game gets tied up in us, tells us something about ourselves. For his sake, I hope Matt Kemp plays as long as he wants to, and as well as he can for whatever team gives him a job. He deserves that.

But it'll never be easy to watch my favorite players get old, because it means I'm not too far behind.
Posted by Nick at 5:55 PM

..and they stay forever young through baseball cards...

One that hit me was when Craig Counsell became a manager..im like "wasnt he a rookie a few years ago?" Haha!!

I know you're one of the younger card bloggers out there, so it's kind of funny that you would write about this feeling. There are exactly four active major league players older than I am. (I'm old enough to remember pudgy Tony Gwynn but I only saw skinny, base-stealing Tony Gwynn on baseball cards.)

I am laughing my botay off. Young Nick, had to go to bed before the game was over, now who is getting old? I know different time zones, work and all that, but man you're young enough to go days without sleep, lol. Just kdding. In the same token...when your fav players are getting older....so are you......

Its hard to see players I collected as a kid pass away. Time flies. RIP Tom Seaver and Lou Brock.

It seems Kemp gets "fat" and sloppy when he leaves the Dodgers. Same thing happened when he went to the Braves. Then when he returned to the Dodgers he was back in shape again!

It looks like the last major league player who was NOT younger than I was Tim Wakefield. He's a month and a half older than I am. He's been retired for almost a decade now.

I'm glad I'm not the only one out there that gauges my age by comparing them to current professional athletes. Well. At least I used to do that. There aren't any 48 year old MLB players right now to root for... otherwise I would.

I get the same thing going through and sorting out cards. I remember those who got 3-5 years then disappear like Hank Blalock and Kevin Mench. I go to minor league games and get cards signed. Coaching staff are the ones that hit me. For example Brandon Allen was a player with cards from 10 years ago. Last year he was hitting coach for Springfield Cardinals. Few years back he was in AAA trying to make his way back. It was "Wow!" time sure goes by fast. If MiLB season wasn't cancelled I would have gotten former Giant Brett Pill who is know coaching despite having 2013 and 2014 card as a player.

Yesterday I was doing some research on veteran players who haven't been on any non-online cards. I thought Matt Kemp was one, but then discovered he was in 2020 Fire (as a Marlin)

Ichiro and Bartolo were the last two players older than me, so I've officially crossed that threshhold. Now I'm firmly entrenched in the realm of players with fathers I remember from their playing days (Tatis Jr, half of the Toronto Blue Jays, etc...)

As I watch my Tigers, Miggy seems to on his last legs some days. However, he has three years left on his contract.

And I didn't even realize that Matt Kemp was still playing!

As a Red Sox fan, I was sad to see Tim Wakefield retire. Not because I liked him, but because it meant I was officially older than every player on the team.

I lost track of Kemp after he bottomed out with the Reds last year and had no idea he’d caught on with the Rockies (or anyone else for that matter).