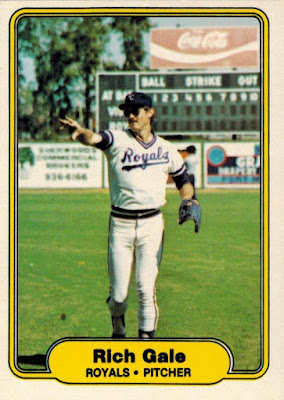 I don't remember the exact moment I made the transition from blog reader to blog writer.

I do know that I read blogs for a good five or six months before I launched one of my own -- I went from not really knowing what a blog was to being absolutely engrossed by this whole universe of people who loved baseball cards just as much as I did. It was just so cool. But oddly I don't recall a specific moment or post that lit the blogging spark in me. I don't recall a point during those five or six months where I said to myself: hey, I've got stuff to say about baseball cards too!

I mostly started this blog on a whim, and I had absolutely no experience writing -- I suppose a good chunk of that first desire to blog was the semi-loneliness of collecting baseball cards when you don't know anyone who collects baseball cards. 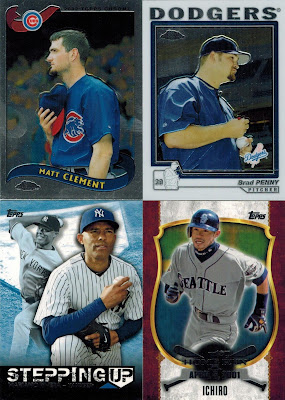 Over eight years later, I think the decision to start a blog turned out okay -- I still don't have any friends who collect baseball cards, but at least now it's not nearly as lonely because I have an entire community of people here on the blogs who do.

I mention all this because two people I've recently traded with have made the jump from reader to blogger. The first is a guy named Bob who's been shoveling cards on me for many months now -- I've already written a couple trade posts showcasing his greatness. But I'm happy to report that Bob has a blog now(!), and it's fantastic, so do yourself a favor and go give "The Best Bubble" a read.

Becoming a blogger hasn't changed Bob's generous ways -- in addition to one of those How the hell don't I have this card already?! cards with the '82 Fleer Rich Gale came this fine array of player and mini-collection needs alike. 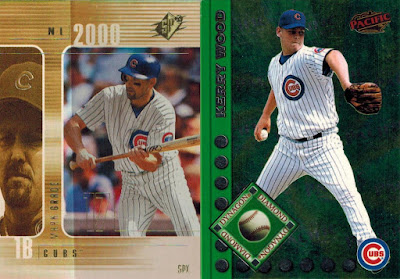 A second package from Bob saw these two nifty Cubs come my way, including the first of my 400+ Mark Grace cards that shows him bunting. 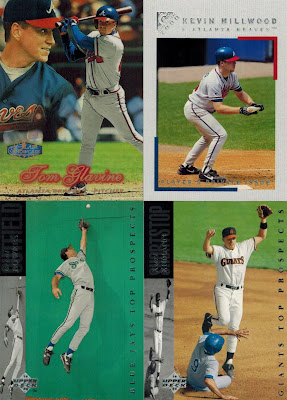 Major league and minor league hits for the mini-collections. 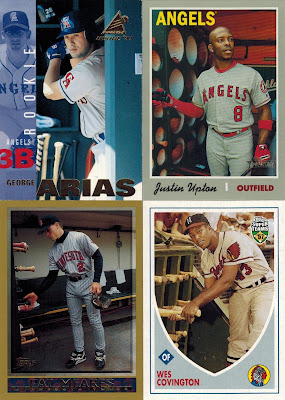 As I mentioned the last time Bob sent me cards, he's underhandedly trying to get me to start a bat rack mini-collection -- I'm still holding off, though I fear my will won't last much longer. 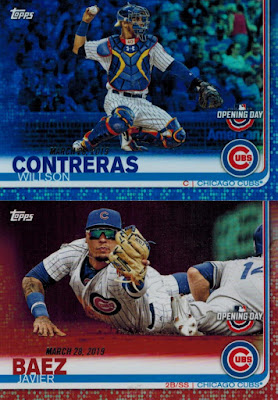 I'm still floored by the number of readers who've reached out and offered to send me cards with absolutely no strings attached over my blogging years -- it's been an unforeseen privilege of my blogging years.

Among the more recent of those kind souls is a guy named Lee, who sent me a package that included these splendid Opening Day Cubs (remember when everyone was freaking out about those red parallels?) with absolutely no strings attached.

But like Bob, it's a privilege to say that Lee (another Dodgers collector!) has also decided to start a blog of his own, which you can see for yourself at "Dodger Cardboard & Other Random Finds." 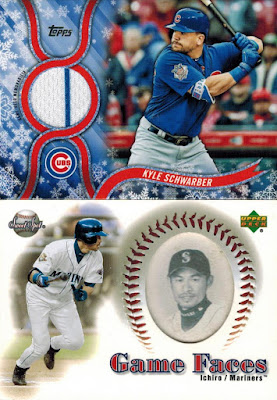 These two also came courtesy of Lee -- and that Ichiro instantly became one of the thickest cards in my collection, at least twice as thick as the Schwarber (which has a piece of jersey in it). 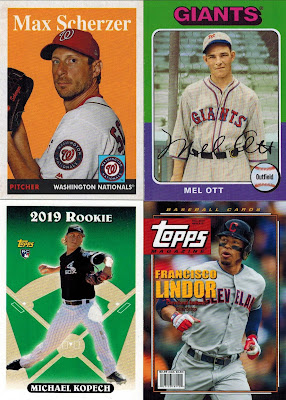 Seems like it's taking me a lot longer to polish off my 2019 Archives needs than any other Archives set in recent memory, but thankfully Lee helped whittle that list down a bit. Some randoms here, including an easy-to-miss Rizzo blue parallel and a couple minor league mascots who might give me nightmares if I stare at them long enough. 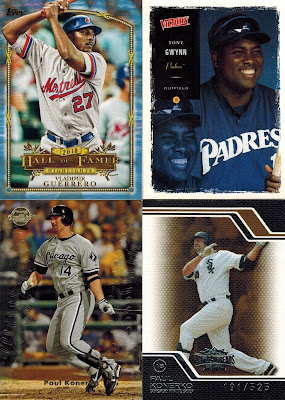 As if all that wasn't enough, I got a second package from Lee just a few days ago that included these top-tier player collection needs (seriously, the blogosphere is a wonderful place). 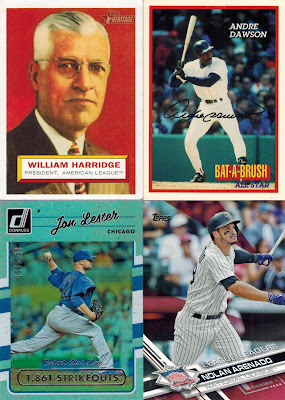 More randomness, including a scarce pink Arenado parallel and what appears to be my first card issued by a toothpaste company(!) with the Dawson. 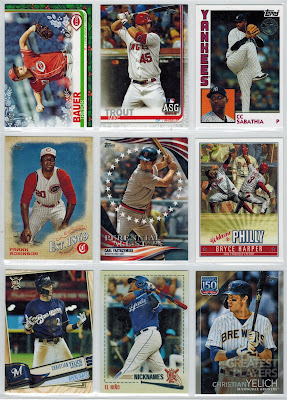 Even more than eight years later, I'm still infinitely flattered when people take the time to go through my lists and carefully select cards to send me -- I'm all about randomness but man is it pleasing to delete want list stuff.

That Bauer was an especially pleasing need, as it's his first card as a Red which isn't something you usually see from a Holiday set (not quite sure why he wasn't in Update, but oh well). 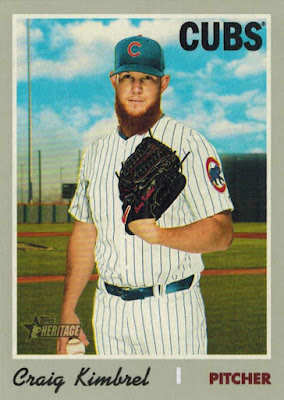 I doubt Lee knew how much frustration and self-loathing he was negating when he sent me this card.

I went to a card show not long after 2019 High Numbers came out. Quite a few dealers had the stuff in droves -- seriously, I saw four or five copies of just about every card in the set that day...except this Kimbrel. Not a single one in the entire place. I even asked vendors specifically if they had it (which I almost never do). Nope.

The only conclusion I could draw is that someone went to each table before me and, for whatever reason, bought up every last copy of it (seriously, why?). It took a while, but here it is, the elusive Kimbrel. This is, selfishly, the kind of thing that makes me thankful I have a blog (people send me cards I want!). But on a grander level, it's just as joyous to see people once in the shadows deciding to start blogs of their own, putting their thoughts and collections out there for all of us to read.

If any of you glorious readers out there are on the fence about starting a blog of your own, take it from me and start one: you'll be glad you did.
Posted by Nick at 6:04 PM

I can totally relate to you. I went from not knowing what blog was to finding this one, which led me to many others. I was so interested by this community of people who love cards like I do and so, a couple months ago, I decided to start my own blog. I'm so glad I did, especially once people started reading it about a week ago. I'd appreciate support. Thanks!

Those Opening Day parallels are stunning! Just the right colors.

I agree with Trevor... those parallels!
"I'm all about randomness but man is it pleasing to delete want list stuff." Yeah, I love the randomness of a package, too, but finishing off a want list is prime stuff!

That Ichiro is GREAT!!

Great post! Gotta love the generosity and thoughtfulness of the hobby community. It's also good to see new blogs/bloggers to help grow the community.

Thank you Nick. You blog was the first baseball card blog I ever stumbled upon a couple of years ago. Like you, I have no collector friends anywhere around my part of the world, so the blogosphere helps to fill that void. I got quite a few bloggers I still got to send packages out to. My desk always has piles of cardboard with sticky notes attached to them with the names of the soon to be owners.

I hope Mr. Haverkamp and Mr. Hoyle read this post and are inspired to start blogs. They're always hooking up bloggers with some really unique and cool stuff. I'd love to see them start writing about their own PC's. #fingerscrossed

All my trader friends from the old neighborhood moved away or stopped collecting (mostly both). I did find a trading group on Yahoo! when I started up again, but I've had much more activity with bloggers in the last few years. I make a conscious effort to get back to trading with the group when I can, but just can't sustain the level that I do with bloggers. Soon I will be posting piles of trade bait that everyone can look at, so it should help both.

While you may not remember the exact point at which you decided to blog, I sure am glad you did. Keep up the good work.

you certainly have an audience here, Nick! your blog was the second I found one day during an afternoon wait in a jury pool, seven, maybe eight years ago. I looked up info on some random baseball card, can't even recall who or what, but there it was - all written up on your blog. I sat there all afternoon, reading post upon post. I discovered Frankensets here. Your enthusiasm and knowledge of the game and hobby are contagious. Thank you for spreading it all 'round the community!