COMC and my collecting universe 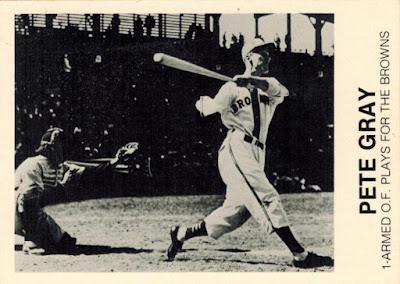 As a collector, I'm forced to live with the knowledge that there's a whole universe of baseball cards I need floating out there, most of which I'll never own in this lifetime.

Barring some greatly unforeseen circumstance, I'll never own a Goudey Ruth. I'll never own a T206 Cobb. That's saying nothing of the seemingly infinite number of cards I need that I don't even know about yet. This is part of what you sign up for as a collector: in order to collect, there have to be cards you need. As a collector for life I've submitted to this lifelong chase.

I don't give much mind to T206 Cobbs and the like, because have you seen my bank account? Pipe dreams are fun, but in reality they're the most distant bodies in my universe. They're so far out there, so tiny through the telescope, that they're almost impossible to fathom. No, I think the most frustrating examples are those cards that I know exist, perhaps have even seen a few times: those cards that are always just out of my reach, just a bit more expensive than I can realistically swallow. The Pete Gray you see above was one of those.

Coming from the scarce final year (1984) of the brilliant Renata Galasso series, I'd seen a decent number of copies floating around the internet over the years, all priced at around $15-20, which (since I'm a cheapskate) is just a bit more than I can convince myself to pay...and thus just a bit more annoying. 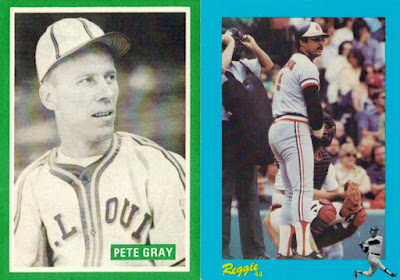 I've been using COMC for a few years now (to appropriate a not-so-hyperbolic drug term), and even amidst all the randomness, I'm forever thankful for its help in reeling some of those nearby members of my collecting universe. But honestly I didn't think that Pete Gray card would be one of them until a copy inexplicably popped up not long ago for a hair over five dollars. Still a decent chunk of change for me to spend, sure, but given past experience I didn't wait. BUY NOW. The feeling of finally tracking down such an admired card from the universe is tough to describe: something like joy and vindication rolled into one.

But it was far from the only star captured by this most recent COMC order -- in addition to a rare Oriole Reggie sighting I've long wanted, this order somehow managed to secure a second Pete Gray from my collecting universe with that Fritsch One Year Wonders oddball, which some almighty dealer marked down to two bucks for some reason (the next cheapest one on COMC is currently priced at $15). 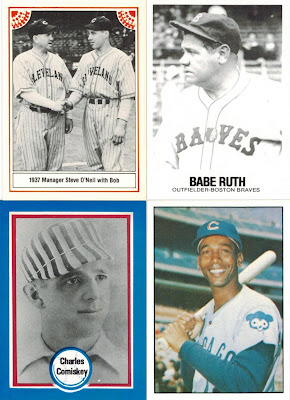 But I don't mean to imply that having this universe orbiting around me every day is really all that aggravating or detrimental to collecting in the first place: I would've given up collecting a long time ago if I thought so.

There's a certain relief in resigning to the knowledge that there will always be Stuff I Want out there -- it keeps my collecting universe a happy place, and adds all the more joy to those precious moments when I actually find something I need. 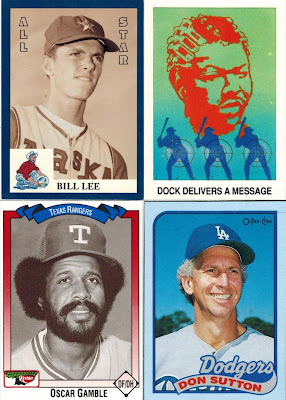 One reason I love COMC is that it brings together cards I knew I needed and cards I didn't know I needed.

The Gamble and Sutton belong to the former -- the Gamble is the only card I've ever seen that depicts his brief half-season with the Rangers (though it's not the only short term stop I'm chasing from that set), and the Sutton box bottom is the only time Topps (and/or OPC) featured his brief and forgettable return to the Dodgers at the tail end of his HOF career.

But on the other end of the spectrum, I had no idea Bill Lee played minor league ball in Alaska, nor did I know there was a card of Dock Ellis (in curlers!) that discusses the time he singlehandedly tried to maim the entire Cincinnati Reds ballclub. 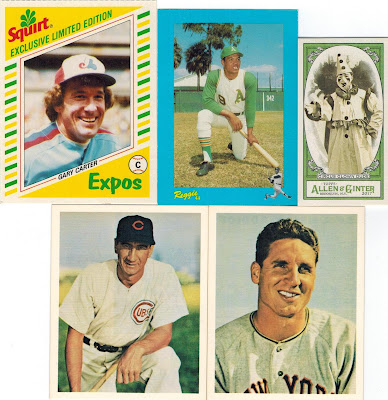 Not all the members of my universe are large celestial bodies: some are minis (apparently that Reggie set was issued in both full-size and mini form). 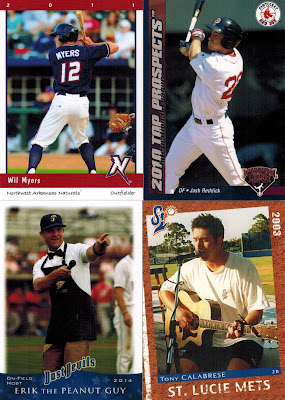 Sometimes my collecting universe collides with others -- as was the case with the minor league rabbit hole I got sucked into after reading a recent NOC post.

I'd somehow never thought to look for minor league cards on COMC before, and while there's a good amount of searching and sifting involved, it turned out to be very rewarding in the end (a dude playing guitar! ERIK THE PEANUT GUY!). 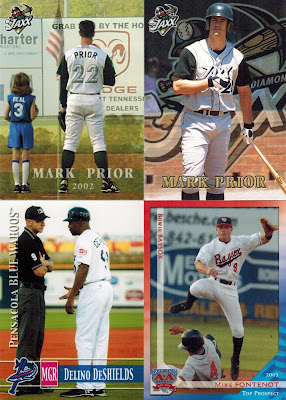 Minor league mini-collection hits -- including a double dip of Mike Fontenot, perhaps my favorite Obscure Cub ever (seriously, I have a Fontenot jersey hanging in my closet right now). 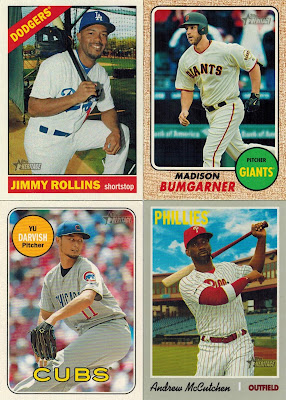 I've sometimes wonder if Heritage short-prints are actually that short-printed at all, and for better or worse this order furthered that suspicion.

Even supposedly scarce action SPs (like the Bumgarner and Darvish) were only 75 cents to a buck, and some regular SPs went as low as 40-50 cents a piece, cheaper than a lot of the base cards listed -- so can you blame me for wondering if this whole short-printing thing is all a scam? 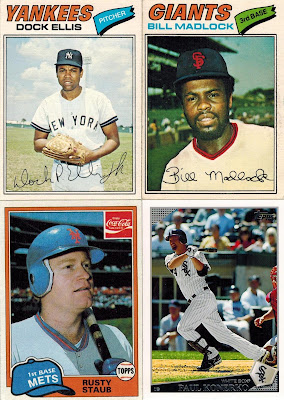 There are alternate universes within my collecting universe.

Literally: I've recently started targeting "alternate universe" cards -- that is, cards using a standard Topps design that feature a different photo than the one used on that year's Topps issue. Often times it's due to a guy changing teams (like the OPC Madlock and Coca-Cola Staub). Other times, like the Konerko, it's when Topps is nice enough to change things up between the regular Flagship photo and the one used for team sets.

But as for the Ellis (also an OPC), I have no idea why it exists as an "alternate universe" card: Dock didn't change teams that year, but for whatever reason Topps decided to feature two different Yankee photos of him between their Topps and OPC sets. 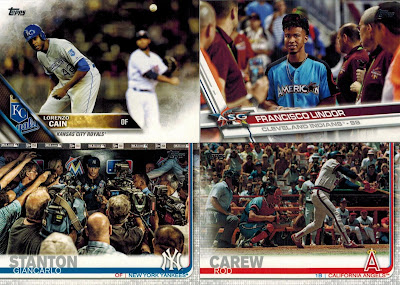 I have somewhat of a begrudging respect for photo-variations -- they don't really need to exist but they're cool as head-turning, needle-on-a-record moments that make you stop and stare. 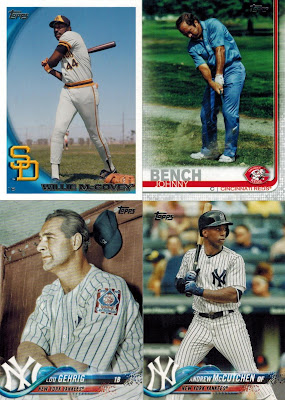 More terrific photo SPs, though that Bench easily steals the show, I think. 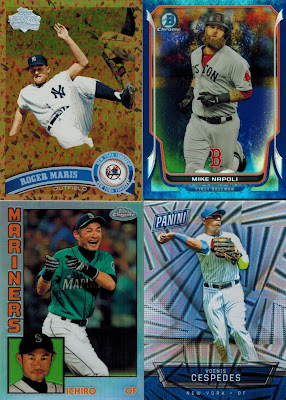 Liquorfractors, bubble refractors, and other generally shiny stuff that threaten to make my scanner blow up. 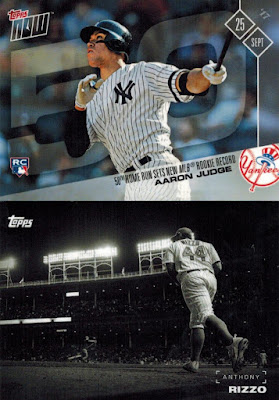 A good chunk of the time I spend on COMC goes toward getting online exclusives on the cheap -- somehow that Topps Now Judge was only a buck, and holy hell is that Rizzo fantastic. 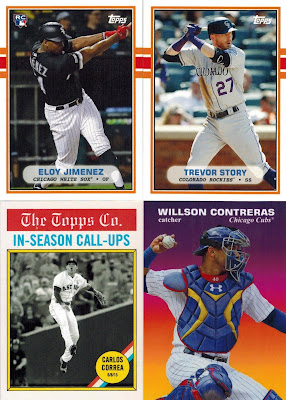 I'm thankful for COMC because it allows me to sample things from my collecting universe that I'd otherwise never be able to see -- these Throwback Thursdays are a prime example. 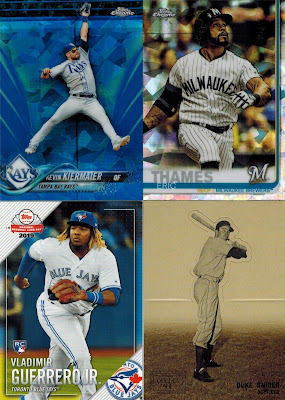 Pulled the trigger on a few online-only (I think) Sapphire Cromes with this order, though I'm mighty disappointed Topps didn't continue the blue theme in the 2019 edition.

Neither my dad nor myself were able to make it to a card shop on the day those Vlad Jr.'s were being passed out, but thanks to overproduction (yay!) I landed a copy on COMC for a whopping 75 cents. 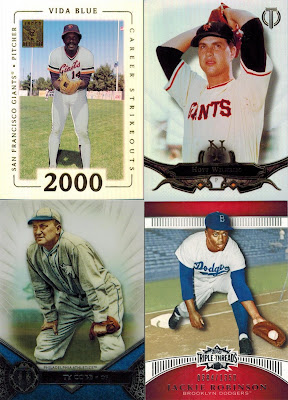 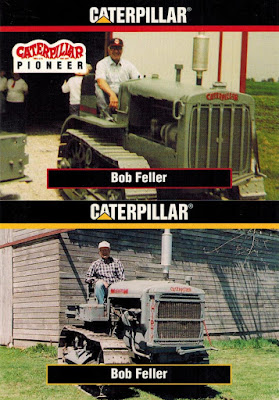 And now for something completely different: Bob Feller and his tractors. 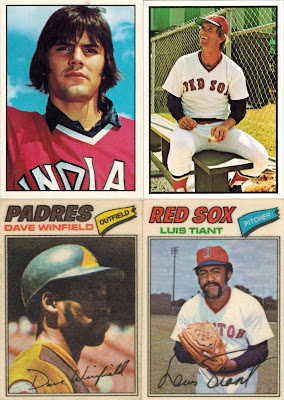 Vintage oddballs manage to sneak their way into every COMC order -- I can't believe I didn't think to search for those '77 cloth stickers until now.

It's hard to outdo a SSPC Bill Lee (from the '78 set), but I think that Eckersley rookie may have done it -- it was on my "Keep Dreaming" list, after all...until now. 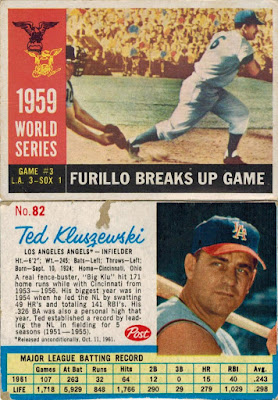 More excellent vintage, including another "Keep Dreaming" want with the Kluszewski -- it's his only true sunset card and a rare shot of him with the (expansion) Angels. 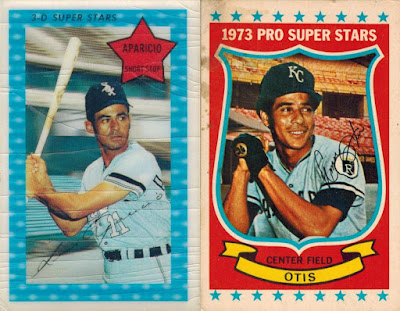 Kellogg's are the shooting stars of my collecting universe -- they just make you stop and go wow. 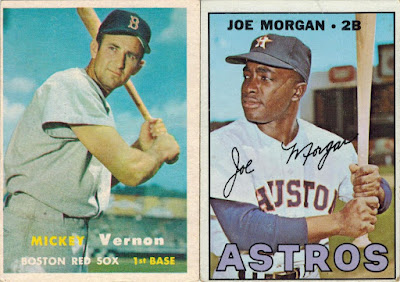 A couple basic Topps vintage cards I somehow didn't already own -- I love early Joe Morgan stuff, and that '57 Vernon is my first one of him on the Red Sox. 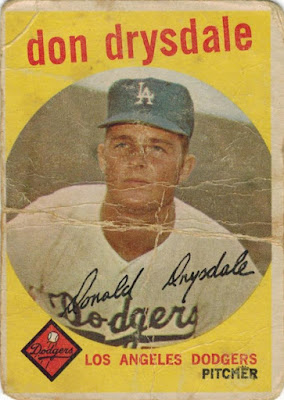 While the Galasso Gray was the most expensive card of this trip around COMC, I consider this weathered '59 Drysdale the real "splurge" of the order since, unlike the long-desired Gray, it was more of an impulse buy than anything.

When buying vintage on COMC, I mainly look out for off-condition suspects that are way cheaper than the next cheapest copy of that card -- the $3 and change I paid for this decimated Drysdale (now my oldest card of his) was about half the cost of the next cheapest one. Not a bad mega-vintage way to cap off this latest order, I think.

They say our universe is always expanding, and given the effect COMC has had on my own personal collecting universe over the years, I certainly know the feeling.
Posted by Nick at 5:30 PM

In the ven diagram of your and my collections, we intersect where it says "1970s oddballs," "vintage," and "different photos on familiar designs."

Others just leave me confused: how does one search for ballpark vendor cards on COMC? Type in "peanut guy"?

Awesome stuff! I've been getting cards from COMC once a month since Nov. 2017. I'm still waiting for my December 2nd, 2019 order to ship, so my streak might be coming to an end. I love browsing COMC for new to me stuff.

Oh man. Nice order from comc! I have really come to appreciate odd-ball cards over the years. I also find comc a great place to find low-grade vintage stars for really cheap.

Galassos are amazing! How did she know we'd be scooping these up decades later? I'm afraid to spend much time on COMC. It's much too easy to add money to paypal and click away. However, an exception could be made for vintage. I don't know why this never occurred to me. I like to handle old cardboard before purchasing. Looks like I need to get over that!

This may not be a popular opinion--I like overproduction! Don't tell anyone, thanks.

It seems like half of the cards in this post (at least at the beginning of this post) were stuff I had no idea existed. I had to look up the Dock vs. the Reds story. That's crazy. I wish there was video out there of that game.