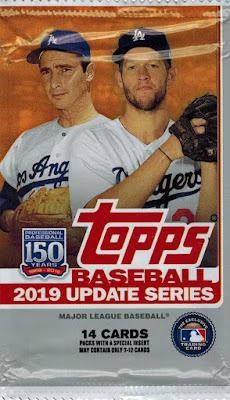 There are certain things in my life that I can't help be irrational about.

A few random examples that come to mind: I refuse to hear a bad word about The Beatles, Seinfeld, or peanut butter. Yet I've come across people who actively dislike these things, and my only reaction is simply...how?! I mean, how could anyone on earth not like The Beatles? People may have their reasons, and they might even be somewhat logical, but good luck trying to convince me.

For a long time, I was like that with Topps Update. It was my favorite release of the year, and I'd defend it to the death whenever someone spoke ill of it. I think a lot of this comes from the fact that Update was probably the set that got me back into baseball cards around 2006-07 -- I've bought a box of the stuff almost yearly since then. I loved the All-Stars, I loved the guys on new teams, I simply love the way it chronicled the story of each passing year.

To me, Topps Update always felt like a happy consolation to the inevitably gloomy end of every baseball season -- and for that reason, I didn't want to hear anything bad about it. 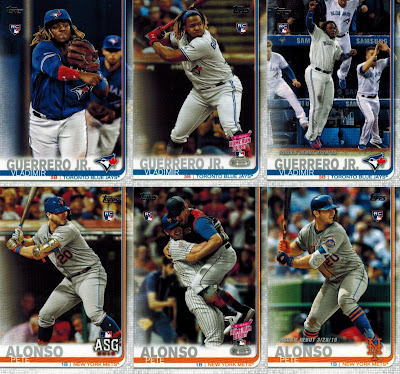 But while it pains me to say it, I've become somewhat disillusioned with Update over the last few years.

I'm still a fan, and I still look forward to the day it hits the shelves, as it once again did a couple weeks ago. I don't see that ever changing. Unlike the tradition of years past, however, I didn't buy a box this time...because they were going for over $100 last I checked, mostly thanks to people keeling over from all the rookies (my box of 2018 Update cost about $60). What's worse is that -- stop me if you've heard this before -- Topps seems to cater to the cash-hungry masses at the expense of actually living up to the set's name.

It's called TOPPS UPDATE, and so the question should be asked: are three cards each of Vlad Jr. and Pete Alonso truly updating me? Nope, nope, and nope. 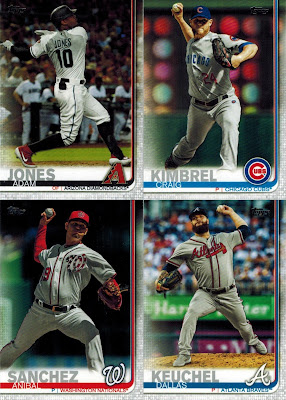 Update should not be a set littered with filler: there are more than enough big-leaguers who have changed teams or simply missed inclusion in Series 1 or 2 to fill Update's checklist.

And while 2019 Update does indeed feature some precious Dudes in New Uniforms -- really the main reason I still salivate over the set -- one wonders about the forever forgotten guys who got the shaft because of the need(?) to throw three Pete Alonso cards at us. 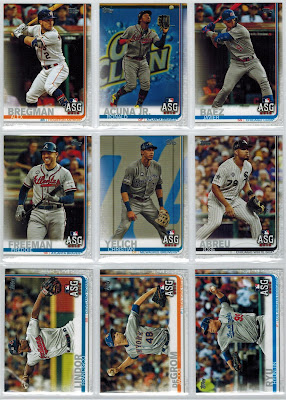 The All-Star cards were once exciting, and not that long ago, but they seem to have lapsed back into standard hitting, pitching, and general standing around images that don't stand out in any way from the other cards in the set. 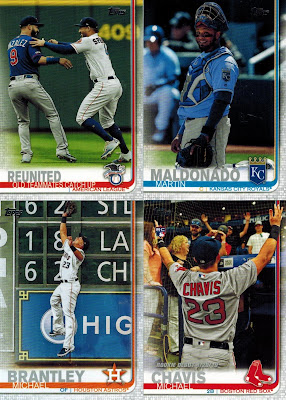 But the irrational part of me comes back to life when I see the greatness Update is capable of producing -- don't you dare talk bad about my Update! 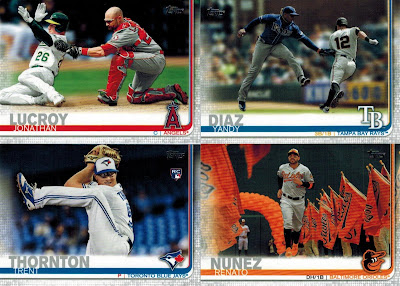 Not a bad word about these magnificent cards!

Still, when I take off my Update rose-colored glasses, I can't help but see some flaws. We've already mentioned the rookie filler fiasco, but what's with the weird blurriness going on with some of the action shots? And why is Jonathan Lucroy still shown as an Angel in a set called Update...if he actually finished the season with the Cubs?

There I go again, thinking rationally. 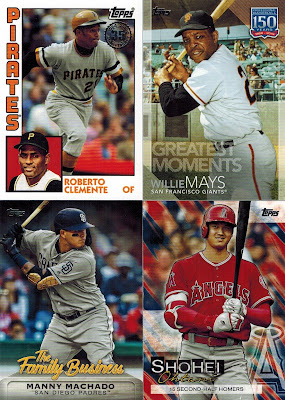 I don't buy Update for the inserts, but I figured they're worth scanning (especially the Clemente!). 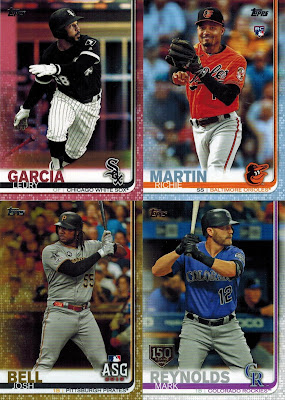 Had some parallel luck with the limited amount of retail Update I bought (a blaster and a few rack packs) -- including some help from the cardboard gods for my new Josh Bell collection. 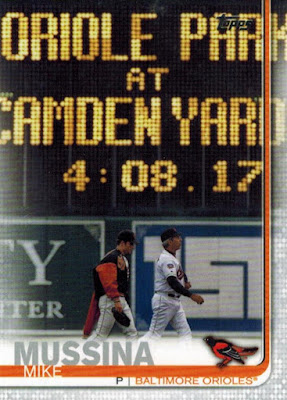 And hey, I was even lucky enough to pull a helluva nice photo variation here!

But after all this, I'm left feeling somewhat empty with Update. I still like it, and had fun ripping the packs. It's still an okay set. But it just doesn't feel like it once was to me, that cap on the end of the baseball season. The only way I can think of to describe it is like having someone scratch out the last sentence of a good book. Maybe I'm just getting older, and losing that sheen of sacredness certain baseball cards once had. Or maybe Topps Update really is just getting crappier. Maybe both.

Maybe those seeds of irrationality are simply falling away -- and maybe that's not such a bad thing, because maybe now I can see the good with the bad in Topps Update, the joys with the flaws.
Posted by Nick at 5:30 PM

As much fun as it is ripping wax. I've resorted to buying the complete set on Ebay the last several years. This year was the 1st time I couldn't get a set for $25.00, it cost me $37.50 delivered.

Whatever the flaws,still so many great shots you've got there!

I can sort of understand people not liking "Seinfeld" just because humor is so subjective and also so connected to a particular era. But those who criticize should be aware they would be absolute outcasts between, oh, 1992-1998.

The "I don't like the Beatles" stuff I don't get at all. Yeah, sure, it may be "old music," but they are in just about every song created for the next 40 years. Save your derision for someone eons less influential.

As for Update: it's been bloated for years. Wish it could go back to the '80s version. Unrealistic I know. But if people can say the Beatles are overrated, I can say that.

Sorry - I spoke I'll of Update shortly after this went to press. Oopsy.

But honestly, you've perfectly hit upon the disillusionment that I too feel about it - it simply isn't living up to the name these days!

Topps seems to cater to the cash-hungry masses at the expense of actually living up to the set's name.

This is why I won't be getting a box this year. The pre-sale price was a joke. They are just trying to ride off of the rookie hype. I wouldn't be surprised if this stuff goes way down this winter.

My kids just bought a hanger each of this and asked why I wasn't interested. So I told them. I love the IDEA of update but the fact that Topps puts it into production before the trade deadline closes pretty much ruins it. If Update was just cards of guys who either didn't make it into S1/2 (rookies OR vets) plus cards of guys who changed teams before the trade deadline closed I'd love it.

Dump the Home Run Derby Cards. Take the All Stars, Rookie Debuts, and Highlights and release a separate set of those in January of ALL rookie debuts, All Stars, and a complete season plus post season worth of highlights as a summary of what happened the previous summer.

"Not liking The Beatles is as perverse as not liking the sun." -- The Rolling Stone Record Guide

I don't know why Topps doesn't just do a Series 3 at this time, and then later do a smaller Update with players who have been traded up to the deadline.

That Mussina photo variation is pretty cool. As for Update, I can't say I'm a huge fan... but dang it's become one popular product for Topps.

I'm trying to work my current state of dismay into a post, but I'll summarize part of it here: In trying to streamline my collection, I'm starting to reconsider cards which would've been automatic wants just a couple of months ago. I look at those Pete Alonso cards and think "Just within these three cards, do I really need the All-Star card *and* the Rookie Debut card when the photos are so similar?" (For those who don't know me, I've been a Mets fan and collector for 45 years).

With that said, I definitely need that Renato Nunez card (which, I'm sure everybody can figure out, was taken at the home opener).

I agree with Brett. I think eventually Topps may discontinue the Update Series and just add a 3rd (possibly even a 4th) series throughout the year.