Into the Sunset: The NL East Team 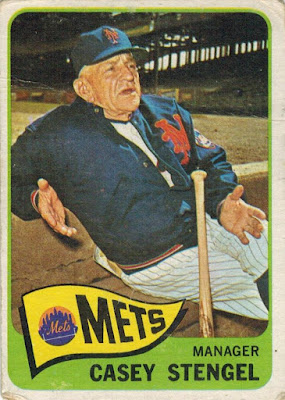 Looking at the nuts and bolts of it, I think I care less about the NL East than any other division in baseball.

I'm almost perfectly neutral about the Braves, Phillies, and Marlins -- though the Braves have started to win me over in recent years with their likable young stars. I was once a big Nationals fan, but I'm little more than moderately interested in them now because of how many times they screwed me over when I pegged them to win the World Series in the past. If I had to pick a favorite team in the division, it's gotta be the Mets. A lot of dudes I like from the past (Seaver, etc.) and present (Syndergaard, etc.) have played for them, and they've got the underdog thing going for them since they're in the shadow of the crosstown Yankees.

As expected, however, my overall apathy towards the franchises in the division has no effect on the quality of their Sunset Team, because this roster fields a scary lineup of guys who finished their careers in the NL East. 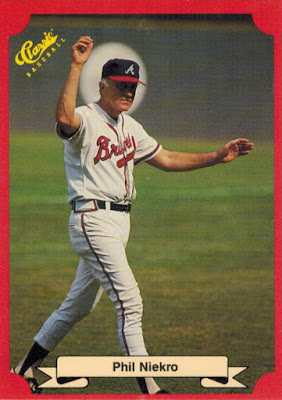 Maybe there's something special about the NL East I'm missing, because, as I found writing this post, a lot of guys' careers were like revolving doors that began and ended in the division.

Phil Niekro spent the majority of his Hall of Fame as a Brave (debuting in 1964 when the team was still in Milwaukee) before joining the Yankees and Indians in the late stages of his baseball life. He'd go on to accomplish the rare feat of playing for three teams in his sunset season -- after fizzling out with the Indians and Blue Jays in 1987, the Braves brought "Knucksie" back for one last homecoming start with them on September 27 of that year.

Niekro gave up five runs in three innings for a no-decision against the Giants, an otherwise pedestrian line until you account for the fact that it was the last game the great knuckleballer would ever pitch in the big leagues, of course. 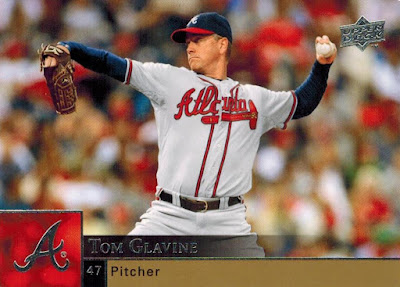 Tom Glavine, another Hall of Famer, spent his entire career in the NL East.

Like Niekro, he started with and spent the vast majority of his time in the big leagues with the Braves, leaving only for a somewhat forgotten five-year stint with the Mets between 2003-07. Also like Niekro, Glavine returned to the Braves for one last go-around in his final season.

Though just a shell of his former self -- he collected the final two of his 305 career wins with a high 5.54 ERA -- it was still a fine end to one of the better pitching careers I've witnessed in my baseball lifetime. 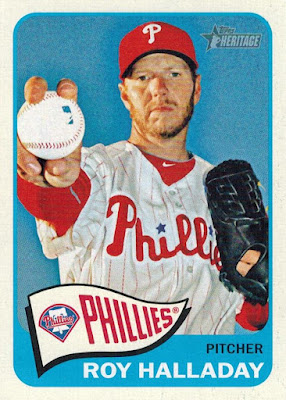 The late Roy Halladay is the rare example of a guy who I remember more with a team he didn't play all that long for.

Just four of Halladay's 16 big-league seasons were spent in Philadelphia (he was a Blue Jay for the other 12), but he's embedded in my brain as a Phillie for some reason. I think it's because he had more "moments" as a Phillie (his postseason no-hitter, his perfect game, etc.). It's certainly not because of his farewell season, which saw "Doc" limp into the sunset with a 6.82 ERA in 13 games with the 2013 Phils.

Either way, when I think of Roy Halladay, I think of him in red pinstripes. 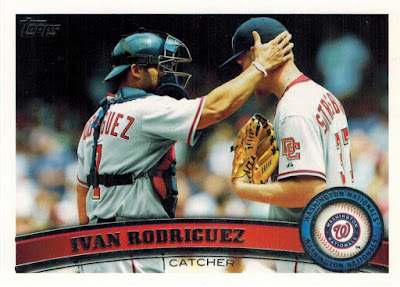 For better or worse, Ivan Rodriguez's sunset image came at a time when Topps was trying to feature a young prospect named Stephen Strasburg on every single card they produced.

Though Stras-mania got tiring pretty quickly, this card...actually isn't bad. I've always liked the "passing of the torch" feeling of it, with the grizzled veteran encouraging the hotshot prospect. As far as numbers go, Rodriguez's ride into the sunset wasn't much to write home about: he hit just .218 with two homers in 44 games for the 2011 Nationals, and retired shortly after the season.

Pudge is still one of the greatest catchers ever, and he has a plaque in Cooperstown, but he'll forever be sharing the spotlight on what turned out to be his sunset card. 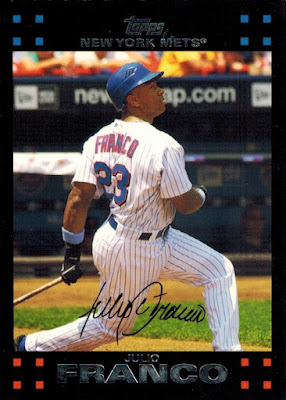 Julio Franco is the first non-HOFer on this roster, but he still might be the single most interesting dude here because his sunset season came when he was 49 years old.

Franco was a terrific player for a long time -- a three-time All-Star with a career .298/.365/.417 line -- but he's remembered by most fans for playing well into his fatherly (almost grandfatherly) years. After 23 big-league seasons (as well as a few others in Japan, Korea, and Mexico), Franco played for both the Mets and Braves in 2007, his age-49 season. He actually finished as a Brave, but as far as I know no cards have been produced of that tenure, so this 2007 Topps single of him as a Met goes down as his sunset issue.

Considering the dude was 49 at the time, hitting .222 with one home run and 16 RBI seems worthy of an MVP vote to me. 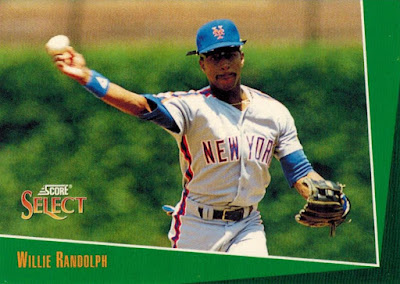 Though the majority of his career was spent with the rival Yankees, Willie Randolph finished his career as a Met in 1992.

There's not much to note about Randolph's sunset season except for the fact that it seems a lot more noteworthy in hindsight since he'd go on to manage the Mets about a decade later. 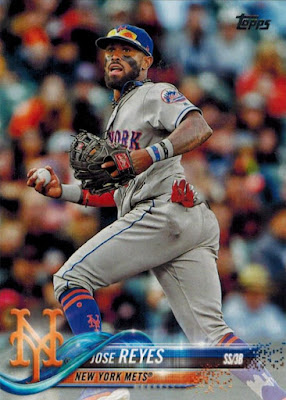 I was once a big fan of Jose Reyes, but it's funny what a domestic violence suspension can do to your opinion of a guy.

Still, Reyes is the most qualified shortstop for the shortstop spot on this squad since he was, at one time, one of the most young exciting players in the game. But at some point around 2015 his career fell off a cliff: he was a negative-WAR player in his final years, and he hit a paltry .189 in 110 games during a second stint with the Mets in 2018.

Not surprisingly, that was the last we'd ever see of Jose Reyes. 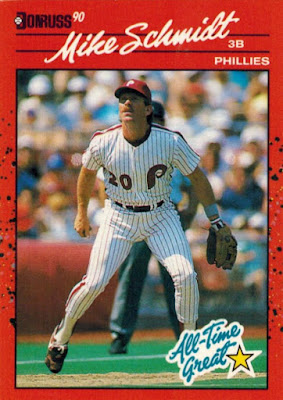 Really the only nice thing I can say about 1990 Donruss is that it gave Mike Schmidt a true sunset card.

Schmidt retired in the middle of the '89 season, which led most companies to omit him from their 1990 checklists. I credit Donruss for producing this one, however -- if you can ignore the design, it's actually a darn fine finale. While his sunset season was a dud, Mike Schmidt is still the greatest third baseman ever for my money.

The NL East is packed with prospective stars for the hot corner -- David Wright and Chipper Jones come to mind -- but Schmidt's spot was never in much doubt. 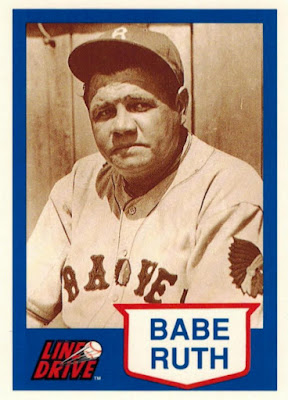 I'm trying not to showcase too many Short Term Stops on these rosters since I've already devoted a whole theme to them in the past, but some are simply too legendary to ignore.

Case in point: Babe Ruth...as a Brave?! Seeing the once-great Bambino in a Boston Braves uniform will always seem like something out of a surrealistic painting to me, but fact is it happened. (In)famously, the 40-year-old Ruth managed just a .181 average in 28 games during his swan song with the '35 Braves, hitting the final six of his 714 career homers in the process.

Short Term Stop or not, this roster just wouldn't be complete without The Babe. 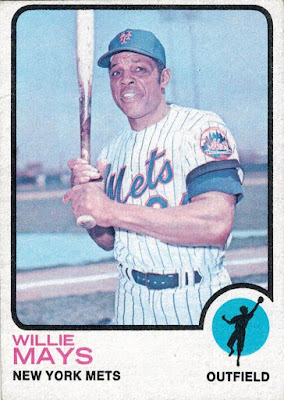 Though Willie Mays as a Met isn't technically a Short Term Stop -- he spent two seasons with them -- the sight of him in the uniform is as unfamiliar as they come, and well worthy of a spot on this Sunset Team as well.

Like Ruth, Willie Mays was an all-time great who played a bit longer than he probably should have. His final-season numbers are almost physically painful to look at considering the stats he put up during his legendary years with the Giants -- nevertheless, they'll always show up on the back of the baseball card.

Mays has kind of a curious sunset gallery as well: he appears on a '74 Topps World Series highlight card, but isn't in the regular set -- all things considered, I consider this '73 Topps single to be his true finale. 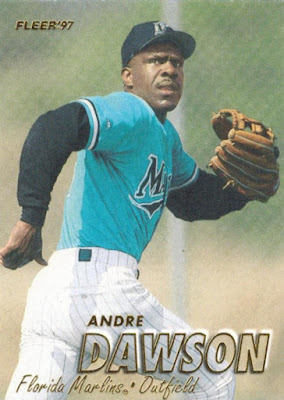 The Marlins haven't been much of a factor in the sunset department over the years, but they have at least one big name to their credit with Andre Dawson here.

Dawson is like Willie Mays, in that his stint with the Marlins (two seasons) isn't a Short Term Stop, yet remains incredibly odd to see. His .276 sunset-season batting average actually leads this team, which should say something about sunset seasons. The other numbers, however, are fairly dull: the final two of Dawson's 438 career homers came during his '96 swan song, but his time with the Marlins will never be mistaken for a focal point on his Hall of Fame plaque.

And so that just about does it for this Sunset Team -- thanks for tuning in!
Posted by Nick at 6:30 PM

Niekro, Glavine, The Babe, throw in Stengel and Franco. 5 Braves, love it.

Killer team Nick! Julio Franco is the man, I love acquiring cards of his simply because he lasted so long at the most elite level. Great stuff!

Not sure I knew about Pudge playing in the Nation's capitol. If I did... I forgot. And I agree with you... seeing Ruth with the Braves (and Mays with the Mets) is just weird.

I also associate Halladay more with the Phillies than the Blue Jays. Even though he wasn't there for all that long, he was a vital part of the 2010 and 2011 Phillies teams and won a Cy Young while he was there.