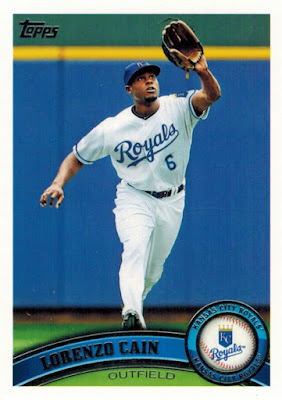 Right now I'm sitting here in my quiet room, typing this post, knowing the National is going on not fifteen minutes from where I live.

As a responsible adult (or so I like to tell myself) living on a small paycheck, I just couldn't justify being there. But that doesn't mean it's not kinda painful. I've second-guessed my decision not to go about twenty times already. I came into a bit of money at the beginning of the month, and chose to take that money to the smaller hotel show because, a) my card show itch was at peak level, and b) hotel shows are simply better for the way I collect. Still, I didn't mean to make it seem like I'm anti-National -- on the contrary, I believe everyone should see its magic at least once in their life, if possible, because there's no place like it anywhere on planet earth.

But it's always around National Time that I'm forced to reflect on where I really believe I belong in the totem pole of this hobby. Or, the more pressing question: Do I belong at all? I collect cards, of course, but I don't consider myself a quote-unquote Card Collector. Picture a Card Collector. You and I are probably picturing the same thing. Men in cargo shorts and sports jerseys and backpacks. Men who admire people like Gary Vee. Men for whom personal space isn't exactly a prime concern. Men.

Card Collectors are basically all I see at the National, which at least partially explains why it sometimes feels so claustrophobic to me, a socially-anxious person who hates shorts, book-writing entrepreneurs, and personal-space infringements. 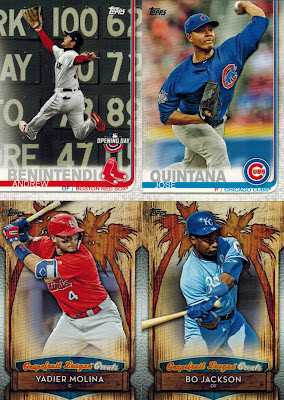 I've lived my entire collecting life knowing that Card Collectors, and not myself, are the market for the National, the industry, the product, basically 98 percent of every facet of this hobby. But I can honestly say that starting this blog, and finding those other beautiful souls in the remaining two-percent who do things like write blogs and buy creased vintage and rip packs for the base cards (gasp!), has been more rewarding than I could ever put into words. I mean this.

It makes the sting of not being at the National -- but also the joy of knowing that not all people who collect cards are Card Collectors -- a little more palatable. 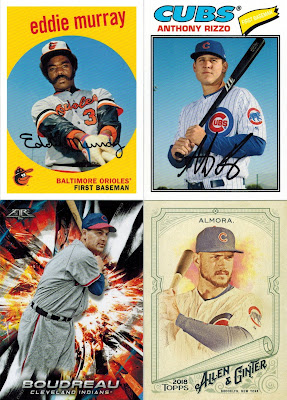 This is all just a very long-winded way of leading into a trade post, because everything you've seen so far came from a package I received from GCRL, author of the excellent "cards as i see them" blog and a longtime friend of Dime Boxedonia.

In addition to a fine smattering of 2018-19 wants came the Lorenzo Cain at the top of this post, a former Dime Box Dozen need and a boring old base card that wouldn't be on anyone's radar in the long lines to PSA booths and case breaks at the National. 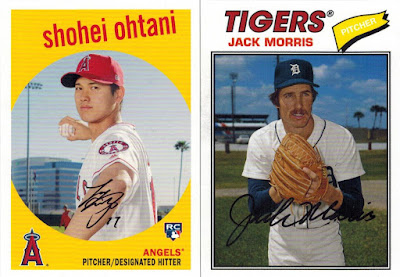 These two 2018 Archives came courtesy of a PWE from Gavin, whom you probably know as the mind behind "Baseball Card Breakdown" -- I didn't realize at the time that they were the last two cards I needed from the set.

The Morris is a neat "Card That Never Was" (he debuted in 1977 but didn't get a card till '78) and I rarely hear Ohtani's name mentioned in relation to cards anymore because I guess everyone's moved onto the Next Big Thing by now. 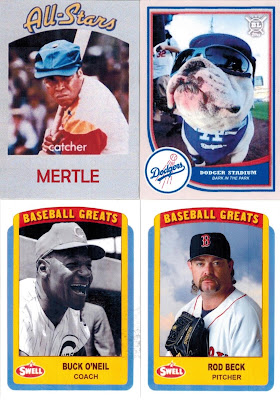 Gavin also included a generous amount of awesome customs that you won't find anywhere within the wide walls of the National -- I'm partial to the Mr. Mertle since Topps inexplicably left him out of last year's Sandlot inserts. 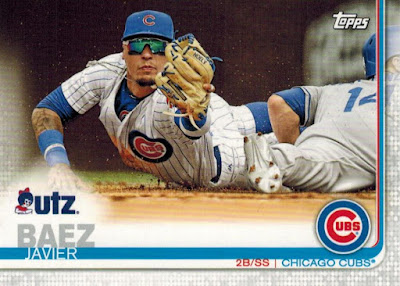 Longtime reader and general Red Sox extraordinaire Mark Hoyle seems to have become my Utz supplier here in the blogosphere. 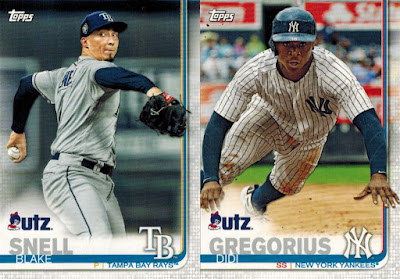 In addition to the Baez came these two Utzes of newer player collection subjects of mine.

Utz is a good example of the different vibes I get between the blogosphere and the general cargo-shorts card industry -- I hear about these all the time on the blogs but hear nary a peep about 'em elsewhere. 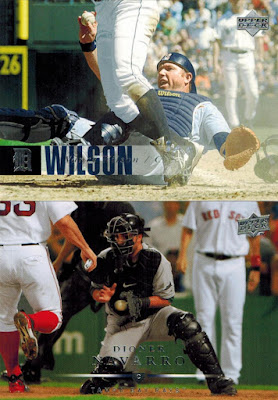 People seem to like the social aspect of the National, but I have to say I haven't made a ton of human contact during my trips there in the past.

I did, however, make a new trading friend here on the blogs, thanks to Dennis of "Too Many Verlanders" fame who reached out and sent me a trade package that included this pair of new plays at the plate. 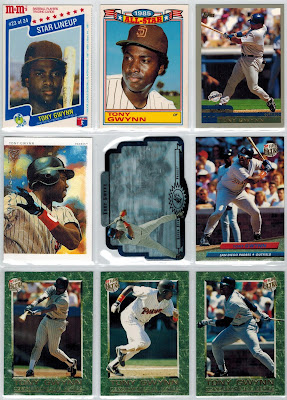 Much of what Dennis sent was comprised of a large stack of Gwynns, many of which I needed -- though my favorite of the bunch had to be that M&M's oddball. 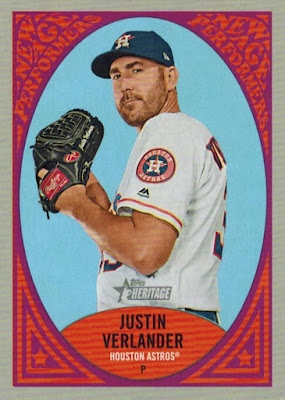 If you went/are at/are going to the National, believe me when I tell you I really, genuinely hope you have fun.

But I just think we have to be honest about the hobby when, time and time again, it's been shown that much of it is stuck in a state of suspended disbelief. The National embodies the good, but also the bad. Seeing pictures of small towns of people waiting in line to have their cards forever graded and protected from actual tactile enjoyment scares me. I understand not everyone goes bananas over dime boxes and creased vintage...but I also don't want to live in a cardboard world where everyone panders to Gary Vee & Co. It's why the National sometimes vaguely reminds me of a dystopian novel.

Because in the end, these are baseball cards we're chasing, glorified pictures, little 2x3 pieces of manufactured cardboard that should never be mistaken for dollar signs.
Posted by Nick at 6:00 PM

Great post,boy...it's the same way with my record collecting (i imagine its the same in ANYTHING collecting) ,some are in it for joy,some in it for bucks or bragging...ignore the "hitz" crowd,rejoice in the crowd that embraces you!

Great post Nick. I had thoughts of going to the National the next time it rolls through Cleveland a few years from now as that would only be about 3 hours from me. I realized though, after reading this, that it probably won't be for me. It'll be a lot of high dollar vendors and collectors looking for the big hit or buying and trading, etc. Not for me. I'll enjoy my little card shows around my area. There is a show that runs twice yearly that's like a mini-version of a National with autograph guests, etc. that runs around here. If I want hullabaloo, I'll go there. For now, I'll enjoy my collection and what fits me and what I like and not worry about high rollers.

Also, I'm still working on the post of the great package you sent me a while back. Also, still working on a return for you in between doing about 70 other things currently. I'll have something out to you soon!

The main things I look forward to for the next National I go to - hopefully 2020 in Atlantic City - is looking at all the big ticket cards I know well yet have never seen in person, checking out the game-worn uniforms and other equipment, and buying things I would never see at a regular show (i.e. Japanese cards). I'm not sure how much I will work on my "regular wantlist" when I go next time.

You had me at cargo shorts, a backpack, and the occasional jersey. But I totally need my personal space. I can't stand it when people shove their way in between people at shows. One of my biggest pet peeves.

As for the National... I'd love to go at least once during my lifetime. But it'll only happen if it comes back to the West Coast. I'm not going to spend hundreds of dollars on flights, hotel, and car rentals. I'd rather use that money to purchase one or two nice cards for my collection.

Those last couple of paragraphs really nail it.

I think I'm missing something on the cargo shorts... I wear them all the time during the summer. Have they gone out of style or something? I find them comfortable and I love the access to all the pockets. I can store my keys, wallet, chapstick, glasses case, cell phone and any number of other things in there. Maybe they were never in style? IDK. I love them and I'm going to wear them. LOL
Also, it wasn't until the last few years that I learned I wasn't in the 98%. I thought the way we collected (which is about as similar as it gets) was the 98%! Most bloggers, which was all who I had contact with, collect in a similar fashion. Enter Twitter and my eyes have been opened. It's a different world out there and I realized I'm not part of the majority like I thought I was. I'm comfortable being in the 2%, I just wish it was more like five or ten percent.
Sorry to ramble. This was a great post!

I knew you were gonna get blowback on the cargo shorts thing,Nick!..haha!

Sorry,folks...I have a thing about never wearing shorts...haven't since I was 7...i guess it rubbed off on my boy a bit,haha!

Fantastic post, Nick. Being a Southsider, I too will pass on The National. Suddenly, I have all these bills piling up to my eyeballs. The $20 entrance fee night not seem like much, but you could buy a pretty nice complete set with that on Ebay if you look hard enough. I reckon I will finally put my 2008 Upper Deck First Edition set in a binder instead of being tempted in Rosemont.

PS - Went through some closets and discovered I actually own a 2003 Donruss complete set. Talk about a rare, forgotten set!

I have a few more UTZ cards for ya. Haven’t been to the National yet. One of these yrs. I do the cargo shorts at work. Have too many pairs of shorts to count. Have them on from early April until Late Oct. sometimes even until a Thanksgiving

I found plenty of singles for my vintage and in between want lists at the National. When people ask me what is on the tables there, I generalize "either vintage or shiny graded mojo".
I stay away from the tables full of slabs. But trust me, there are also places to get dime and quarter singles, as well as those big star cards in as nice a shape as you want and can afford.

I wish I knew you lived that close, I'd have brought you a couple boxes full of empty binders! Maybe in 2021....