Stuck in traffic with Stadium Club

I did something irresponsible the other day: I opened packs of baseball cards while driving.

This, I suppose, sums up my love for Stadium Club in a nutshell. I risked bodily harm for a quick peek at the newest cards. So maybe that's a bit melodramatic: I was actually stuck in traffic at the time, not moving an inch. And I suppose it's not against the law -- there's no such thing as a DWOP (Driving While Opening Packs). But still.

In my defense, I bought five 12-card rack packs of 2019 Stadium Club on the way home from work last weekend, and I'm happy to report that four of those made it home with the packaging still intact. 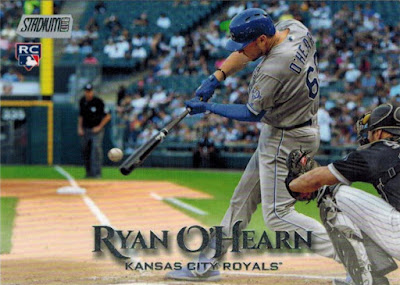 The first of those packs, however, will go down in history as the first (and hopefully last?) cards I've ever shown on this blog that were opened while yours truly was at the wheel of an automobile. 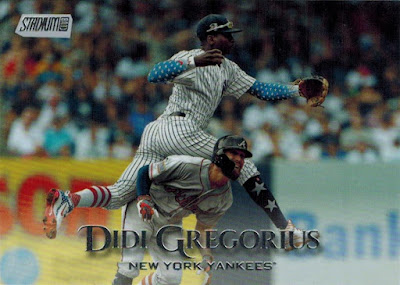 Being stuck in traffic makes for quite possibly the dullest moments in life, so thanks, double-dipping Sir Didi, for supplying some excitement there. 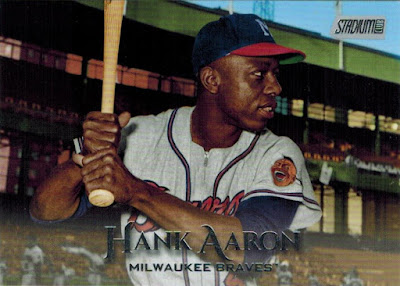 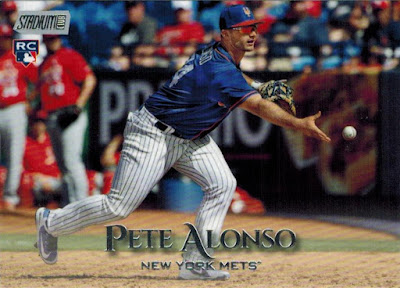 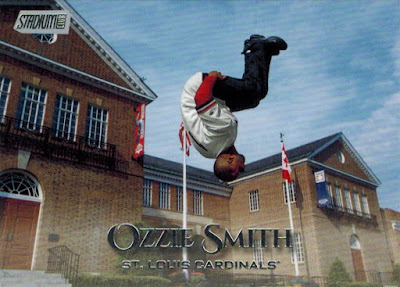 If I would've been driving as I opened this pack, and not merely stuck in traffic, chances are this one would've caused a five-car pileup.

This...this is why Stadium Club remains the perennial Set of the Year -- where else can you find a card of Ozzie Smith doing a backflip...in Cooperstown? 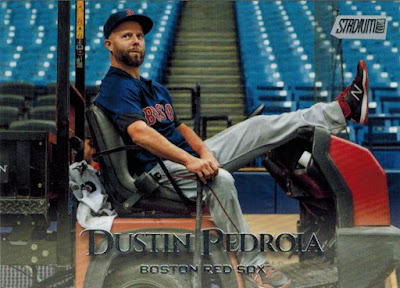 Thankfully, my patience won out and I was able to make it home in time to open the remaining four rack packs within the safety of my room. 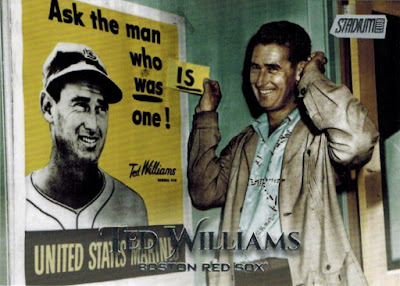 Ted Williams was (is) a legend. 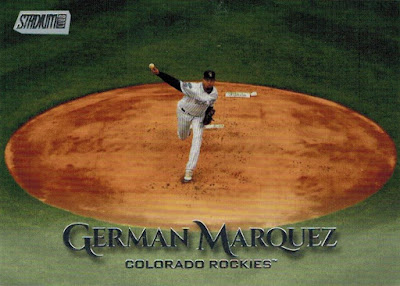 I NORMALLY HATE WHEN PEOPLE TYPE IN ALL-CAPS BUT CARDS LIKE THIS MAKE ME DO IT. 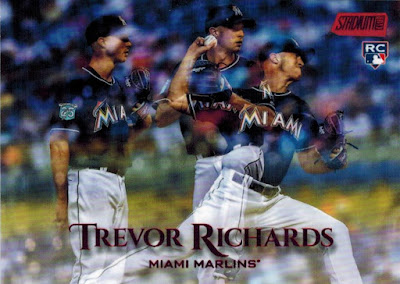 Each of my first two rack packs produced a red foil parallel of a stupid Marlin, but at least this one is a hallowed multiple-exposure card -- as far as I can tell, it's the first produced by a major brand since 2010(!). 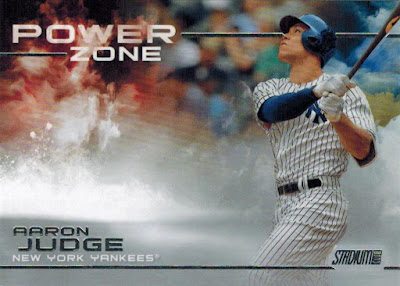 Stadium Club might be the only set where the inserts are the least exciting cards of the pack. 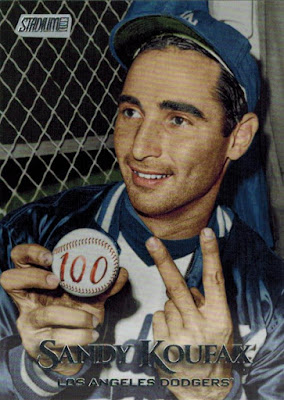 The aforementioned Law of Blogs applies to Sandy Koufax, too. 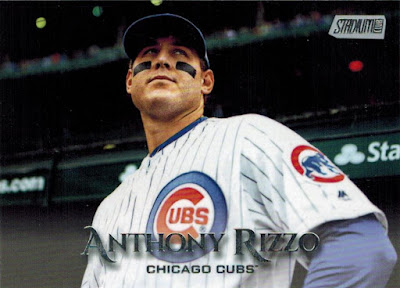 Pack 3 stars with a heroic shot of my hometown dude. 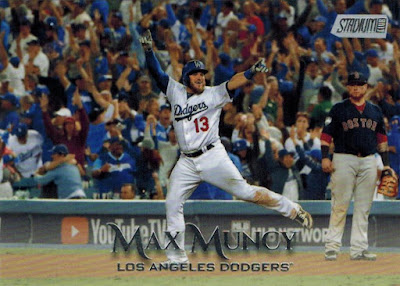 This photo has been used at least once before this year, but I don't care -- use it to your heart's content, Topps, because it's a fantastic moment. 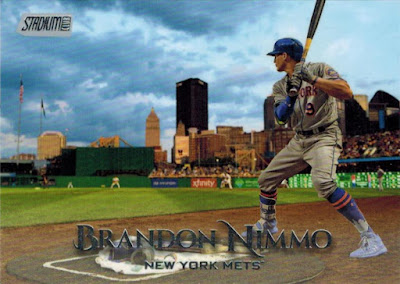 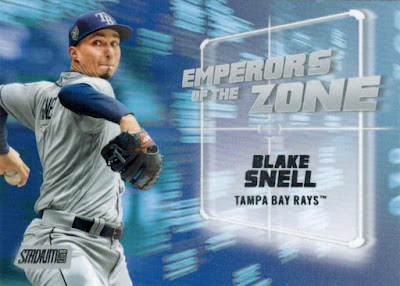 I've recently started collecting Blake Snell because the dude seriously seems to fall out of every single pack I open -- plus this one earns extra points for using the word emperor in the title of an insert set. 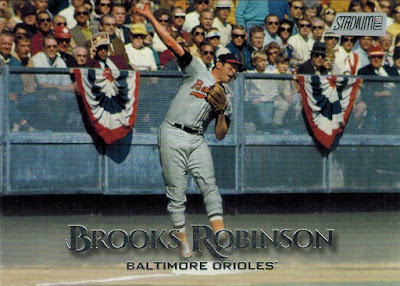 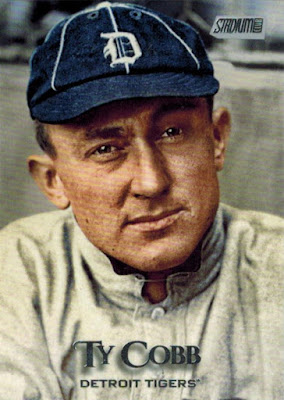 I like when dead-ball stars sneak into Stadium Club. 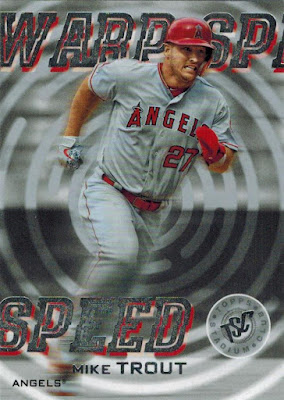 This is probably the first time I can definitively say that I like a Stadium Club insert (dig the '90s-era TSC logo!). 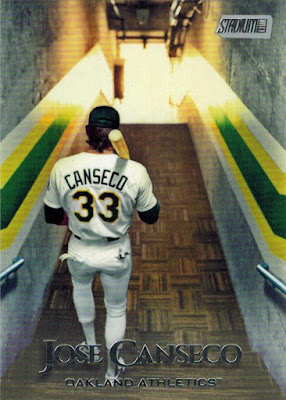 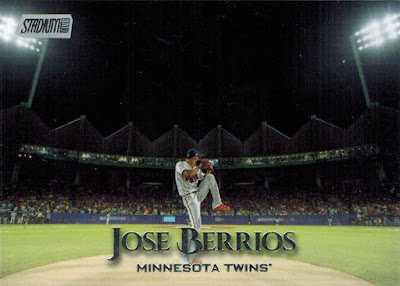 It's almost impossible to pick a single favorite card from all the greatness Stadium Club has to offer, but this one might well be it. 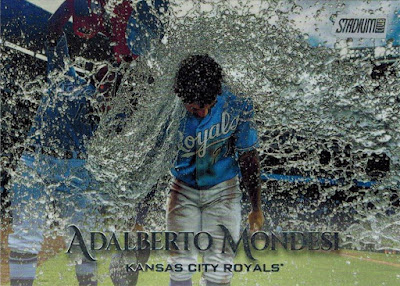 I've never classified Gatorade Showers as an official mini-collection of mine, because I just kinda assume that everyone knows I want these. 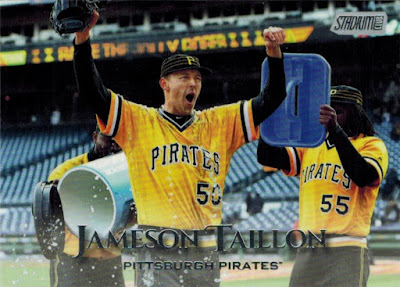 Gatorade Shower hot pack (with a bonus throwback to boot!). 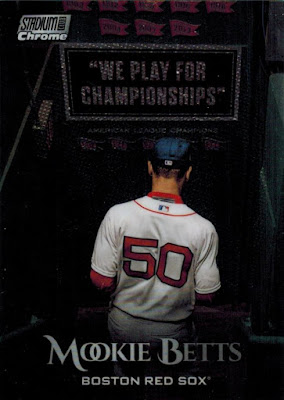 I don't think Stadium Club needs chrome parallels, and for the moment I'm stuck with owning this one without the base version (which I want even more now), but it's still nice surprise to see a gem like this fall out of a pack. 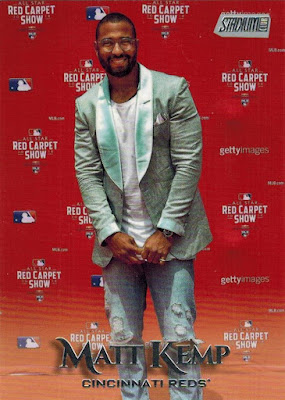 The last card I'll show proves that Stadium Club can be weird, too: this is obviously a shot from Matt Kemp's fashionable trip to the All-Star Game as a Dodger last year.

Problem is Kemp has since joined -- and been subsequently released by -- the Reds (Short Term Stop!), but Topps chose to stick with this photo because...it's red? Dunno.

Once again, Stadium Club seems to be the runaway favorite for Set of the Year. What I've shown here is only a small fraction of the greatness in this year's gallery (the rest of which I'm hoping to pick up at the local card show next week). It's the kind of set that, well...that causes me to be an irresponsible card-collecting adult, I guess.

Some great photos and a great selection of vintage heroes..i see why you were bugging me to check Targets for the last 2 weeks,haha!

I suppose it could be worse. You could be stuck in traffic with Series 2:

That Kemp might be a photo variation, check the code. The base cards end in 3768, the photo var. end in 3805. BTW, In GA, and just so happens as of TODAY FL opening packs while driving would get you a ticket for "distracted driving".

The German Marquez and Jose Berrios cards are gorgeous. Love that Brooks Robinson card too!

I need to know more about this Law of Blogs. I like what I've seen so far and will abide by such laws when applicable.
Did you unearth a manuscript or something?

When I buy a big haul of cards I put some boxes next to me and hope for red lights to flip through the cards.

"Did you unearth a manuscript or something?"

Yeah, knowing Nick he probably found it and additional Dead Sea Scrolls for a dime each at a card show.

"The law of blogs" - Your ideas intrigue me and I would like to subscribe to your newsletter...

I've opened cards while stuck in traffic way backed up on a bridge waiting for customs while traveling home from my PO Box once.

Just when I think I've seen all the cool cards for this year's Stadium Club, another few pop up. In this case that Didi Gregorius, Canseco, and Taillon. Good night, is there a just okay card in the set?

I don't think I'd be able to wait until I got home/off the road to open these beauties, either. These cards are fantastic! But the Pedroia makes me sad, because that's basically all he's done for the past 2+ years.