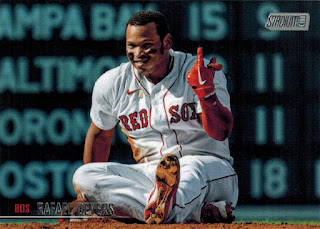 Ever since Target stopped carrying cards, I've realized how closely opening packs made me feel attached to the goings-on of the present hobby.
Over and over again during the past few months, I've had multiple Oh, THIS set is out? or That's out already? moments. I have almost no idea what's going on as far as upcoming releases and other card events. 2021 has just felt like so much of a non-year for current card collecting. I've been buying most of the newer stuff I need on Sportlots because I'm not refreshing Target's card page every two minutes or paying for an overpriced blaster online.
There's a compelling argument to be made that this is all a blessing in disguise. Buying singles online is the smarter financial choice, and something I should've been doing long ago. And there aren't many sets around now that I feel any real need to be attached to - I had absolutely no misgivings about cherry-picking all my Series 2 needs, for example.
But Stadium Club is different. 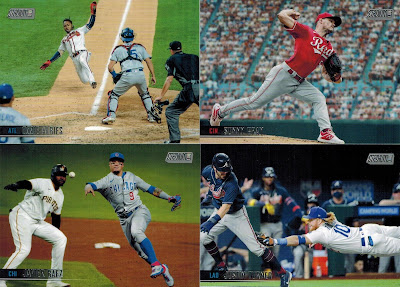 I've always felt a certain camaraderie with Stadium Club - it's one of a dying breed of sets that I truly believe Topps designs with actual collectors in mind.
I've also bought way too many packs of SC over the years, especially when you consider I got a good 75 percent of the 2021s I needed for 18 cents a piece on Sportlots without buying a single three-dollar pack with 5 cards inside. 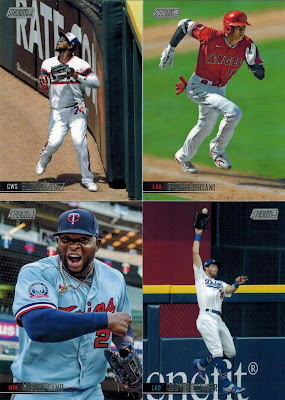 But while I would end up picking most SC singles at card shows and wherever else, the packs were what ignited that perennial fuel for this lovely set - seeing all those cards for the first time is a thrill like no other, and it's gone now.
So maybe all this is gaslighting me into thinking Stadium Club has lost a step this year. But I'm not as into 2021 SC as much as I've been in seasons past. The easy explanation for this is the huge cutback in baseball photography thanks to the pandemic, which thus means not as many exciting and noteworthy shots at Topps's disposal. A lot of the cards in this year's set have that kind of Flagship-ish repetitive feel to them.
Of course, not all 300 cards can be museum pieces, but the ratio between great images like these vs. ordinary action shots just seems way down this year. 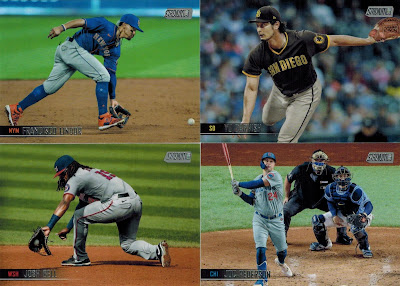 It's still weird to me that Stadium Club, of all sets, also provided me with my first cards of quite a few guys in their new (albeit airbrushed) jerseys. 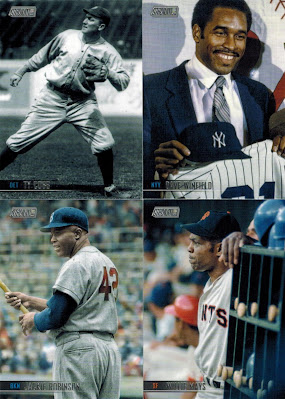 Even the legend cards seem a bit phoned-in - that Jackie Robinson has to be a bad colorization job, because I don't think the Dodgers ever had red numbers on their jerseys.
But this isn't to say that 2021 Stadium Club is a dud, by any means - it still skies leaps and bounds above most of what's out there these days, and as per my yearly tradition, I've assembled my ten favorites from the fun stack of 18-cent masterpieces I bought online. 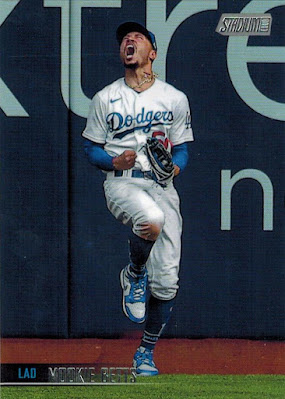 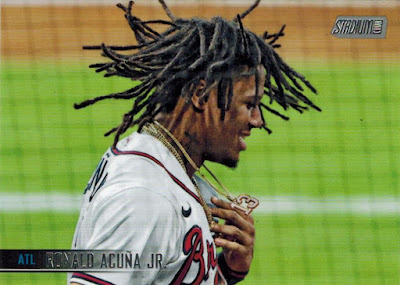 #9 -- 2021 Stadium Club #57 Ronald Acuna Jr.
I really hate that this guy tore his ACL, because baseball's sure gonna miss his talent and his obvious love for the game while he's on the shelf. 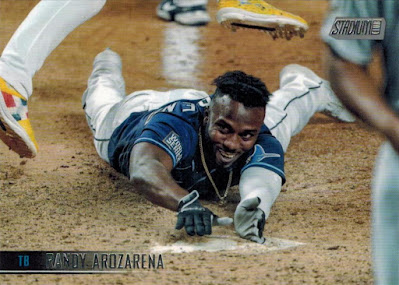 #8 -- 2021 Stadium Club #210 Randy Arozarena
I tend to gravitate towards cards that can be immediately placed to a specific moment in time, and thus this card is a fitting monument to Randy Arozarena's stumble and slow crawl to home plate in one of the greatest World Series games we'll ever see. 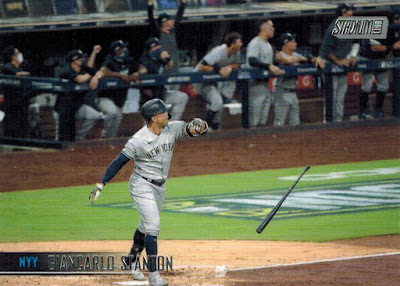 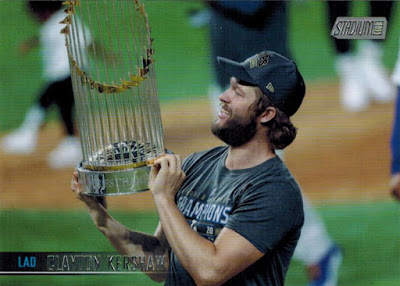 #6 -- 2021 Stadium Club #71 Clayton Kershaw
Kershaw has long been a Stadium Club darling, and it's nice to see his long-awaited championship run documented in this year's set. 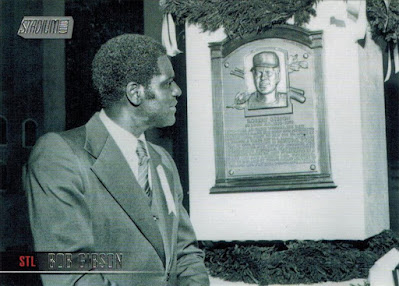 #5 -- 2021 Stadium Club #189 Bob Gibson
Seeing Bob Gibson's 1981 HOF enshrinement in black-and-white is a bit jarring - and a curious choice by Topps - but everything else about this card is perfect. 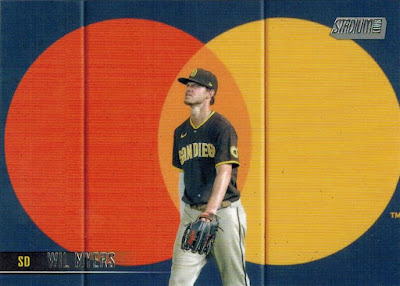 #4 -- 2021 Stadium Club #144 Wil Myers
Me: I hate the constant assault of advertisements in today's sports - one can only stomach so many Honda Game Breaks™ or State Farm Calls to the Pen™ or other sponsored drivel in a three-hour baseball game.
Also me: I am hopelessly in love with this perfectly-framed and immaculately-timed baseball card, sponsored by MasterCard™. 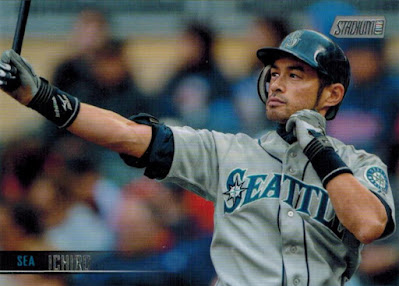 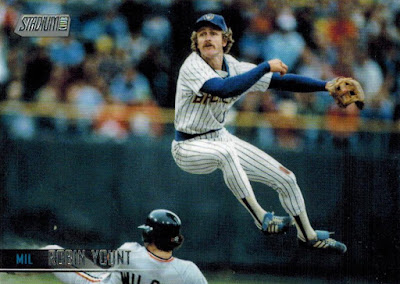 #2 -- 2021 Stadium Club #253 Robin Yount
You don't get a lot of glimpses of legends in the field on baseball cards these days - how many of Babe Ruth's card show him with a glove? - which makes this Robin Yount double dip so pleasing. 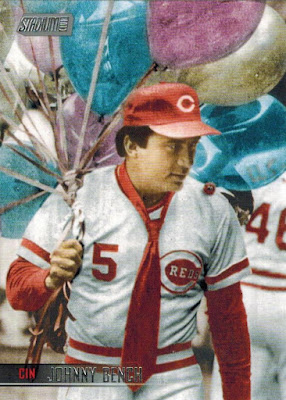 #1 -- 2021 Stadium Club #197 Johnny Bench
I realize now what's missing in 2021 Stadium Club - there's not a whole lot of goofy here.
Granted, there weren't a lot of chances to be goofy in 2020. No weird pregame ceremonies or wild celebrations. But still, this is the only genuinely wacky card in this year's Stadium Club, the only one that made me sit and laugh softly to myself. And I love every last bit of it.
Putting these top-10 lists is often an agonizing affair, but Johnny Bench and his everyday balloons are the easy #1 here in 2021, the far-and-away king of what, for many reasons, was a curious year for my relationship with Stadium Club.
Posted by Nick at 5:57 PM

The Arozarena is my favorite, with Mookie and Wil Myers also finishing on the podium. I agree with you take on the Myers card 100%. I'm not a fan advertising on my cardboard, but that one is two perfectly timed and framed!

Speaking of cake, I'm eating a piece right now. I showed my TSC Braves last night, but like you I loaded up on those .18 ers too. I sent mine to my "box". Can't wait to see them even though I know the usual high quality isn't quite right this year. Still want them in my hands.

Ten minutes after that photo was taken, Bench took a kid into a sewer.

It’s amazing how some of these photos are older but they’ve been cleaned up so well that you almost don’t recognize them as being from the ‘60’s or ‘70’s.

The Stanton is my favorite.

Don't you know you're not supposed to like Mookie screaming photos? (My commenters are the best).

I talked to someone today who doesn't like Stadium Club. I didn't think those collectors existed. ... I cut back on Stadium Club around 2017 or so. Still love it, but it just gets to be a lot of the same, even if it's the same greatness.

Year in and year out... the Stadium Club base set impresses. I just picked up my first blaster of 2021 and it's a box of this stuff. I'd be happy pulling any of these, but the Bench, Yount, Stanton, and Betts are my favorites.

P.S. First time I've seen the Myers on a blog. That's another card I hope is in my blaster.

That Wil Myers card seems like a Venn diagram meme waiting to happen.

This year in baseball cards has really been slipping by me, mainly because there's no sense of discovery. There's usually that moment of "I don't generally collect those cards, but WTH, I'll buy a pack and see what they're like this year".

Some cool card again this year from Stadium Club. I really like the Yount.

Stadium Club always looks good. And that Bench is pretty awesome. I don't think I've ever seen baloons on a card before

In researching a post for my baseball blog, I realized Alex Liddi is playing in the Mexican League right now. I had no idea he was still around. Jumbo Diaz is another guy who's playing in Mexico. And Yasiel Puig and Addison Russell and Bartolo Colon. Here's the link to the post if you're interested:https://johnsbaseballblog.blogspot.com/2021/07/mexican-league-haven-for-former-greats.html

I don't usually like the retired players cards but good lord that Bench is awesome.

These seem more like someone's personal photo collection than baseball cards. I don't dig it.