My top five Dave Stewart cards, for our birthday 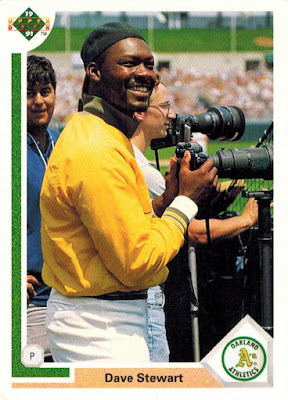 Yours truly turns 29 years young today.
I share my birthday with a handful of ballplayers I like and collect -- Josh Reddick, Miguel Batista, and Daniel Mengden, to name a few -- and a few non-baseball notables as well (Smokey Robinson, Carson McCullers, and Nicholas Copernicus are an eclectic February 19th trio). But whether within the sport or not, I think the person I'm most proud to share a birthday with is Dave Stewart, who turns 64 today.
I had a bit of a DUH moment recently when I realized I didn't have a ton of Stewart's cards, and had never really made much of an effort to chase them down despite our close personal relationship (or at least that's how it feels when you share a birthday with someone). Over the past few months, I've catapulted him higher on my player-collection hierarchy, and bought up as many of his cards as I could find.
I've finally gotten to the point where I feel like I can piece together a viable Top Five list of Stewart's cards -- so, in honor of our birthday, here's my five favorites. 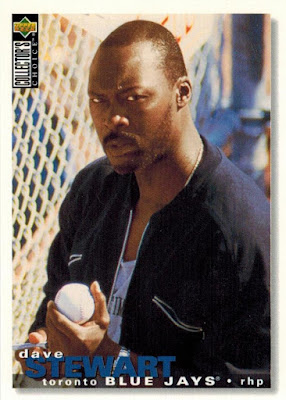 #5 -- 1995 Collector's Choice #151 Dave Stewart
When I think of Dave Stewart, I think of fear.
Three people ended up in the hospital just looking at this card. 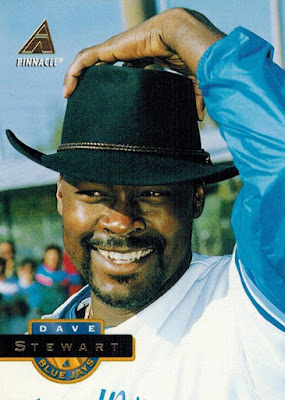 #4 -- 1994 Pinnacle #374 Dave Stewart
While it seems to be a general consensus that Stewart was one of the scariest dudes to ever step on to a pitcher's mound, and despite what the last card might suggest, a lot of companies chose to show his lighter side during his career.
Example: here he is in a cowboy hat, for some reason. 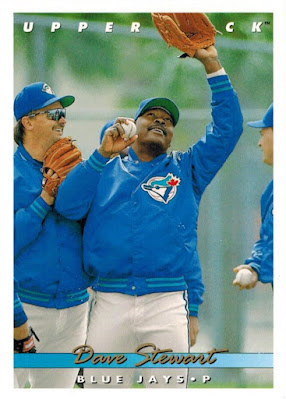 #3 -- 1993 Upper Deck #546 Dave Stewart
You'd be hard-pressed to find a set that features players having more pure, candid fun than 1993 Upper Deck, so it makes sense that they captured the normally intense Dave Stewart in a lighter moment with his teammates here. 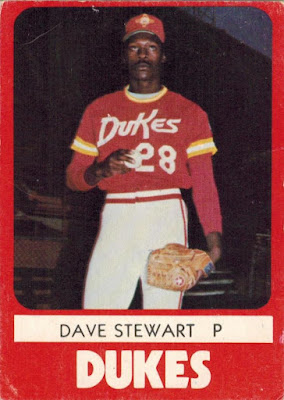 #2 -- 1980 TCMA Minor Leagues #174 Dave Stewart
I remember seeing this one on a couple different Dodger blogs during my time here -- namely Night Owl's -- and thinking to myself now THERE'S a great card I'll probably never own.
Imagine my surprise when it fell out of a random 50-cent bin at a card show a couple years ago, which I suppose means I owe those fickle cardboard gods a giant favor. 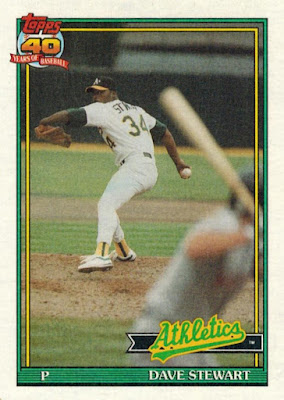 #1 -- 1991 Topps #580 Dave Stewart
Unlike a lot of the Dave Stewart cards in my collection, I've actually had this one for a long time, and there's never been any question about its beauty.
Photography like this is why '91 Topps seems to be one of the more universally appreciated sets around -- there's something for everyone here. But even the most fantastic sets have a handful of cards that still manage to stand out against the general greatness, and to me, that's exactly what Stewart does in 1991 Topps (I feel sorry for that fuzzy hitter every time I look at this card). No matter how long I keep accumulating more and more cards of fellow birthday dude Dave Stewart, I can't imagine anything topping this one.
So, here on February 19th, I say happy birthday to me, happy birthday to Dave Stewart, and happy birthday to everyone else who came into this world on this otherwise ordinary winter's day.
Posted by Nick at 5:30 PM

Happy birthday Nick! Hope you get tons of cards.

Have a good one.

Wow,those are all FANTASTIC cards!!
You'll never be as intimidating as him (haha!) but happy birthday to two cool dudes!

I think my favorite Dave Stewart card is his 1988 Topps with the yellow windbreaker. I also like his 86 Topps that shows him on the Phillies. It's just a regular head shot, but the colors really work well together.

Great selection of cards there, and happy birthday Nick!

How the hell did you get to be 29? Happy birthday!

Dave Stewart's cards have always been among my favorites. I just wish he stayed with the Dodgers so all that greatness could've been in a Dodger uniform. We just have his super-excellent '83 Topps card.

Happy birthday. No arguments about that #1. I sent out to a private signing he was doing in December and that was exactly my choice.

Happy Bday! Stewart's stare from the home plate camera on television was so bad a$$. I loved watching him pitch. I didn't know he had such a fun loving side depicted on these cards!

I'm surprised to see such a wide variety of poses from Stew. Nice to see he's not always so menacing lol.

Happy birthday Nick! Very cool that you share your birthday with Stewart. He's sort of a legend for the A's... which has made him a fan favorite in my neck of the woods. Hard to argue with your #1 pick. That's a great looking card.

Geez, Stewart sure had some great cards!!

happy birthday nick! i was happy to see stewart become so successful with the a's and jays. had the dodgers not won in 1988, however, i would have been less pleased.

Hope you had a great special day, Nick.

Great bunch of cards. Another fun thing about Dave Stewart is he kinda has a Mike Tyson thing going where they look intimidating as hell, but when you hear them speak they've got high pitched voice that you weren't expecting.