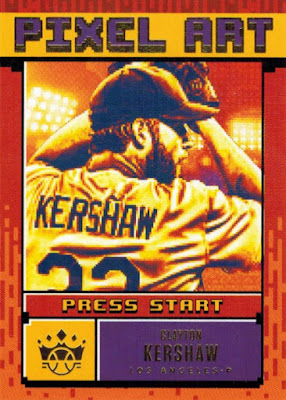 Big news from Dime Boxedonia this past weekend: I bought my first car!
The car I'd been using was a hand-me-down from my mom, and while it's gotten me where I needed to go over the last few years, it was obviously coming to the end of its reliable lifetime (remember that time it died on me on the way to a card show?). So rather than wait it out and stress and spend who knows how much fixing it, I decided to take the leap and buy my first car. I'm not a gearhead in the slightest, and all I really ask out of a car is to not have to worry about it -- which is why I'm thrilled to finally have a better one now.
But still there's this part of me that's a bit bummed about leaving the old car behind -- in a couple days, I'm gonna be clearing all my stuff out of it, locking the door, and saying goodbye forever, and it makes me kinda sad to think about. 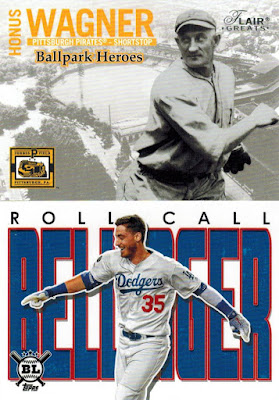 Out with the old, in with the new, as the old saying goes -- but I often worry the old goes away without being properly appreciated.
This is a problem with my baseball card collection, too. Part of me wonders if I'm spending too much time with the new cards I get -- sorting them, cataloguing them, etc. -- and not enough time appreciating the ones I already have. Sometimes I feel like there's something lost once a card gets socked away into a nine-pocket page. It seems like a silly thing to stress about, but it really does seem like I spend way too much time maintaining my card collection, and not enough time enjoying it.
But I suppose there's a reason for that -- with people like Julie of "A Cracked Bat," and her famous Pick Pockets program, I can't be faulted that much for oohing and aahing over all the new cards people are (somehow) willing to send me for free. 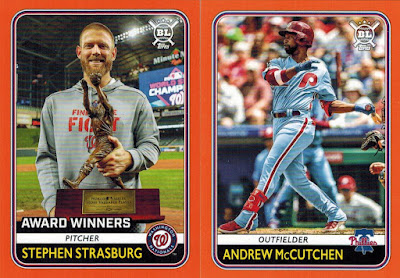 Luckily, cards don't have engines that sputter and need costly repairs, so there's still plenty of time to give them some love.
Everything you'll see here were all part of various Pick Pockets parades on Julie's blog over the last few months -- including these terrific Big League parallels that remind us how fun cards with borders can be. 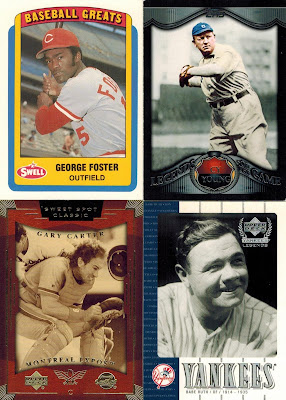 Pick Pockets, like dime boxes, are mostly good for a random scatter of anything and everything, cards I need and cards I didn't know I needed. 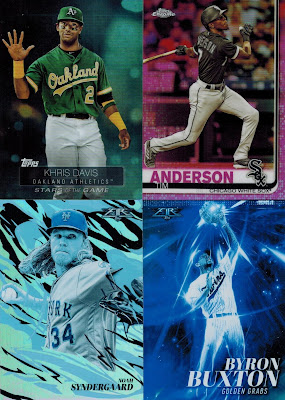 Some shiny and just generally loud latest-and-greatest stuff here -- if nothing else, Topps Fire makes up for the lack of color in most modern sets. 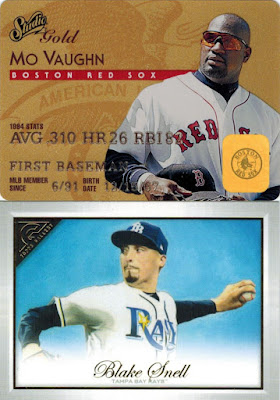 A couple goodies for a couple of my bigger player collections, and why did we stop making those credit card/baseball card combos again? 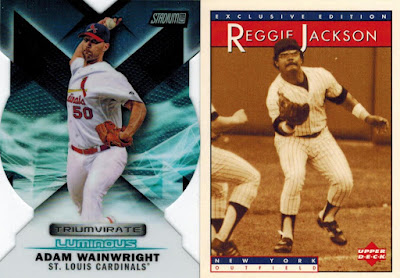 Weirdly-shaped cards: good in hand, bad for binder pages -- that Wainwright seriously caught on every corner and jutting edge when I was trying to slip it into a page.
That Sonic-issued Reggie oddball is awesome on its own, but it earns even more points by being one of the few cards I've ever seen of him fielding. 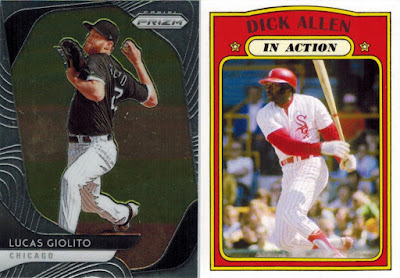 Prizm is the poster child for cards I slide into my binders and almost never look at again -- but that's how having a player collection goes sometimes.
And if that Dick Allen doesn't look familiar to you... 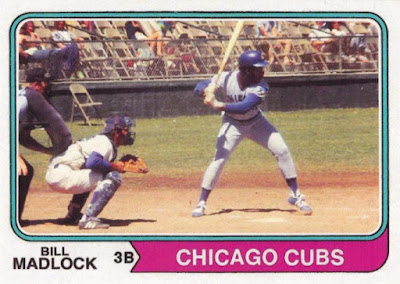 ...I wouldn't blame you, because it's actually a custom made by the blogosphere's own Gio, customs that were generously made available by Julie in one of her recent Pick Pockets postings.
Bill Madlock has a card in '74 Topps, but it's a "Rookie Infielders" combo he had to share with three other guys, so it's nice to see him get a solo card-that-never-was here. 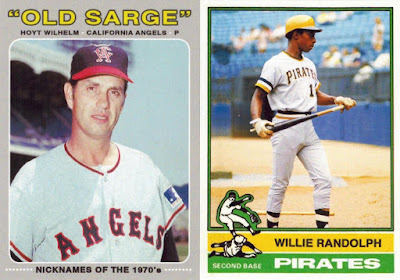 Willie Randolph's in the same boat as Madlock -- his rookie card is a four-player rookie combo, and best I can tell his brief Pirates career was never documented as a standalone card by Topps (the only one I've seen hails from '76 SSPC).
And yes, Gio's customs even extended to King Hoyt as well, and a much needed substitute considering Hoyt's lone Angels card might be the worst of his long Topps run. 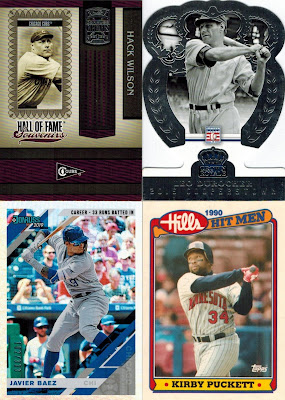 I actually received the spoils from Julie's latest Pick Pockets party a few days ago, and it featured a usual mashup of current stars and legends alike. 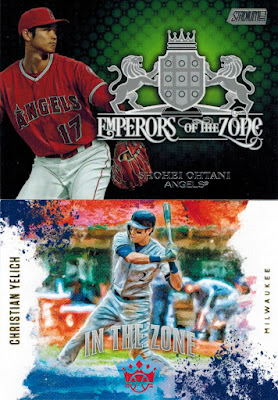 Not my favorite insert sets of the year, but a couple I'm happy to have for two of my top-tier current player collections. 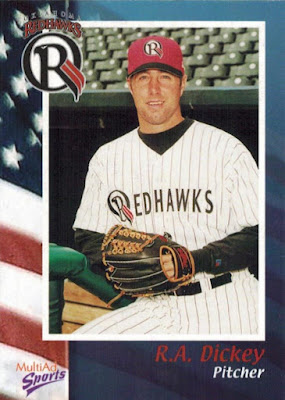 Remember when a nearly 40-year-old journeyman knuckleballer won the Cy Young a few years ago? That was pretty great, right?
I feel like R.A. Dickey is starting to float into forgotten territory in the annals of baseball lore. I don't want to see that happen. His unexpected ascent is still one of the better things I've seen in my years of being a baseball fan, but I rarely hear his name anymore. Guess there's always that 100-MPH fireballing prospect waiting in the wings, ready to make someone else drift into history.
Part of collecting cards is keeping those good times alive. That's why I collect Dickey, and why I was so thrilled to pick this minor league oddball from Julie's pocket. Thankfully, cards, unlike cars, don't have an expiration date, and aren't in much danger of being whisked away for the new model. The legend of R.A. Dickey is forever alive in my collection.
In the meantime I'll be bidding adieu to my old car, clearing out all my CDs and pop caps and memories, wondering why I'm afflicted with this sickness of attaching myself to inanimate objects.
Posted by Nick at 5:30 PM

Congrats on buying your first car! Hopefully it lasts longer than my first car did.

The Gio cards are sweet, naturally.

I was just thinking about R.A. Dickey the other day, in terms of maybe trying to add to my modest collection. That's a great card... it's always weird to see him clean-shaven (like on his 1997 Bowman card)

Ever since pushung your car to the side of the road in a snowstorm on the way to the card show... I've waited for this day,haha! Looking forward to seeing the bad ride!

...and that Carter card is intense!

I remember when Snell was a Ray. Times have changed.

Julie's pockets are always lined nicely. As for the car...congrats, be nice to it.

It's hard to say goodbye to your old car. My first car I actually ever officially bought was a 2005 Chevy Cobalt. I'll be honest, I may have shed a tear or two when I had to say goodbye to it. I had some great memories with that car.

But, congrats on buying a new car! And also, looks like you picked some good stuff from Julie's "Pick Pockets" deal!

i finally got a new (...well, new to me...) car last year after chugging around the same ride for 20 years. it was a little more difficult than i thought in moving on, but i'm happy to have operable windows and a heater for the cooler winter evenings, so congrats on the new ride!

not too many beardless Dickey's in the card wild, had to do a triple take to make sure it was actually him.

Congratulations on purchasing your first new car. I've only purchased three new cars in my lifetime and I'm still driving two of them right now. One is turning 15 this year... the other is turning 13. I'd like to go out and buy a new one, but it's hard to justify doing that when both are running so well.

Congrats on the new car! May you have it longer than the one it replaces!

I know what you mean about not always appreciating the cards you already have. I'm just taking January off from getting cards. I'm planning to go through more of my old cards, enjoying some, and hopefully selling some of the cards I don't enjoy.

I think I might have already said this in a comment, but I'm not sure where it was. So whatever.

Here's hoping your new car lasts for a good long while. Car shopping is near the top of my "least favorite things to do" list, so I hope you don't have to do it again anytime soon.

Congrats on the new car! Those customs look better than the Topps '70s cards I've been seeing on the blogs.

Excellent post! I'd guess most collectors have similar feelings when it comes to neglecting parts of their collection, so you're in good company.

As for the new car, congratulations! You'll always have the experiences to keep from the old one, but now you've got new memories to make.

Lots of great variety with those cards! Congrats on the new ride - may it be safe and reliable.

My first car was a 62 Volkswagen Bug, stick shift, moon roof and a 1 gal reserve tank. It got about 40 miles per gallon. I miss that car.

I always tell everyone my first car was a brand new, shiny red 'vette. And it was. A Chevette.

I second GCA...where's your car?

Congrats on the new purchase...may it be trouble-free for many, many years.

Read this a while back but wasn't able to comment at the time, wanted to circle back around and say congrats on the new vehicle! They're a blessing and a curse at the same time, at least that's how I feel about cars, but they're necessary and it always feels good to get a new one.

Congrats on the new ride!

Am short of words for the amazing profit you helped me earn in just a week with bitcoin trading am so sorry I doubted at the beginning, I invested $200 and earn $2,500 in just one week, and kept on investing more, today I am financially successful, you can contact him via email: carlose78910@gmail.com Via whatsapp: (+12166263236) I advice you shouldn't hesitate.
He's great