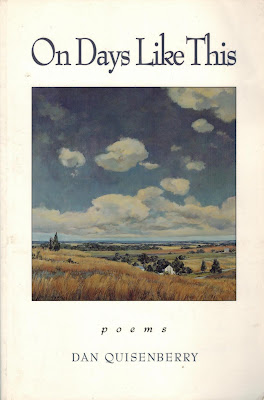 Working retail in the pandemic age has been a bit of a nightmare, but something cool did happen at my bookstore job a few weeks ago, not long after I returned to work after the quarantine.

One of the perks of working behind-the-scenes in a bookstore is that we booksellers get to see what comes in before it ever hits the sales floor, which, in some cases, means setting stuff aside that we might want to buy ourselves at a later date (not surprisingly, my book collection has grown massively in the last year or so because of this). A few weeks ago, I was browsing the stack of poetry books ready to go out for sale when I came across this title, a book I'd never heard before and written by one Dan Quisenberry.

As a baseball fan, the name, of course, immediately rang a bell -- but I figured it must be a different Dan Quisenberry, because surely I'd know if that Dan Quisenberry had published a book of poetry. 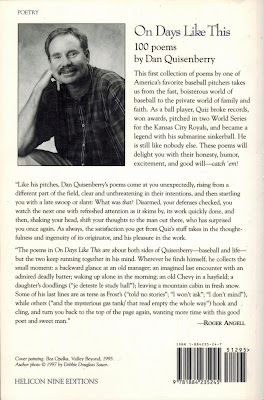 So I flipped the book over and saw...no, yeah, it's that Dan Quisenberry(!), looking very authorial in a button-up flannel shirt compared to the usual sight of him a Royals jersey.

I was (and still am) flabbergasted that I never knew Dan Quisenberry wrote a book of poetry! Needless to say, I put it on hold for myself and bought it a few days later. I plan on tackling the book as a whole very soon, and of the few random poems I've read thus far, it certainly seems like I'm in for a treat.

Baseball and poetry don't often go hand in hand -- athletes in general aren't often described as very pensive types of people -- which made it all the more shocking to discover a ballplayer I've long admired was part of the small club of Baseball Literati. 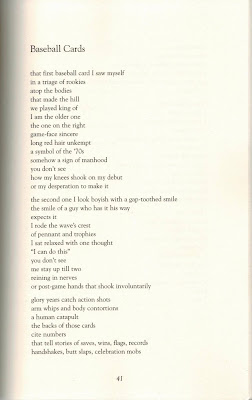 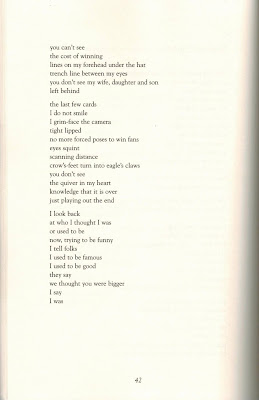 (As luck would have it, one of the first poems I flipped to upon discovering Quisenberry's book was a brilliant piece about, yes, BASEBALL CARDS!) 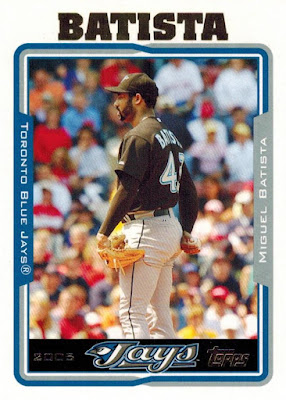 Until recently, I collected cards of Miguel Batista for two specific reasons: 1) I share a birthday with him, and 2) I love those few relievers per generation who seem to hang around forever, and Batista's definitely one of those guys -- he debuted the year I was born (1992) and didn't retire until 2012. 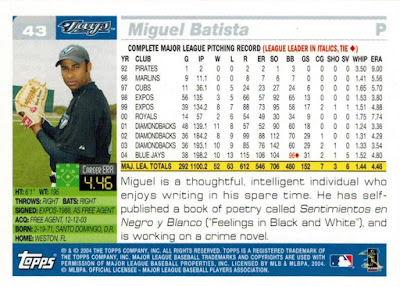 Upon flipping Batista's 2005 Topps card over, however, I discovered a third reason to collect him: he's a published author!

Best I can tell, he's released a couple books of poetry (in Spanish), and did indeed finish the crime novel that's referenced here (called The Avenger of Blood) -- another member of the Baseball Literati! 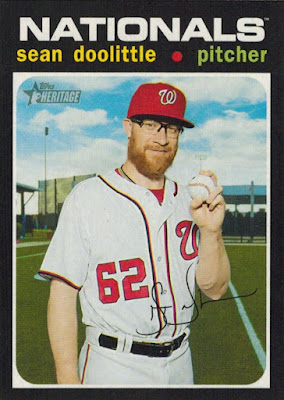 Sean Doolittle has quickly become one of my favorite current ballplayers, in no small part because he's a voracious reader who frequented independent bookstores during Nationals' road trips last season.

I actually follow him on Goodreads, and we seem to like a lot of similar stuff -- in an era where sports and the people who play them seem to be moving more and more toward intellectual oblivion, I wish with every fiber of my being that more ballplayers were like Sean Doolittle. 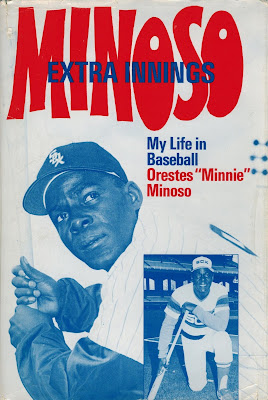 I suppose you could say I collect books kinda like the way I collect baseball cards -- I treasure books as objects themselves, not really paying much mind to condition or the wear-and-tear of time.

I'm one of those book hoarders who already has enough books to read for several lifetimes, and while I do enjoy antiquarian and/or collectible books (valuing old titles is actually part of my current bookstore job), I don't often set my sights on those. Much like baseball cards, those are for people with more time and much deeper pockets than me.

That said, my book stash does include a few things that might be described as collectible to the masses, and some even involve baseball, including this Minnie Minoso autobiography I've owned since I was a kid... 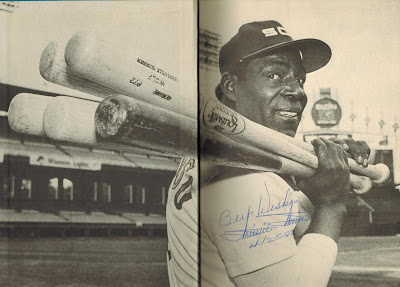 ...a book I've always treasured since it's signed by Minnie himself on the inside cover!

I admittedly haven't read the book itself yet -- it's in that ever-growing I'll-read-it-one-day pile -- but it's a proud part of my collection nonetheless. I vaguely recall my parents finding it at a garage sale a long time ago, but they'd be the ones to confirm that story.

Like the baseball cards I've owned and loved since my youth, this book will forever remain a cornerstone of my collection. 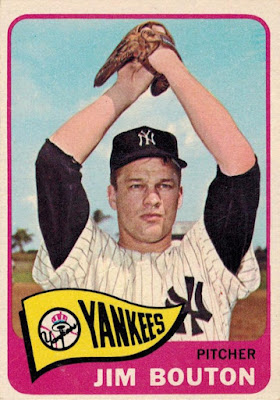 Of course, no discussion of the Baseball Literati is complete without the obligatory Jim Bouton mention -- though it's had some competition with a few recent reads, Ball Four still remains my all-time favorite baseball book. 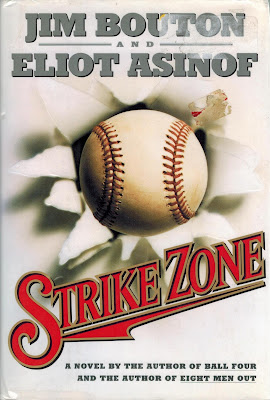 While I do own a copy of Ball Four -- a dust-jacketless '70s hardcover I've read and reread -- it's probably not even the most desirable Jim Bouton book I own from a collector's standpoint.

I bought this book during a trip to a suburban thrift store with a friend a few years ago. The author(s) instantly grabbed me -- I had no idea Bouton ever ventured into the world of fiction (along with Eight Men Out author Eliot Asinof), but unlike Dan Quisenberry's poetry book, I think there's a good reason I haven't heard of this one. I've read a few passages from it, and it's bad. Just...really bad. Not anything I'll be reading anytime soon.

So, then, that begs the question: why do I still have this book? 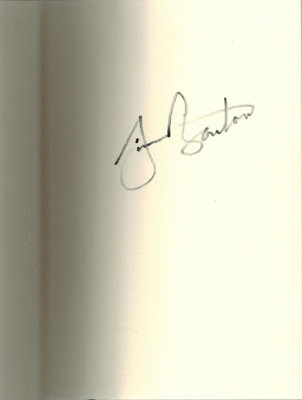 Because it's signed by Jim Bouton, of course!

If memory serves me right, I paid two dollars for this book, and I didn't even notice it was signed until I was in the thrift store checkout line, waiting to pay. I initially wanted it for the curiosity of Bouton's forgotten novel, but I've kept it all these years because of the signature inside. It's a strange, off-kilter member of what I like to believe is a formidable collection of books.

And as someone with a deep joy and respect for the world of literature, I nod silently from behind the page at the few introspective souls who can call themselves members of the Baseball Literati.
Posted by Nick at 5:39 PM

Man, quiz was in a place when he wrote that poem. "Glory years catch action shots" is a great line though. I've got too many baseball books in my library. Maybe I'll send you a list in case there's some you'd like to read.

It takes me 6 months or more to read a single book these days. So I always have an "I want to read" list on my bookshelf.

If you grew up watching Quisenberry, you'd know he's exactly the type of ballplayer to have written a book of poetry.

I’ve read a poem from Quisenberry in a photo book featuring a bunch of Ron Modra’s photos, and his writing is spectacular. You should do a review of the book.

I can confirm on the Minoso book..your mom found it!

The signed books are a treat for sure.

I love the phrase "a triage of rookies" in that Quiz poem. Of course, "triage" doesn't really mean "trio", but poetic license. But now I want to declare that the collective noun. You know, a pride of lions, a murder of crows, an unkindness of ravens, and a triage of rookies. "Every time I bust a box of Update or Heritage High Numbers, I'm bombarded with a triage of rookies."

I don't read books very often... and I don't think I've ever read a poetry book from cover to cover. But that book by Quisenberry looks interesting.

You should check out the book "O Holy Cow" - Phil Rizzuto's broadcasting turned into poetry.

Thanks for excerpting Quiz's book. Super interesting. Agreed on the "triage" of rookies poetic license. I also like the implication that rookies are all still in triage for the majors.

The Quiz is a fave of mine, and I never knew about his poetry book either! What a find. I wish I could find a copy of that one!