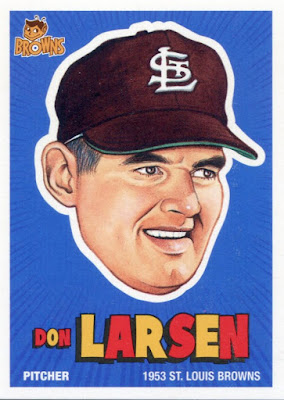 One of the last packages I received before my recent hiatus came from the man they call Tony Burbs, a fellow Cubs comrade from the terrific "Wrigley Roster Jenga" blog.

I feel kind of bad that I'm only getting around to posting this three-month-old batch of cards now, because holy cow was this a great trade. It was about as oddball flooded as any package I've ever received.

I was sort of a board game connoisseur as a kid -- I guess I still am -- but Jenga was never one of my favorites, mostly because I sucked eggs at it. In some ways, I kind of felt like I was playing an odd, baseball card version of Jenga while digging through the cards Tony sent.

One by one, I peeled off each card, waiting for the one that would knock everything over. This spiffy Don Larsen (floating head alert!) was a nicely calculated first move that comes from an outstanding St. Louis Browns-exclusive set that Tony posted about a while ago.

Mr. Perfecto was a Brown for exactly one year (1953, his rookie season) before the team moved to Baltimore. 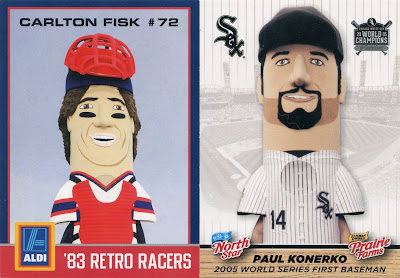 Tony sent copies of these to a few other bloggers, and I'm happy to say that I was one of the lucky recipients.

To the non-collector, these are nothing more than ads for food chains. Strictly recycling bin material. But we collectors know better.

These are baseball cards, and glorious ones, at that. 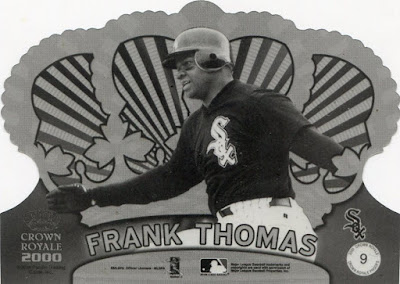 Tony's next move in this game of oddball Jenga was a strange one.

This is easily the flimsiest baseball card I own. It's acetate, and so transparent that it took me a minute to make out the player -- the Big Hurt -- on the front of it. It's such an odd one that debated on whether or not it was even binder material for a moment. (Of course it is.)

Not surprisingly, it came from Pacific. 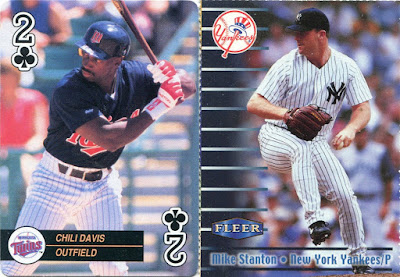 Playing cards and magazine inserts made up the next two moves.

I'm not sure that Tony knew it at the time, but Mike Stanton is one of those longtime middle relievers that I love to collect (think Mike Timlin, Arthur Rhodes, etc.).

Middle relief is probably the least represented role as far as baseball cards go, so it was nice to see someone like Stanton get a little pub in the oddball world. 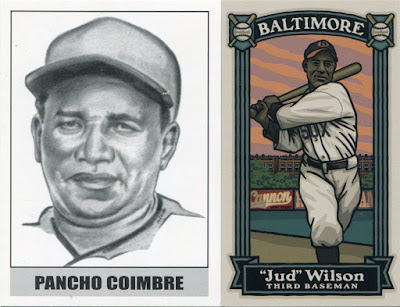 These oddballs are so odd that I don't have a single bit of information on them.

All I know is that Pancho Comibre was a Mexican League star, and Jud Wilson played for the Negro League's Baltimore Black Sox.

The oddball tower was very close to tipping over at this point. 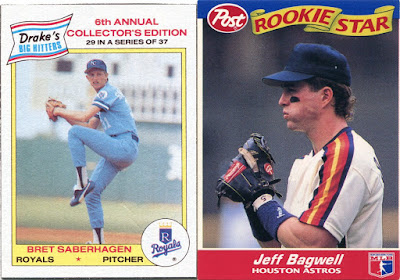 Then came a couple more conventional moves with these food-based oddities.

Food is responsible for the majority of the oddballs out there, and Drake's and Post are some of the better known ones around. 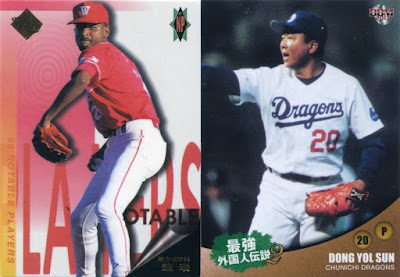 Tony even added a couple pieces to my tiny Japanese card collection with these two.

I don't know who either of these guys are, but that's really irrelevant when you think that these cards traveled across the Pacific to get here. 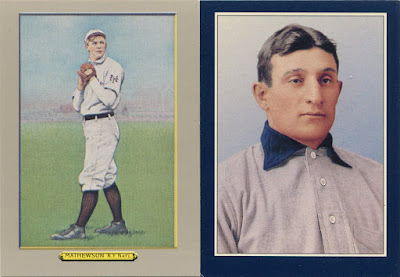 I'll eventually own these cards when I'm a billionaire.

Until then, I'm happy with the reprints. 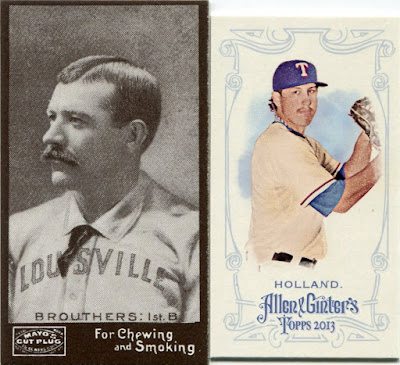 Minis are most definitely welcome to play this game.

A&G might not be an oddball set, but I like to think that the minis are among the last oddballs we have left. 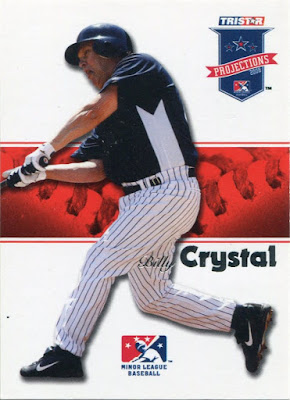 Yes, believe it or not, here is a baseball card of Billy Crystal. Crystal's lone spring training at-bat with the Yankees in 2008 (a strikeout, of course) was commemorated with this card from the good people at Tristar.

I remember when it hit the market. I made a push to snag a copy, failed, and then kind of forgot about it until Tony came along seven years later.

I would be proud to partake of your pecan pie. 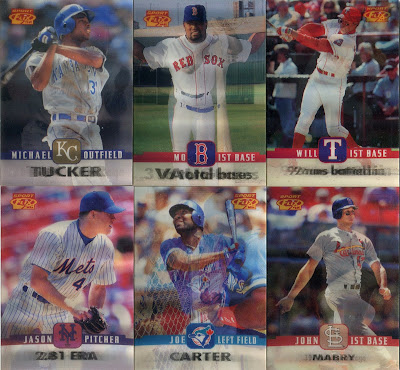 I remember Tony digging up a goldmine of these Sportflix singles from his local thrift store a while back.

I pounced when he asked if anyone wanted them, because, in my world, it's something of a crime to not claim 3-D singles when the opportunity arises. 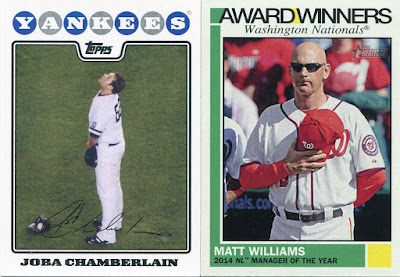 The potential for sudden disaster seemed to be calming with these two hits to my "anthemic" mini-collection.

The Chamberlain actually comes from the 2008 Topps Yankees team set, and is one of the few that features an (odd) image that differs from his standard 2008 Topps card. I specifically claimed the anthem shot of (ex) Nats manager Matt Williams from Tony because I can't remember the last time I've seen an anthem card in a current product. 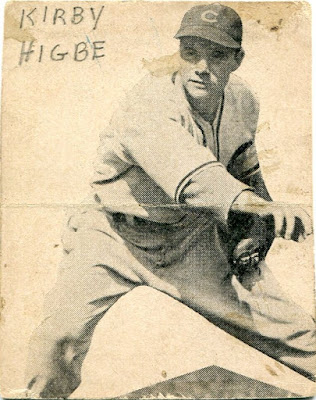 The pieces hit the table with a thud once this beauty fell out of the package.

I remember Tony posting about finding a small lot of these oddities at his LCS a while ago (though I can't find the exact write-up now), and he was nice enough to shoot this Kirby Higbe my way. It looks to be some sort of playing card (the back features a very playing card-esque design, like this), and the version I own appears to have been trimmed at some point.

I'm guessing this card came out when Higbe was still a Cub, which means that it was released anywhere between 1937 and 1939. Higbe wasn't the greatest human being (he started a petition to have Jackie Robinson barred from playing for the Dodgers in 1947), but I'm still glad to have this pre-war oddball in my collection, no doubt.

Higbe may have sent the tower sprawling, but the good news is that that's a good thing when it comes to this game.

You can't lose at Oddball Jenga.
Posted by Nick at 5:34 PM

Glad you liked these; I figured you'd appreciate some off the wall stuff!

The Jud Wilson appears to be from the Infinite Baseball Card Set. You can check out that blog here http://infinitecardset.blogspot.com.

I'm a big fan of those Pacific Crown Royale Proofs. Although I hadn't seen the Frank Thomas one before.

Of your two Asian baseball cards, I'm pretty sure the one on the left is not Japanese. I don't recognize the uniform or the card brand... I would guess it's Taiwanese, but that's strictly as guess.

The other card is from the 2013 BBM "Legendary Foreigners 2" set... I put the set name in quotes because that just the common translation of the original Japanese name. Most of the players in this set are from the Western Hemisphere, but there are some Korean and Taiwanese players in there as well.

...And I was going to say "Infinite Baseball Card Set" as well, but Zippy Zappy beat me to the punch.

You were in oddity heaven, no doubt! Fantastical package!